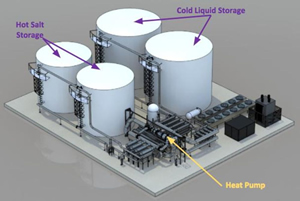 Mark Bergen for Bloomberg Technology:  Alphabet Inc.'s secretive X skunk works has another idea that could save the world. This one, code named Malta, involves vats of salt and antifreeze.

The research lab, which hatched Google's driverless car almost a decade ago, is developing a system for storing renewable energy that would otherwise be wasted. It can be located almost anywhere, has the potential to last longer than lithium-ion batteries and compete on price with new hydroelectric plants and other existing clean energy storage methods, according to X executives and researchers.

The previously undisclosed initiative is part of a handful of energy projects at X, which has a mixed record with audacious "moonshots" like Google Glass and drone delivery. Venture capitalists, and increasingly governments, have cut funding and support for technology and businesses built around alternatives to fossil fuels. X's clean-energy projects have yet to become hits like its driverless cars, but the lab isn't giving up.

"If the moonshot factory gives up on a big, important problem like climate change, then maybe it will never get solved," said Obi Felten, a director at X. "If we do start solving it, there are trillions and trillions of dollars in market opportunity."

She runs The Foundry, where a Malta team of fewer than 10 researchers is testing a stripped-down prototype. This is the part of X that tries to turn experiments in science labs into full-blown projects with emerging business models, such as its Loon internet-beaming high-altitude balloons. Malta is not yet an official X project, but it has been "de-risked" enough that the team is now looking for partners to build, operate and connect a commercial-sized prototype to the grid, Felten said. That means Alphabet may team up or compete with industrial powerhouses like Siemens AG, ABB Ltd. and General Electric Co.  Full Article: