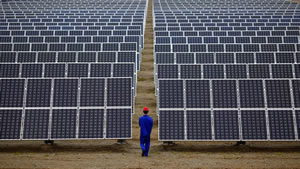 Akshat Rathi for Quartz:  One of the biggest criticisms of the renewable-energy industry is that it has been propped up by government subsidies. There is no doubt that without government help, it would have been much harder for the nascent technology to mature. But what’s more important is whether there has been a decent return on taxpayers’ investment.

A new analysis in Nature Energy gives renewable-energy subsidies the thumbs-up. Dev Millstein of Lawerence Berkeley National Laboratory and his colleagues find that the fossil fuels not burnt because of wind and solar energy helped avoid between 3,000 and 12,700 premature deaths in the US between 2007 and 2015. Fossil fuels produce large amounts of pollutants like carbon dioxide, sulfur dioxide, nitrogen oxides, and particulate matter, which are responsible for ill-health and negative climate effects.

The researchers found that the US saved between $35 billion and $220 billion in that period because of avoided deaths, fewer sick days, and climate-change mitigation.  Full Article: