Yet Another Energy Storage Breakthrough Coming, Thanks To “Weirdly Exciting” New Substance 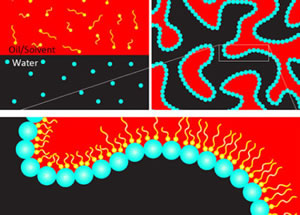 Tina Casey for CleanTechnica:  Energy storage is already accelerating the transition to wind and solar energy, and things are about to get a little more interesting. Scientists at the Energy Department’s Lawrence Berkeley National Laboratory have come up with a new bijel that could have some interesting energy storage applications. They’re still trying to find the right adjectives to describe it, but “weirdly exciting” seems to fit the bill for now.

What, Exactly, Is A Bijel?

Bijel is short for “bicontinuous jammed emulsion gels.” If that sounds somewhat mysterious, it’s really not. You can almost DIY your own bijel right at the dinner table. Here’s the explainer from Berkeley Lab:

Bijels are typically made of immiscible, or non-mixing, liquids. People who shake their bottle of vinaigrette before pouring the dressing on their salad are familiar with such liquids. As soon as the shaking stops, the liquids start to separate again, with the lower density liquid – often oil – rising to the top.

The key word is almost. Those spherical droplets in your vinaigrette bottle are as close to true bijellery as you can get.

The unique feature of bijels is that the two liquids can’t separate. The particles are “jammed” at the interface where they meet. Instead of distinct droplets, they form a web of channels.

That feature provides bijels with a wide range of applications in energy storage and other areas involving catalysis, conductivity, and energy conversion — potentially, that is.

In addition to issues involving the fabrication of bijels, the main catch is that the fluid channels are too wide to be of much use in energy conversion applications.  Full Article:

Posted by mark grogan on 10/17/17, 06:13 PM
Technology is ever evolving, thus it is no surprise to be uncovering new substances along the way that can improve technology further. Mankind has been utilizing technology in various forms, causing demand to significantly increase as people are taking advantage of what it can offer. Down the road, we would need a new addition to increase the capability of the technology that we have been using all this while.