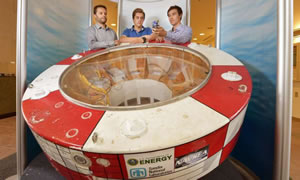 Phys.org:  Compared to wind and solar energy, wave energy has remained relatively expensive and hard to capture, but engineers from Sandia National Laboratories are working to change that by drawing inspiration from other industries.

During a multiyear project funded by the Department of Energy's Water Power Technologies Office, engineers from Sandia's Water Power program are using a combination of modeling and experimental testing to refine how a wave energy converter moves and responds in the ocean to capture wave energy while also considering how to improve the resiliency of the device in a harsh ocean environment.

"We are working to create methodologies and technologies that private companies can harness to create wave energy devices that will enable them to sell power to the U.S. grid at a competitive price," Sandia engineer Ryan Coe said. "By getting more energy out of the same device, we can reduce the cost of energy from that device."  Full Article: