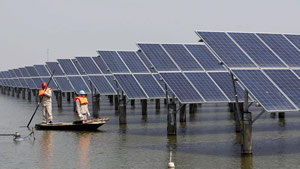 Echo Huang for Quartz:  The world is quickly abandoning coal, the dirtiest of fossil fuels. But that’s not the end of the road for coal mines—in many countries they’re coming back to life as solar farms.

Over the weekend, the world’s biggest floating solar project began operating in the eastern Chinese city of Huainan, which accounted for nearly 20% of the country’s coal reserves in a 2008 estimate. The 150-megawatt (MW) project consists of panels floating on a lake formed in a collapsed coal mine, according to (link in Chinese) the state-owned power company China Three Gorges Corporation, which began building the project in July.

The company said it had spent 1 billion yuan ($150 million) on the project, which it expects to come into full use in May 2018. At full capacity, it’ll be able to power around 94,000 homes. The project sets a new record in its class and will quickly eclipse another floating solar power project in the same city that became the world’s biggest such farm in August. The latter, which can supply electricity to 15,000 homes, also sits atop a former coal mine.  Full Article: