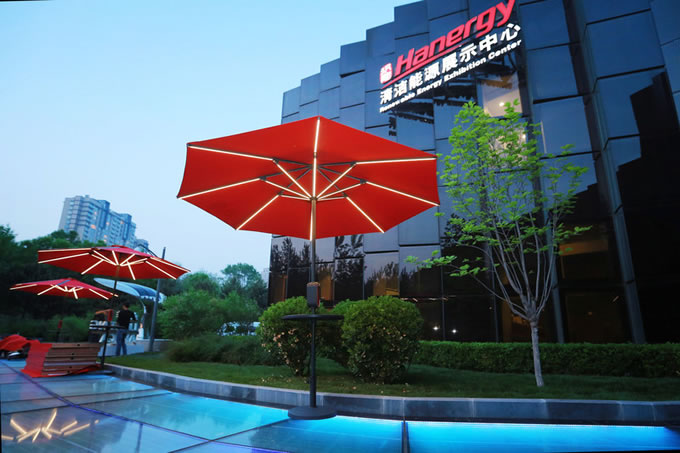 At the launch of its "Lighting Africa" CSR project, Hanergy announced it would donate the first batch of a million RMB (US$160,000) solar-powered umbrellas, or "Humbrellas", to regions of Africa where electricity shortages routinely prevent children from having enough time for study. With Humbrella, children in these regions will be able to enjoy more high-quality reading time.

"Hanergy has been striving to leverage our world-leading thin-film technology to provide accessible and clean energy to the world," said Hanergy CEO Li Hejun. "Humbrella is the latest addition to our growing roster of mobile energy solutions. With our unique technological strength and R&D commitment, we are confident that our products can transform many industries to make them much more green and efficient."

The Humbrella integrates functions including off-grid power supply, electricity storage, night lighting, and terminal charging. It can collect sunshine and convert it into electricity and save up to 40000mAh of power, enough for 10 hours of quality night reading time. In addition to lighting, the Humbrella can charge several mobile phones or small appliances like electric mosquito repellent via 4 USB ports built into the handle of the umbrella. The Humbrella has a diameter of 2.7 meters and weighs only 8.8 kilograms due to Hanergy's amazingly light and flexible thin film solar panels.

With its world-leading technology, Hanergy is helping to transform the construction and transportation industries. The company recently unveiled its next-generation Hantile, an upgrade to the company's revolutionary roofing solution combining thin-film solar panels with traditional roof tiles. Hanergy has pioneered the use of ultra-white tempered glass, which features a transmittance level of 91.5%, and possesses extreme durability and ability to withstand heavy impacts. The single glass Hantile is also highly wind resistant and able to generate power at temperatures ranging from -40 to 85 degrees Celsius, and humidity higher than 85%. The Hantile has a life cycle of up to 30 years, longer than traditional roof tiles.

In terms of applications in the transportation industry, other than developing its own solar vehicles, Hanergy's US subsidiary Alta Devices recently cooperated with German car maker Audi to integrate solar cells into panoramic glass automobile roofs. Hanergy has also cooperated with major bike sharing companies, including Mobike, 99 Bicycle and MTBike to integrate thin-film solar panels into the bodies of more than 15 million bicycles over the next three years.

Hanergy, the world's largest clean energy company, has a comprehensive clean energy solution, covering hydro-power, wind-power, and solar power. Since 2009, Hanergy has focused on thin-film solar power research and development, and is launching a series of products including solar roof tiles, foldable solar-paper power bank, solar backpack, Building Integrated Photovoltaics, solar roads and many others. With a worldwide staff of more than 16,000, Hanergy is devoted to providing the world a clean energy solution for a better life and sustainable world.