National Solar Tour Coming Soon to a Neighborhood Near You 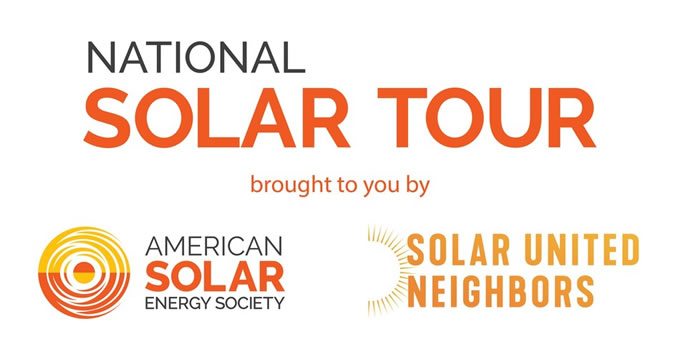 The American Solar Energy Society (ASES) and Solar United Neighbors(SUN) are proud to announce the largest annual grassroots solar event will take place in neighborhoods nationwide the weekend of October 5-6. The National Solar Tour will empower people across the country to learn about solar technology and the process of going solar from their friends and neighbors. The National Solar Tour is the largest grassroots solar event in the nation.

The 2019 edition of the National Solar Tour marks its 24th Anniversary. This is the first time Solar United Neighbors has participated in the effort. This year's tour will also be the first to host solar open houses in every state with a goal of engaging over 50,000 people attending and hosting as part of the Tour.

"Solar brings people together," said Anya Schoolman, Solar United Neighbors Executive Director. "We're excited to partner with ASES to expand the reach of this great opportunity to learn about solar."

ASES is the nation's leading association of renewable energy professionals and advocates. The organization has regional chapters in 41 states and the District of Columbia. It publishes the award-winning Solar Today magazine, and the e-newsletter Solar@Work for renewable energy professionals. ASES also hosts the ASES National Solar Conference, which will take place June 23-26, 2020, in Washington, DC.

SUN helps people go solar, join together, and fight for their energy rights. The organization helps thousands of people go solar every year through bulk purchases known as "solar co-ops" as well as through paid membership programs. Members receive ongoing support for their solar system, discounts to businesses that have solar, and join a community of solar supporters to ensure their investment in solar is protected.