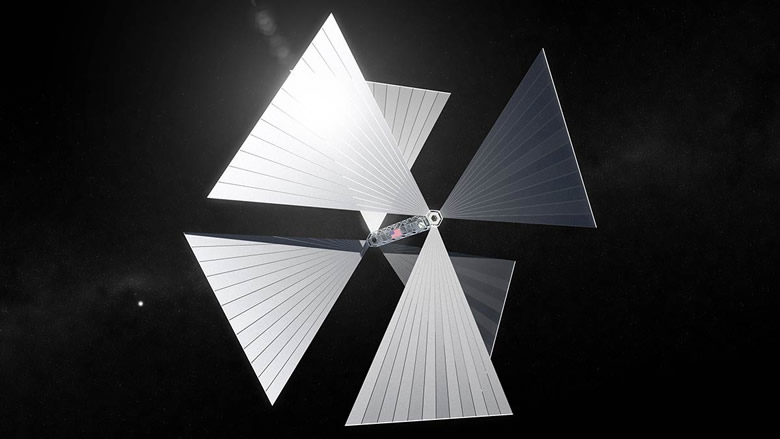 Reaching the focus region where the Sun’s gravity acts like a magnifying lens to the background sky is an immense technological challenge. This region, the SGLF, is over 500 times the distance between Earth and the Sun (547 AU). One Astonomical Unit (AU) is the distance from Earth to the Sun, about 93 million miles (149.5 million km). Even by using our fastest deep space probe, Voyager 1, moving at 11 miles/s (17 km/s) it will take over 150 years to reach just the edge of the SGLF region.

During the previous two NIAC phases nearly every credible propulsion technology was assessed to not only accurately navigate across this vast distance, but also to communicate and operate once at the SGLF -- all within a goal of 25 years from launch. To reach the SGLF on a timescale of 25 years requires a propulsion system capable of accelerating a spacecraft to a speed seven times faster than Voyager 1 (> 20 AU/yr or 100 km/s). The resulting propulsion technology was found to meet both the high speed requirement and the proposed architecture of sending many vehicles to the SGLF. This propulsion does not exploit chemical or nuclear reactions, but simply harnesses sunlight reflecting from a solar sail.

As a key enabler for the SGLF mission, Xplore will design the spacecraft for the SGLF’s Technology Demonstration Mission (TDM). The TDM vehicle as pictured is an advanced solar sail design based upon L’Garde’s SunVane concept. The SunVane concept addresses the control, packaging and scalability challenges of traditional large planar solar sails by breaking up the required overall sail area into smaller rotatable vanes distributed across a lightweight truss. Xplore will transition this concept to a prototype design as a first step toward demonstrating the key technologies necessary to achieve the SGLF mission. The goal for the Xplore TDM vehicle using current technologies is to reach speeds in excess of two to three times that of Voyager 1 (5-8 AU/year). At these unprecedented speeds it would allow the TDM vehicle to reach Jupiter in less than a year and Saturn in two years.

Xplore Founder Lisa Rich said, “Xplore is laying the groundwork to revolutionize the transit speed to destinations in our solar system, and beyond. Once Xplore completes the design, build and first flight of the TDM vehicle, the company would accelerate these missions -- perhaps sending one per year, to rapidly advance solar system exploration while providing fast reaction options for flybys of newly-discovered interstellar objects like Oumuamua and high energy intercepts for planetary defense.”

The TDM will enable rapid transit to dramatically transform and ease the exploration of the outer solar system and Kuiper belt objects. At 5-8 AU per year, the TDM vehicle’s extraordinary speed will allow it to reach Voyager in 20 years. To put these distances into perspective, New Horizons launched in 2006 and thirteen years later performed the first flyby of Ultima Thule, a distant Kuiper Belt object that lies 1 billion miles (1.6 billion km) beyond Pluto.

Alan Stern, planetary scientist, Associate Vice President of the Southwest Research Institute and the Principal Investigator on New Horizons mission to Pluto said, “This is an incredible mission with incredible technology. I am incredibly excited to see it selected for study by NIAC. SGLF offers to revolutionize both exoplanet science and propulsion technology if implemented.”

The design of the TDM spacecraft is led by Xplore Founder and Chief Technology Officer, Dr. Darren Garber, who helped develop L’Garde’s SunVane concept and provided operational support to LightSail. Dr. Garber will coordinate with JPL and Aerospace team members to ensure that the TDM vehicle’s design and future flight will represent the next step toward traversing 500 AU in 25 years or less.

Dr. Louis D. Friedman, Xplore Advisor and Co-Founder of The Planetary Society, worked on numerous flagship missions including Mariner, Voyager, Magellan and the Mars Program. A well-known champion of the Halley’s Comet Rendezvous-Solar Sail project back in the 70s with Dr. Carl Sagan, Dr. Friedman said, “I’m proud that Xplore, led by our colleague Dr. Slava Turyshev, will advance the vision for space exploration Carl Sagan and I put in motion many years ago. The ability to harness the power of the Sun to rapidly transit to distant corners of our universe is a groundbreaking effort that will impact the science community for generations.”

Xplore’s team is comprised entirely of experienced U.S. space professionals who have supported all aspects of the design, development and operations of advanced technology missions for commercial, civil and national security space customers.

For the TDM, Dr. Garber and Xplore’s advanced engineering team will leverage key components, software and system engineering processes employed for its Xcraft™, a high-performance, ESPA-class, multi-mission spacecraft uniquely designed for missions in the inner solar system with a planned lunar radar mapping mission in early 2022. Their expertise will further define the SGLF Phase III study mission and architecture analysis such as using clusters of follow-on TDM vehicles to collectively mitigate risk and lower total system cost. Multiple mass-produced TDM spacecraft offer resiliency and scalability for a future decades-long mission, and the concept could allow other partners to contribute their own set of clustered spacecraft to cooperatively operate during the journey to the solar gravitational lens region in deep space.

Lisa Rich said, “Designing the fastest object ever made in the history of humanity is a challenge worthy of the legacy of Carl Sagan, and we look forward to advancing solar sail technologies with our Advisor, Dr. Lou Friedman. SGLF aligns with Xplore’s long-term vision for frequent, low-cost commercial missions to deep space. The ability to rapidly travel anywhere in the solar system expands our human footprint and will open up new avenues for scientific exploration.”

About Xplore Inc.
Xplore is a Seattle-based company offering Space as a Service™. Xplore provides hosted payloads, communication relay services and exclusive datasets to its customers via the Xcraft™, the company’s multi-mission spacecraft. Xplore’s mission is to expand robotic exploration via commercial missions at and beyond Earth, to the Moon, Mars, Venus, Lagrange points and near-Earth asteroids for national space agencies, national security agencies, sovereign space agencies and universities.