Ultracapacitors prove to be a high-reliability solution for the severe power pulses needed for wind turbine pitch control.

Modern wind turbines are large three-bladed machines that drive variable-speed generators to provide clean electricity. On advanced turbines, the pitch, or angle of attack, of the massive rotor blades can be controlled to optimize the power output, without exceeding the turbine's performance limits. 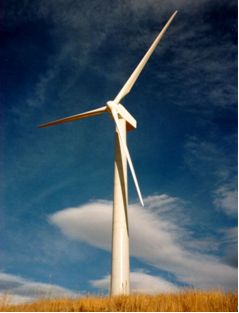 The pitch of the blades is controlled by three independent electro-mechanical actuators. An electronic controller checks the power output several times per second, and when the power output becomes too high, it sends an order to the blade pitch mechanism, which immediately turns the rotor blades slightly out of the wind, protecting the system from excessive stresses. The blades are then turned back into the wind whenever the wind speed drops. This sophisticated control scheme allows the turbine to operate with the greatest aerodynamic efficiency, and reduces excessive loads on the drive train, providing reduced maintenance and longer turbine life.

Newer wind turbine technology can use the wind not only to produce wind energy, but also to enhance the operating safety of the turbine. The controllers in these advanced machines perform aerodynamic braking by individually controlling the pitch of each blade. Applying the full braking effect to the rotor requires pitching all three blades to a 90-degree position the wind. The system has inherent redundancy; even if an individual blade pitch unit fails, the other two rotor blades complete the braking process safely. Each of the autonomous pitch systems is equipped with an emergency power supply to immediately ensure the reliable functioning of the fast blade pitch system in the event of a total power failure. The emergency power supply is also used for maintenance purposes. The pitch system is central to the turbine's safety features, and is highly dependent on an effective energy storage system for both operation and emergency power.

The key to pitch control:

Energy storage Energy storage is the key element in the pitch system's ability to respond quickly under all conditions. The energy storage system must be sized to satisfy the peak power demands of the pitch system, even if those demands occur for only a few seconds. Currently, batteries are the most widely used emergency power supply. However, battery storage systems have significant weaknesses in a high peak power, short duration application, giving pitch system engineers some major design challenges. Batteries have poor low temperature performance and a very limited operating life under extreme conditions. Batteries require repeated replacement throughout the life of the wind power plant and are not designed to satisfy the most important requirements of pitch system power source: delivering frequent short bursts of power within seconds for rotor blade adjustments over many hundreds of thousands of cycles. 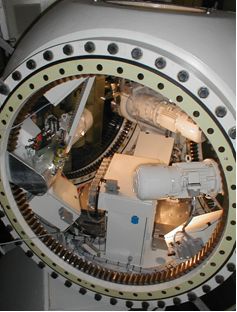 To illustrate, a pitch system is shown in some detail. The pitch system is located in the rotating central hub of the wind turbine. The power supply and control signals for the pitch systems are transferred by a slip ring from the non-rotating part of the nacelle, or stationary enclosed pivot behind the hub. The slip ring is connected to a central control unit, which includes clamps for distributing power, and control signals for the three individual blade drive units. Each blade drive unit consists of a switched mode power supply, a field bus, the motor converter, an emergency system and the ultracapacitor pack. 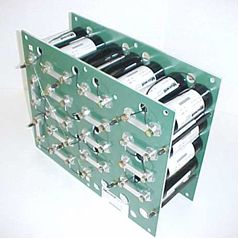 When the power supply is switched on, the ultracapacitor module is charged to the power supply's nominal voltage, typically within 1 minute. The capacitor pack has enough energy to run the system for over 30 seconds at nominal power without recharging. The ultracapacitor pack is directly connected to the DC link of the motor converter, which drives a three-phase, four-pole asynchronous motor mounted directly to the gearbox of the blade pitch drive. The nature of blade pitch control dictates that the motor be designed for maximum torque at very low rotational speeds, and that each blade be equipped with blade position sensors for control feedback. 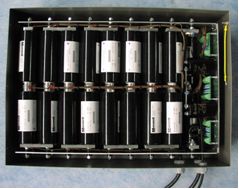 Megawatt-class turbines dominate the world market; the average installed capacity per turbine now exceeds 1 MW. Several wind power plant manufacturers are in development of multi-megawatt turbines, driven by demand from the offshore market. The largest turbines are able to produce up to 5 MW, and rotor diameters up to 110 m (360 ft.) are now in production. The fast blade pitch systems on these large installations require larger emergency power packs to ensure continued safe operation.

Ultracapacitors are particularly suited for remote and offshore wind power applications because of their high reliability, their efficiency and their long operating life. Ultracapacitors are fundamentally maintenance-free devices, requiring no service or expensive management systems. Batteries, on the other hand, require ongoing measurement of their state of health (SOH) and state of charge (SOC) to avoid costly repairs or unsafe operating conditions. Reliable and maintenance-free operation is a must for offshore applications because the power plants are several kilometers away from the coast, and frequent inspections are not possible. Inclement weather conditions in remote installations means the inspection and service cycle may extend to several months.

Today there are more than 60,000 wind turbines operating worldwide, representing 32 gigawatts of installed capacity. Of these, offshore installations account for 3% of the world market. By 2007, offshore wind power generation is expected to account for 14% of the world's new wind capacity. Though wind energy contributes less than 0.05% of the total world electricity supply today, by 2012, wind's growing contribution is estimated to reach 2%. Within a decade, an additional 145 GW of new capacity is expected to be installed, representing a $150 billion market potential. The implication is that a staggering number of new turbines will be added to networks in the next ten years, representing a huge potential for advanced three-bladed variable speed turbines featuring individual pitch control, aerodynamic braking, and emergency safety systems. These &quot;future" turbines are being designed with ultracapacitors today, because ultracapacitors provide a simple, solid state, cost effective, reliable, long-life solution necessary to ensure the safe operation of these advanced fast blade pitch systems.

Adrian Schneuwly is employed at Maxwell Technologies SA, Rossens, Switzerland, a developer of power electronic components and computing systems for customers in multiple industries. He can be reached at (41) 26-411 8550. www.maxwell.com.