Key trends and growth opportunities up to 2015.

02/19/10, 08:34 AM | Solar & Wind | Fuel Cells
GBI Research’s report, “The Global Fuel Cells Market: Key Trends and Growth Opportunities up to 2015”, gives an in-depth analysis of Global fuel cells market and provides growth opportunities up to 2015. The research analyzes the growth and evolution of the Global fuel cells market up to 2008 and gives historical statistics for 2001-2008. This research analyzes the market scenarios for this technology and regulatory policies that govern them. This coupled with elaborate country profiles of key market give a comprehensive understanding of the market scenario. The report is built using data and information sourced from proprietary databases, primary and secondary research, and in house analysis by GBI Research’s team of industry experts.

Fuel Cells Market is in its Nascent Stage of Development
Despite the various advantages of the technology, the fuel cell market is yet to be a part of the mainstream market mainly due to its high cost and lower durability in comparison to grid power. Since the market is in its development phase the fuel cell industry has large number of manufacturers. This is primarily because most of the technological developments are taking place in universities or government laboratories which further spin out as new business units and seek private equity and venture funding from established corporations.

Integration of Nanotechnology Will Enhance Fuel Cells Market Potential
Nanotechnology is providing increased durability to fuel cells and is making its costs competitive with traditional sources of power generation. In 2008, more than 2,100 organizations engaged in the development of nanotechnology for fuel cells and hydrogen energy, spent more than $4.7 billion on this research. Fuel cell technology development coupled with integration of nanotechnology will provide the fuel cell market with greater reliability, durability, and power, at a lower cost along with the advantages of lower emissions and fuel saving.

Price of Fuel Cell Installations is Expected to Go Down in the Future
The price of fuel cells is expected to decrease in the near future as production increases in response to the government support in terms of subsidies and coordinated R&amp;D, coupled with technological development in making fuel cell manufacturing more profitable. The mass production of fuel cell vehicles is not expected to gather momentum before 2015 although many producers will manufacture about 100 vehicles per year for fleet demonstration. This delay in mass production of fuel cells is mainly due to the lack of appropriate infrastructure to support the development. Though various countries are taking steps towards the development of hydrogen fueling stations inadequate infrastructure will push further commercialization of fuel cell market till 2015. Even with this hurdle the fuel cell installations costs will come down because of the technological developments and government support mechanisms.

Environmental Concerns Are Driving the Fuel Cells Market
Fuel cells are an emission free power sources used for vehicles, potable devices, and residential, commercial, and industrial purposes. Lead-acid batteries, traditionally used for energy storage contain toxic waste such as lead, which need to be effectively disposed of at the end of the life of a system. The growing need to curb toxic wastes therefore drives interest into alternate energy solutions such as fuel cells due to their emission-free nature. The rising energy demand boosts the need for clean sources of power generation which in turn gives way to fast paced development of the fuel cells market.

Lack of Infrastructure is Hampering Market Development
The global market for power supply systems does not have the adequate infrastructure required to transport, distribute, and store fuel cell systems and the fuels used in them. As a result, the fuel cells market is unable to cater effectively to the growth in demand for systems. Fuel cell vehicle manufacturers also anticipate infrastructure as the primary bottleneck in the development of technology. Hydrogen fuelling stations are slow to develop and are also expensive which adds to the challenges for the technology.

Investments Are Pooling in for Fuel Cell Development
Global fuel cell industry is attracting a large pool of investments primarily due to the huge demand potential the industry possesses. Since the fuel cell technology is being promoted by the governments across the globe in form of subsidies, financial incentives, and tax benefits, more and more investors are putting in money in the sector. During 2002 to 2009 the fuel cells market has attracted the investment of more than $663m in the form of equity financing, private placement, private equity, venture financing, and so on. Investments peaked in 2004 when the industry received investments of about $170.3m which resulted in an increased number of installations coming online in 2005. The investments decline during 2008 and 2009 as a result of economic crisis but it is expected that the fuel cells market will attract more investors once the economy recovers. 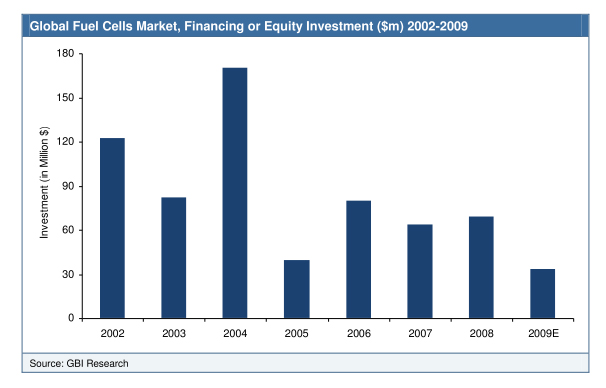 The US Fuel Cell Market is Growing Rapidly, While Korea is the Key Emerging Market for Fuel Cell Technology
The US fuel cell market is growing at a rapid pace with the total number of fuel cells installed by the end of 2009 standing at 620 units. The main driver of this growth is the government support that the industry received as a part of the US government’s effort to promote the development of clean sources of energy generation. Programs such as the Energy Policy Act of 2005, Investment Tax Credit, and various state-level fuel cell market transformation projects will further drive the US fuel cell market. The Korean fuel cell market is in a nascent stage and is expected to witness rapid growth in the near future as a result of government supported policies. Korea has about nine fuel cell units installed in various regions. The major driver behind the future development of the hydrogen and fuel cell industry in Korea is the country’s need to achieve energy security.

GBI Research is a leading business information company providing global business information reports and services. Our highly qualified team of Analysts, Researchers, and Solution Consultants use proprietary data sources and various tools and techniques to gather, analyze and represent the latest and the most reliable information essential for businesses to sustain a competitive edge.