Anne Norris | EcoCAR: The NeXt Challenge 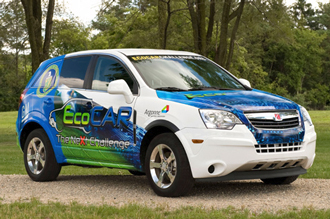 
Students will design and build advanced propulsion solutions that are based on categories from the California Air Resources Board (CARB) zero emissions vehicle (ZEV) regulations. Students are encouraged to explore a variety of solutions including electric, hybrid, plug-in hybrid and fuel cells. In addition, they will incorporate lightweight materials, improve aerodynamics and utilize alternative fuels such as ethanol, hydrogen and biodiesel.

Using a real-world engineering process modeled after GM’s Global Vehicle Development Process (GVDP), teams will integrate their advanced technology solutions into a vehicle donated by GM. The GVDP is the modeling simulation process currently used to develop all GM vehicles. This real-world approach gives students valuable hands-on experience in engineering practices and resource allocation. The EcoCAR competition is unique for its focus on modeling and simulation, as well as subsystem development and testing, rather than just hardware modifications.

EcoCAR: The NeXt Challenge was established by the United States Department of Energy (DOE) and General Motors (GM) and is being managed by Argonne National Laboratory. More information is available at www.ecocarchallenge.org and on the competition blog at www.green-garage.org.

The 16 university teams participating in the EcoCAR competition are:

Year One
In the first year of EcoCAR, student teams received $10,000 in seed money to begin developing their vehicle designs. Year One was an essential foundation for establishing a successful vehicle by emphasizing the use of math-based design tools—like Argonne’s Powertrain Systems Analysis Toolkit (PSAT) or similar vehicle models—and the development of software-in-the-loop (SIL) and hardware-in-the-loop (HIL) simulation techniques.

The 16 EcoCARdesigns are as follows:

While each of the 16 EcoCARdesigns is unique, there are common attributes including:

By broadening the technical focus of the competition to include more aspects of the entire vehicle development process, the university teams had a greater opportunity to expand their learning and refine their vehicle solutions. Ohio State University placed first in Year One of the competition and the University of Victoria and Mississippi State took home second and third place honors. All teams successfully completed the first year of EcoCAR and earned a vehicle key and the opportunity to compete in the second phase of the program.

Years Two and Three
During the second and third years of the competition, students build the physical vehicle and continue to refine, test, and improve vehicle operation. After receiving their physical vehicle, each team begins building the core components of their cars, as parts come in. A few months prior to the Year Two Finals, teams face critical Safety & Inspection Testing, which takes place on their respective campus. After passing early inspections, the re-engineered student vehicle prototypes will compete in a week-long Finals competition of engineering tests. These tests are similar to the tests GM conducts to determine a prototype’s readiness for production and the Year Two testing will take place at GM’s Desert Proving Grounds in Yuma, Arizona, a facility used for commercial vehicles. The Greenhouse gas, Regulated Emissions, and Energy in Transportation (GREET) model, developed at Argonne National Laboratory, will be used to assess a well-to-wheel analysis of the greenhouse gas impacts of the technology each team selects.

During the week-long competition, student teams will demonstrate the vehicles so when compared to stock production vehicles they meet or exceed the following goals:

After the successful completion of Year Two, students will spend Year Three refining and improving their vehicles and will face a similar cycle of tests and competitions throughout the year. In Spring 2011, the Year Three winning team and overall EcoCAR competition winner will be announced.

The U.S. Department of Energy and General Motors are the headline sponsors for the EcoCAR competition. General Motors will provide production vehicles, vehicle components, seed money, technical mentoring and operational support. The U.S. Department of Energy and its research and development facility, Argonne National Laboratory, will provide competition management, team evaluation and technical and logistical support.

By sponsoring advanced vehicle engineering competitions like EcoCAR, GM, the Department of Energy and other industry sponsors are helping to develop the next generation of scientists and engineers. EcoCARfollows the previous successful student engineering competition, “Challenge X: Crossover to Sustainable Mobility,” also sponsored by GM and the U.S. Department of Energy.