The greenest apartment building ever constructed officially opened to its residents on August 1, 2010.  Located in downtown New Haven, Connecticut, 360 State Street elevates green living from a guilt-trip to recycle and compost to an attractive and hassle-free lifestyle.  360 State Street has even been awarded Connecticut’s first LEED-ND Platinum certification.  The building offers all of the fashionable green finishes, including high-efficiency lighting systems, low-VOC paints, and EnergyStar appliances, but one of the most important elements of the project is hidden within the infrastructure of the building - a 400 kilowatt fuel cell from UTC Power.

This fuel cell is the largest installation in a residential application, and it is expected to provide all of the thermal power needed for the entire, 500-apartment building in addition to its main function as an electric power source.  The on-site generation allows for the excess heat to be utilized fully, increasing the building’s efficiency and lowering its impact on the environment, and residents will be attracted by the thoughtful design and implementation of the building alone. 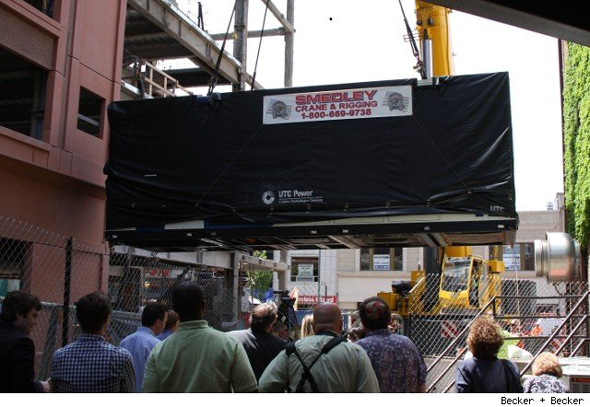 This innovative project has been brought to life by Becker+Becker, a combined architecture and development firm based in Fairfield, Connecticut.  Becker+Becker has a large portfolio of historic renovations, community buildings, and green building projects, and 360 State Street continues in this tradition.  The company has also built another multifamily apartment building with plans for a fuel cell installation: the Octagon on Roosevelt Island, New York.  Bruce Becker, president of Becker+Becker, expressed his optimism for the fuel cells, stating that “fuel cells will be an increasingly important technology for the multifamily housing industry, as building owners, investors and tenants realize the economic and environmental benefits they offer.” 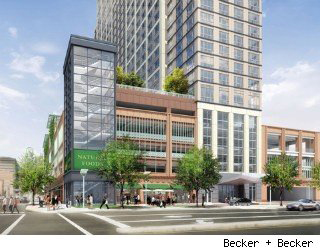 The building itself is a 32-story tower with an attached, 500-car capacity parking garage, retail space on the first floor, a rooftop terrace complete with a heated swimming pool, a fitness center and countless other amenities.  In addition to all of its green features, it will also encourage residents to embrace a smaller carbon footprint by walking due to its central location in the heart of New Haven and proximity to public transportation.  The 500 apartments are beautifully modern and feature open floor plans with large windows for natural light.  Residents will even be able to track their individual energy consumption online. Additionally, there are several units that have been set aside for affordable housing.

New Haven might not seem like the most obvious city for a green project of this magnitude, but the state of Connecticut is proving to be a hotbed of environmentally conscious activity.  The Nutmeg State is home to fuel cell manufacturers FuelCell Energy, Proton Energy Systems and UTC Power, the developer of the fuel cell in 360 State Street.  The School of Forestry and Environmental Studies at Yale University also boasts Kroon Hall, a new classroom and lecture space that is expected to receive LEED Platinum certification due to its innovative rainwater collection system and natural lighting design.  Yale University has had a fuel cell installed since 2003 at its Environmental Science Center near its Peabody Museum, just one of several installations around the state.

Despite the advantages of fuel cells for multifamily residences, there have been some obstacles to 360 State Street’s cutting-edge concept.  Submetering, a system in which the electricity consumption of individual apartments is metered in addition to the building as a whole, is only allowed at recreational facilities, such as campsites and marinas, in the state of Connecticut.  The metering issue is further complicated by the state’s regulations for net metering, which allows property owners with on-site generation to sell excess power back to the grid.  The combination of hundreds of tenants and on-site generation has caused a regulatory roadblock due to these metering problems.   “Submetering and net metering remain significant challenges in some states, and federal legislation is clearly needed to remove this obstacle,” said Becker.

The 360 State Street apartments are sure to become the model for large-scale green residences in America.  Reducing one’s impact on the environment no longer entails some drastic change in lifestyle; reductions in energy consumption can be achieved by simply changing your address.  Hopefully, buildings like 360 State Street will become more and more common in the coming years.