As I sit here literally 150 yards from the Oval office in our Washington, D.C. offices, I can't help but wonder if you are as frustrated as I am about the American economy.

I have dedicated almost every moment of my life over the last four years to assist green technology companies in becoming successful. I have spent on average 250 days each year traveling to 47 of our great 50 states. I have met with small town mayors,congressional leaders and International leaders in 65 countries promoting green technology.

I have seen technologies here in America that with the right support could literally change the World. Brilliant ideas that if just backed by our Federal government would put millions of Americans back to work.

Technologies that can make water from the humidity in the air that alone can solve the water shortages in Florida. But yet the CEO of that company is having trouble keeping his cell phone on let alone put unemployed Americans back to work manufacturing his product.

I have seen a product that could literally remediate the tar balls on Gulf Coast beaches, while also taking manure from the livestock industry and turn it into a brick that can be burned in any coal fire burning facility at the same BTU's as coal but yet BP, the Federal government and the energy sector won't give this amazing scientist the right time of day, let alone subsidize his company.

A product that makes an organic fertilizer from worm waste that should be integrated into every landscape design in America that can save millions of tons of harmful emissions from going into the atmosphere but yet this husband and wife team can't find the capitalization they need to manufacture their product.

A reusable garment bag that can be used in every dry cleaning store in America to save millions of tons of plastic from going to landfills that has to be manufactured in China because this amazing woman can't receive money from our government to manufacture it right here in the good old USA. Here's an idea. Mandate that every military dress uniform that's given to a soldier upon graduation of basic training come in one of these bags and subsidize this company to put America back to work!

A company that plants trees that can grow 65 feet in five years, be cut down and a new tree grows on the same stump every four years thereafter that can supply a whole new lumber industry here in the United States while reducing carbon emissions. But yet they are struggling to plant their first forest here in America!

A fuel catalyst technology that if subsidized by our federal government and regulated as an emission control system can reduce millions of tons of carbon from our atmosphere while creating better ozone for our children but yet this inventor can't seem to get the attention of the car manufacturers and the farming industry so that he can help them add fuel efficiency and save money at the same time.

A retired Army Ranger that created a roof application process for commercial roofing that if applied could save up to 40% of the energy usage of that building. A product that if applied to every one of the 80 million commercial, retail and institutional buildings in America can create enough solar reflect ability that we could recapture 60% of the lost polar ice caps that have melted in the last 10 years.

We gave the car manufacturers $100 billion dollars and last year SUV sales were up 6% and Hyrbrids were down 2% and gasoline is rising to the point that by summer it will be $4.00 per gallon again! When will were learn our lesson about fossil fuels?

Why was America so successful over the last 60 plus years?

Because we built things Mr. President. Because America realized that we could manufacture anything! During World War 2 we made a war machine that freed the World from oppression.

Returning American soldiers from World War 2 came home to jobs. Jobs in manufacturing. Jobs in building new homes and businesses. We built an economic superpower by our ability to make things that the World wanted.

As soon as we stopped building. The American economy collapsed. We sent our manufacturing jobs to China and our service based jobs to India. All we were left with was pushing empty paper on Wall St. and we are reaping the economy that we sowed.

Mr. President, green technologies like the ones I have described in this letter have the ability of recapturing American manufacturing prowess while restoring our economy at the same time.

Here is an idea Mr. President, if the next round of stimulus money were given to every American household and business in the form of a prepaid Visa card where all that family or business could use that card for was to make their homes or businesses more energy efficient or weatherized, then that would immediately put millions of Americans back to work and give the green technology sector the shot in the arm it so desperately needs!

You want to see America lead in the next new battery technology then give MIT $25 billion to perfect Hydrogen Fuel Cell technology and watch the World look to America to manufacture the only storage technology capable of capturing the power of the sun!

Have the federal government subsidize carbon vacuuming, cloud breaking, wave to energy technology, hydro kinetic technology, algae based bio fuel research and atmospheric water generating technolgies and I gaurantee you that America will make things again, millions of Americans will get back to work and the America economy will be vibrant again.

Thomas Jefferson once said that every generation needs a revolution. I ask you Mr. President to help America take advantage of the great green revolution! 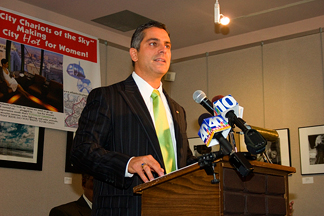 I am still committed every day to my mission and will until my last breath. I am committed to make this Earth a better place because our organization existed.

Are you going to help me Mr. President? Are you still committed to make America great again?

Walk across the street and lets talk about it.

Congratulations on your new appointment! I hope that in your new position you will be a better advocate for the green technology industry than your predecessor.

Haven't we spent enough time on the healthcare issue yet? Why do we need to repeal a bill that only helps a handful of Americans and literally no one who is unemployed? And by the way, will cost the American taxpayers another $230 billion to repeal.

Instead let's take that money and create the United States Green Energy Investment Bank and disperse the money to those green tech companies that can create the most new "green collar" jobs as soon as they can.
How about we put that $230 billion dollars in to a fund that will help unemployed Americans to be able to save their homes from foreclosure due to the practices of predatory lenders instead of putting more and more American families in the street!

$230 billion dollars can go a long way. For instance, it's estimated that $19 billion can be spent to resurface every major road in urban centers in America with a new "white" asphalt that can reflect the sun and reduce heat in inner cities throughout America where temperatures are estimated by scientists to raise by 5 degrees over the next 25 years and cause many deaths due to the black outs caused during peak load demand times.

What about taking some of that money and create utility scale atmospheric water generator facilities powered by solar energy in Florida where an estimated 1000 baby boomers are retiring every day and where access to fresh water in the future will become a National Security issue?

How about we take that money and digitize the American Power Grid? Put an estimated 2 million Americans back to work doing that!

How about we take that money and we partner on what our organization committed to in October of 2008 when we presented the idea to Congress to build the National Green Energy Institute, the first College and University dedicated to only sustainable curricula? A place where the brightest minds in America create a Manhattan Project for energy security.

Why can't we just stop the partisan fighting and put political attention on making America great again?
You have incredible power Speaker Boehner!

Winston Churchill said "there comes a special moment in everyone's life. A moment for which that person was born when he seizes it! It is his finest hour" Let this moment be your finest hour and prove to the American people and the World that America can be great again!