We've cobbled together some great factoids from the Apricus website to create this overview of Solar Thermal systems. Why are we not using this technology on every home that is exposed to the sun?

Water heating and space heating accounts for more than 60% of the average households utility bill.  Installing a solar water heating system can offset 60-80% of your annual water heating energy costs and reduce your carbon footprint.

The Apricus evacuated tube solar collector utilizes energy from the sun to provide hot water and space heating for homes and businesses. 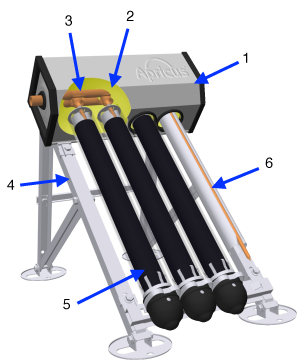 Step 1: Sunlight is absorbed inside the evacuated tube causing it to heat up.

Step 2: The heat pipe inside the tube carries this thermal energy up to the manifold box.

Step 3: Fluid circulates from the storage tank up through to the header pipe and extracts the energy from the hot heat pipe tips.

Step 4: The newly heated fluid circulates back to the storage tank where it can be used and the cycle begins again.


What is an Evacuated Tube?

Evacuated tubes absorb solar energy and convert it into heat for use in water heating.  There are several types of evacuated tubes used in solar thermal collectors. Apricus collectors use the most common "twin-glass tube". This type of tube is chosen for its reliability, performance and cost effectiveness.

Each evacuated tube consists of two glass tubes made from extremely strong borosilicate glass. The outer tube is transparent and allows sunlight to pass through with minimal reflection. The inner tube is coated with an aluminum nitride (Al-N/Al) coating.  This selective surface is excellent at absorbing solar radiation with minimal reflection losses.  During the manufacturing process, the air contained in the space between the two layers of glass is pumped out, while the top of the tubes are exposed to high temperatures.  This fuses the two tubes together into a single evacuated tube.  This "evacuation" of the gasses forms a vacuum, which is the most important factor in achieving the high performance of the evacuated tubes.
Why a vacuum? As you would know if you have used a glass lined thermos flask, a vacuum is an excellent insulator. The vacuum eliminates a physical connection between the two glass layers of the tube which means there is nothing to transfer thermal energy so the heat cannot escape! This is important because once the evacuated tube absorbs the radiation from the sun and converts it to heat, we don't want to lose it!!  The vacuum helps to achieve this. The insulation properties are so good that while the inside of the tube may be 150oC / 304oF , the outer tube remains within a few degrees of the ambient air temperature. This means that evacuated tube water heaters can perform well even in cold weather, when flat plate collectors perform poorly in these conditions due to heat loss.
In order to maintain the vacuum between the two glass layers, a barium getter is used (the same as in television tubes). During manufacture of the evacuated tube this getter is exposed to high temperatures causing the bottom of the evacuated tube to be coated with a layer of pure barium. Called a "getter", this barium layer actively absorbs any CO, CO2, N2, O2, H2O and H2 out-gassed from the evacuated tube during it's lifetime and increases the longevity of the vacuum.  This barium layer also provides a clear visual indication of the vacuum status; the silver-colored barium layer turns white if the vacuum is lost making it easy to identify.
Individual evacuated tubes are inserted into a manifold of either 10, 20 or 30 tubes in order to form a complete collector.  When oriented toward True South, a passive tracking effect is achieved in the collector due to the round absorption surface, meaning the collector is absorbing the sun's radiant energy throughout the day and not just when the sun is directly overhead.  In an East West orientation, a similar effect is achieved as the sun rises and falls across the sky over the course of the year.
The efficiency of an evacuated water heater is strongly related to the intensity of the solar radiation (known as "insolation") in your location.  To learn more about insolation and the average values in North America click here.

What is a Heat Pipe?

Heat pipes might seem like a new concept, but you are probably using them everyday and don't even know it. Laptop computers often using small heat pipes to conduct heat away from the CPU, and air-conditioning system commonly use heat pipes for heat conduction.

The principle behind heat pipe's operation is actually very simple.

The heat pipe is hollow with the space inside evacuated, much the same as the solar tube. In this case insulation is not the goal, but rather to alter the state of the liquid inside. Inside the heat pipe is a small quantity of purified water and some special additives. At sea level water boils at 100oC (212oF), but if you climb to the top of a mountain the boiling temperature will be less than 100oC (212oF). This is due to the difference in air pressure.

Based on this principle of water boiling at a lower temperature with decreased air pressure, by evacuating the heat pipe, we can achieve the same result. The heat pipes used in AP solar collectors have a boiling point of only 30oC (86oF). So when the heat pipe is heated above 30oC (86oF) the water vaporizes. This vapor rapidly rises to the top of the heat pipe transferring heat. As the heat is lost at the condenser (top), the vapor condenses to form a liquid (water) and returns to the bottom of the heat pipe to once again repeat the process.

This explanation makes heat pipes sound very simple. A hollow copper pipe with a little bit of water inside, and the air sucked out! Correct, but in order to achieve this result more than 20 manufacturing procedures are required and with strict quality control.

Material quality and cleaning is extremely important to the creation of a good quality heat pipe. If there are any impurities inside the heat pipe it will effect the performance. The purity of the copper itself must also be very high, containing only trace amounts of oxygen and other elements. If the copper contains too much oxygen or other elements, they will leach out into the vacuum forming a pocket of air in the top of the heat pipe. This has the effect of moving the heat pipe's hottest point (of the heat condenser end) downward away from the condenser. This is obviously detrimental to performance, hence the need to use only very high purity copper.

The heat pipe used in Apricus solar collectors comprises two copper components, the shaft and the condenser. Prior to evacuation, the condenser is brazed to the shaft. Note that the condenser has a much larger diameter than the shaft, this is to provide a large surface area over which heat transfer to the header can occur. The copper used is oxygen free copper, thus ensuring excellent life span and performance.

Each heat pipe is tested for heat transfer performance and exposed to 250oC (482oF) temperatures prior to being approved for use. For this reason the copper heat pipes are relatively soft. Heat pipes that are very stiff have not been exposed to such stringent quality testing, and may form an air pocket in the top over time, thus greatly reducing heat transfer performance.

Even though the heat pipe is a vacuum and the boiling point has been reduced to only 25-30oC (86oF), the freezing point is still the same as water at sea level, 0oC (32oF). Because the heat pipe is located within the evacuated glass tube, brief overnight temperatures as low as -20oC (14oF) will not cause the heat pipe to freeze. Plain water heat pipes will be damaged by repeated freezing. The water used in Apricus heat pipes still freezes in cold conditions, but it freezes in a controlled way that does not cause swelling of the copper pipe.

The efficiency of a solar collector is constantly changing throughout the day, factors such as ambient temperature, fluid temperature, insolation levels play a role in dictating how well a collector converts the sun’s energy into usable heat. Most certifications publish information that will allow you to determine a collectors performance.

The three performance variables for the Apricus solar collector as provided by the Solar Rating & Certification Corporation (SRCC Certificate #2007033A) are as follows (for imperial calculations):

As well as the three performance variables show above, insolation level (G) in Btu/ft2, ambient temperatures (Ta) and average manifold temperature (Tm) must be known.  These values give the value X, also known as the fluid parameter, used in the formula below.

(other slightly different forms of this formula are used, but provide the same result)

How to use the formula:

Based on the ambient temperature, average manifold temperature and insolation level, first calculate the value for X.

Now enter all the values into the formula:

The solar conversion efficiency for that specific point in time and set of environmental conditions is 57.1% based on aperture area. That is: 57.1% of the energy provided by the sun is actually used to heat the water.

Below is a first order graph showing the performance curves for the Apricus solar collector based on the inlet fluid parameter.

Most domestic water heating applications occur in the range of 0.2-0.4 with higher temperature applications happening further to the right on the graph.

In reality ambient temperature will fluctuate, and the manifold temperature will gradually increase as the water is heated. Furthermore insolation levels may fluctuate with intermittent cloud cover. In order to more accurately calculate energy output per day/month/year a more complete set of environmental data must be considered and many (hourly) performance calculations throughout the day taken. Your local Apricus distributor can provide estimates of average monthly and annual performance, heat output and thus solar contribution for your location.

One factor which is not considered in the straight performance calculations outlined above, is the affect of transversal or longitudinal IAM values (Incidence Angle Modifier). Considering IAM is important, as for Apricus solar collectors it accounts for as much as an additional 25% in total daily heat output values.