Solar cogeneration of electricity and hot water maximizes the economic and environmental value of energy derived from the sun. Cogenra's system produces as much electricity as photovoltaic (PV) technology allows, then captures most of the remaining energy as hot water, in total exploiting over 70% of the energy incident from the sun.

A White Paper by | Cogenra

Solar cogeneration of electricity and hot water maximizes the economic and environmental value of energy derived from the sun. Cogenra’s system produces as much electricity as photovoltaic (PV) technology allows, then captures most of the remaining energy as hot water, in total exploiting over 70% of the energy incident from the sun. A single concentrating solar collector module serves both functions, making the technology more cost effective than PV or solar hot water (SHW) alone or PV and SHW installed as separate systems. The dual purpose design also magnifies the environmental benefits, since it offsets more fossil fuel consumption per square foot of installed system. 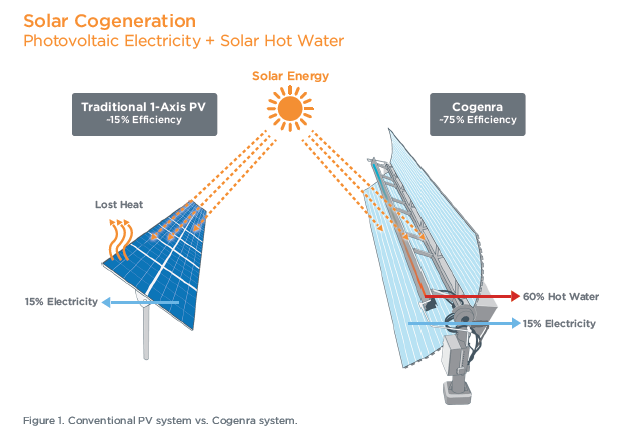 Ordinary photovoltaic (PV) systems, in contrast, convert only 15-20% of the sun’s energy into usable alternating current (A/C) electricity — and dissipate the rest of the energy into the air as waste heat. In many cases, the owner of the PV system is also burning natural gas to heat water on the same site, and thus missing the opportunity to exploit the waste solar heat to reduce gas consumption, which would not only lower utility bills but also offset the GHG emissions from burning natural gas.

Ordinary solar hot water (SHW) systems forego the opportunity to generate electricity, which is almost always more valuable in financial terms than the same amount of energy delivered as heat. Averaged across all current sources of generation (including nuclear and renewables), electricity also incurs more GHG emissions than heat generation on an energy equivalent basis, so solar cogen offsets more GHG emissions than SHW even if the total energy outputs are the same.

The GHG reductions of a solar cogen system continue to accrue every year the system remains in service. Over the 25 year nominal life of a Cogenra system, the accumulated equivalent reductions are substantial.

Once installed, Cogenra’s equipment emits no GHGs while operating and producing energy. The comprehensive life cycle analysis, however, accounts for the “upstream emissions” associated with producing and delivering the raw materials, then manufacturing and installing the solar array. These upstream emissions are essentially amortized over the life of the array. The results of the analysis are expressed in terms of electricity output, but the calculations factor in and properly allocate the upstream emissions to both electricity and hot water outputs. 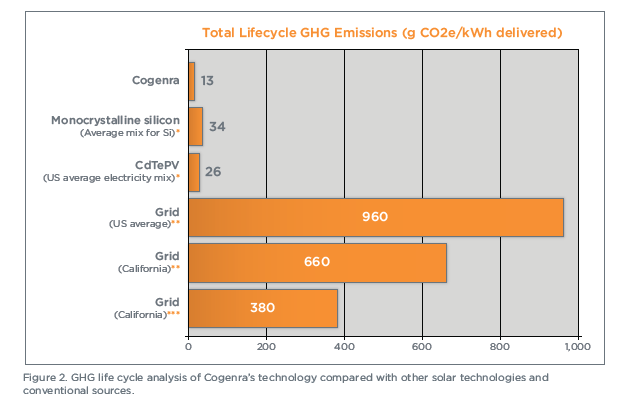 The foregoing comparison does not yet truly capture the advantage in environmental impact that Cogenra’s technology provides relative to conventional solar options, because it only describes GHG offsets per unit of energy produced. To complete the picture, it is necessary to factor in the amount and type of energy produced for systems covering an equivalent area. Cogenra’s system delivers far more renewable energy in total than a PV system covering an equivalent area. Delivering more renewable energy offsets commensurately more GHG emissions. This fundamental thermodynamic advantage explains why Cogenra’s relative environmental benefits compared with competing solar technologies are so immense: 2.6X vs. PV and at least 1.3X (and often much higher) vs. SHW. This is a sustainable advantage that is largely independent of the details of the calculations.

Solar Cogen vs. PV: Compared with a single-axis tracked PV system with the same type of solar cells and the same collection area, Cogenra’s system produces approximately 5X the total renewable energy — the same amount of electricity and in addition 4X that much energy as hot water. Taking into account the relative carbon intensities of generating electricity and heating water, the overall advantage works out to 2.6X. That is, a Cogenra system occupying one acre achieves the same GHG offset as a tracked PV system that occupies 2.6 acres.

Solar Cogen vs. SHW: A fair comparison between solar cogen and solar hot water is more difficult because SHW systems are usually much simpler and do not track the sun. A SHW system that tracks the sun could in theory produce about the same total energy as a Cogenra system of the same size. The Cogenra system would nonetheless offset at least 1.3X more GHG emissions because generating electricity by conventional means incurs a higher carbon intensity than heating water. In practice, SHW systems do not usually track the sun, so they produce less energy and Cogenra’s advantage will thus be higher than 1.3X. How much higher depends on the details of the system configuration. 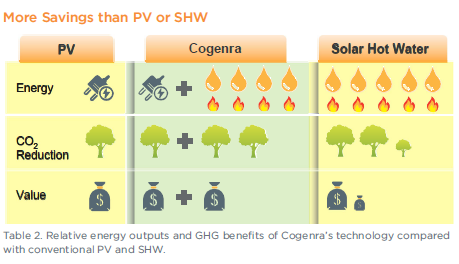 3- The GHG and energy payback ratios differ because electricity and heat have different carbon intensities.

**  Indirect emission reduction factors from Reference 4, including emissions avoided from generation at the margin (from fossil-fuel sources) and indirect transmission and distribution losses.