We still need a lot more research into different biofuels to see which source will be low cost and environmentally safe. Using a weed, pond scum, municipal waste and manure are future possibilities of biofuels that help, rather than damage our food sources and the environment. 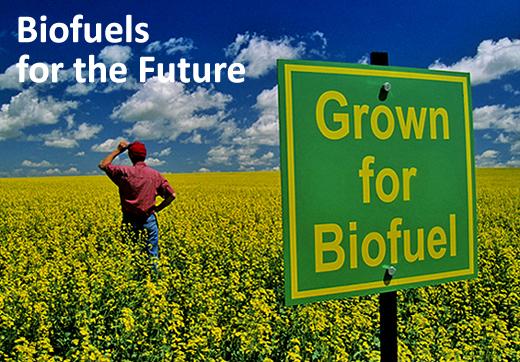 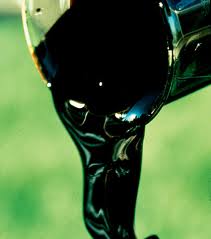 All though we would like to find alternatives to oil production, the future of biofuels is uncertain because of concerns about environmental tradeoffs, such as modern agriculture methods, which will have a significant impact because of the reliance on fossil fuels, fertilizers and agriculture chemicals.   In particular, the changes in the nitrogen cycle suggest the need to examine the trade-off associated with increased bioproduction.

Biofuels are seeing competition from unconventional fossil fuel alternatives, such as heavy oil and tar sand, which are essentially forms of petroleum, and the refining process is fairly uncomplicated.  Methane can be extracted from deposits of shale gas, tight gas, and coal bed methane, which are the unconventional natural gas resources.  Peat is another unconventional alternative, which is one of the more abundant fossil fuel resources, found in tropical and temperate zone locations as well as in arctic and sub-arctic regions.

Also, the amount of land needed to produce biofuels is important, as we need to produce more biofuels from less land mass.  Corn in the U.S. produces 400 gallons per acre while sugarcane in Brazil generates 660 gallons per acre.  Cellulosic ethanol could raise per acre ethanol yields to more than 1,000 gallons.  Cellulosic ethanol is made by breaking down the tough cellular material that gives plants rigidity and structure and converting the resulting sugar into ethanol. Cellulose is the world’s most widely available biological material, present in such low-value materials as wood chips and wood waste, fast-growing grasses, crop residues, and municipal waste.

The airlines are looking to power their planes with a blend of traditional fuel and biofuels from fuel processed from organic waste or non-food materials, such as algae or wood chips, which will comprise as much as 50 percent of the total fuel burned to power passenger flights.  Test flights show that algae fuel gets better mileage than petroleum-based jet fuel.  There is a 4 percent increase in energy density in the fuels because of the lower-burning temperatures in the engine itself, which results in greater fuel mileage.

At some point, the need for biofuels will displace crops needed for human food, such as corn, soy and sugar.  Therefore, it would make better sense to look to other sources for biofuels, such as camelina, which is well suited to marginal soils, and resource-conserving agronomic practices, algae and manure. 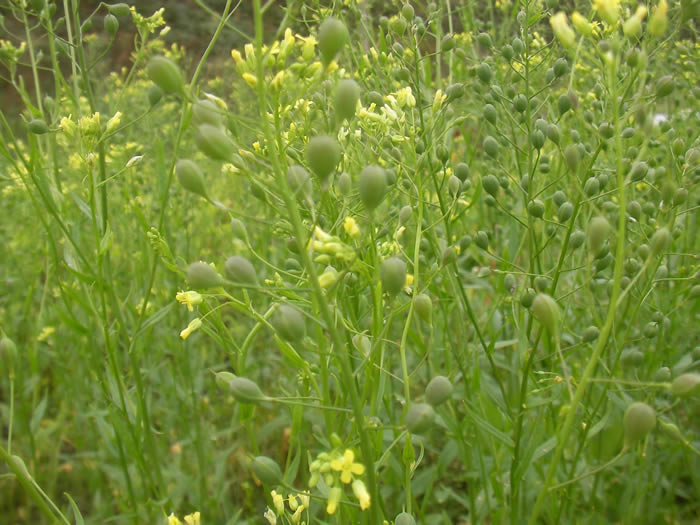 In North America, camelina is considered a weed; therefore, growing this plant will not interfere with the crops used for food.  Camelina oil has been used as industrial oil.  Camelina is a short-season, cool climate adapted crop that matures in 85–100 days.  It germinates at low temperature, and seedlings are very frost tolerant. No seedling damage has been seen at temperatures as low as 12° F.  The plant performs well under drought stress conditions and may be better suited to low rainfall regions than most other oilseed crops.

Camelina requires less fertilizer and pesticides; plus many insects to do not feed on the plant.  The plant can be grown in rotation with wheat, helping to increase wheat yields by 15%, and the oil is good for humans as it is high in omega-3 fatty acids and antioxidants and can be used as food for livestock, which then becomes human food.  This will go a long way in reducing the question swirling around food crops as biofuels.  In addition, a crop produces up to 100 gallons of camelina oil per acre.

Algae are another source, which holds promise as a clean and carbon-free fuel for the future.  One reason this approach hasn't yet been harnessed for fuel production is that under ordinary circumstances, hydrogen production takes a back seat to the production of compounds that the organisms use to support their own growth.

Many kinds of algae and cyanobacteria, common water-dwelling microorganisms, are capable of using energy from sunlight to split water molecules and release hydrogen, but the algae are really not interested in producing hydrogen, they want to produce sugar, which they need for their own survival, and hydrogen is just a byproduct.  If a multitasking enzyme is introduced into the liquid where the algae are at work, it will both suppress the sugar production and redirect the organisms' energies into hydrogen production.

Adding a bioengineered enzyme increases the rate of algae hydrogen production by about 400 percent, suppressing the sugar production but not eliminating sugar, because if the sugar went to zero, it would kill the organism.  Ultimately, such a system could be used to produce hydrogen on a large scale using water and sunlight. The hydrogen could be used directly to generate electricity in a fuel cell or to power a vehicle, or could be combined with carbon dioxide to make methane or other fuels in a renewable, carbon-neutral way 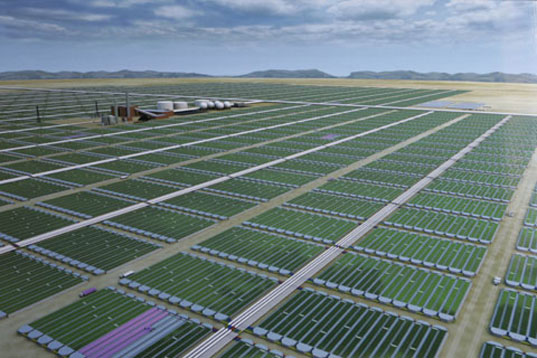 Environmentalists say those nutrients spur the growth of algae, which reduce oxygen in the water and create dead zones for crabs, oysters and other marine animals.  The "dead zone," also called a hypoxic zone, is caused by the growth of massive quantities of algae known as algal blooms. As algae die, bacteria feed on them and in the process, they suck up the water's available oxygen. Oxygen levels become depleted to the point that the area cannot support marine life, and sea creatures must swim to other waters or die.

Unlike other biofuel crops, algae are extremely efficient at converting carbon dioxide into biomass, and they do not require much land.   Growing algae around wastewater treatment plants or facilities that emit carbon dioxide could help increase the economic viability of algae. 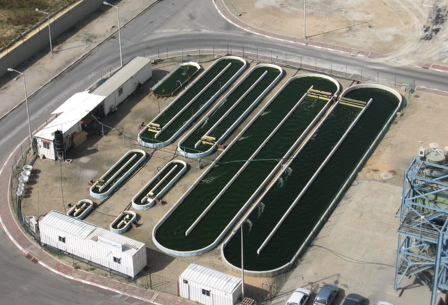 A 50-acre algae pond could create 100 gallons of oil a day and offer diesel fuel for around $2 a gallon to the public.  Byproducts of the algae production could also be packaged into pet food in order to cut down on waste.

Algae-based fuel producers use sunlight, water and carbon dioxide to convert carbon dioxide into sugar, which the algae metabolize into lipids, or oil. The industry says it can do so using non-potable water and without converting more forests into farm fields, thus overcoming criticisms of corn and soy biofuels.  Whoever thought that pond scum would be a viable fuel?

There is a great potential for harvesting biofuels from municipal waste streams. Raw municipal sewage has a substantial amount of lipids that can contribute to the production of biodiesel. Presently, biodiesel is largely produced from vegetable or seed oils, and the cost of agricultural products accounts for roughly 80% of the production costs.  In contrast, municipal waste is something we currently pay to get rid of.

Lipids (fatty organic compounds that are not soluble in water) are actually extractable at two different stages of the process. The primary sludge is about 15% lipid and cholesterol by dry weight and this can be harvested directly. The treatment process allows bacteria to break down many of the organic compounds present in the primary sludge, converting some of them into the lipids that comprise the bacterial cell membranes. About seven percent of this secondary sludge can be harvested as lipids.

Establishing biofuel harvesting equipment in half the nation's sewage plants could produce about 1.8 billion gallons of biodiesel, which is about 3% of the nation's current fuel use.  The cost would be about $3.11 per gallon, which has the potential to be very competitive with fossil-derived diesel.

Dairy farmers and high tech companies like HP are focused on a biofuels resource: animal manure.  Manure can be run through the same sort of bioreactor that runs on agriculture waste, where anaerobic bacteria digest its contents and release methane in the process. That methane can then power fuel cells or traditional natural gas generators. Although natural gas prices have been dropping of late, many high tech companies have set goals for renewable energy use, making biogas an appealing option. 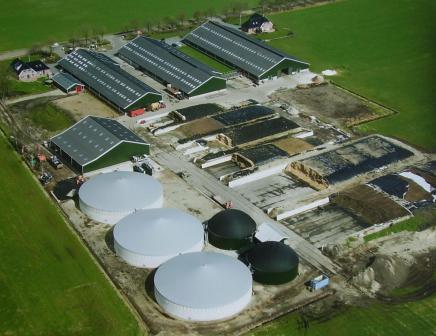 A byproduct of the manure-burning process will be an ash so refined that it could be certified as a food grade substance, meaning it could be used as an animal feed supplement.  At full capacity, the facility will process more than 250 tons of animal manure daily and generate between 2 ½ and 3 ½    megawatts of energy, or enough to power about 2,500 homes.

We still need a lot more research into different biofuels to see which source will be low cost and environmentally safe.  Using a weed, pond scum, municipal waste and manure are future possibilities of biofuels that help, rather than damage our food sources and the environment.