Hydrogen is the lightest element and its monatomic form is the most abundant chemical substance, constituting roughly 75% of the Universe's sub-atomic mass. At standard temperature and pressure, hydrogen is a colorless, odorless, tasteless, non-toxic, nonmetallic, highly combustible gaseous state as molecules composed of two atoms. Hydrogen gas is highly flammable and will burn in air at a very wide range of concentrations between 4% and 75% by volume, thereby making it a perfect energy source. 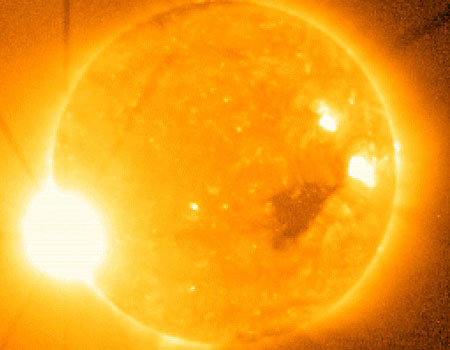 Using hydrogen as a fuel source is a fairly new technology, which has not fully matured. Hydrogen is a clean burning fuel that is advantageous to the environment because it does not emit greenhouse gases. Therefore, hydrogen diminishes the harmful effects to the environment by replacing fossil fuels.

Since fossil fuels emit greenhouse gases, specifically carbon dioxide and nitrogen oxides, hydrogen is the fuel of the future. The biggest problem with hydrogen fuel is storage and the problem that a lot of energy is needed to produce hydrogen fuel. Research is in the developmental stages as to how to more efficiently extract hydrogen.

Hydrogen is a renewable resource that can be generated from both water as waste, and solar energy.  The water and the sun are basically inexhaustible energy sources that can be used to make hydrogen.

The challenge is the cost to manufacture hydrogen fuel, which presently is very costly. The high cost is due to the problem of storage and a carrier. We can conclude that future research should be aimed at how to store hydrogen as a fuel source.

One approach for renewable energy storage is to use solar energy to drive the rearrangement of water into molecular hydrogen gas and oxygen gas, often called water splitting. Sunlight is virtually limitless. Therefore, we must find a way to store this energy when the sun is not shining. For this to work, we must find an efficient method to store solar energy. Using electricity produced by photovoltaic systems potentially offers the cleanest way to produce hydrogen. Again, water is broken down into hydrogen and oxygen by electrolysis, but the electrical energy is obtained by artificial photosynthesis.

A new catalyst consisting of cobalt metal, phosphate and an electrode placed in water produces oxygen from water, combined with another catalyst, such as platinum, will produce hydrogen gas from the water. This method duplicates the water splitting reaction that occurs during photosynthesis. 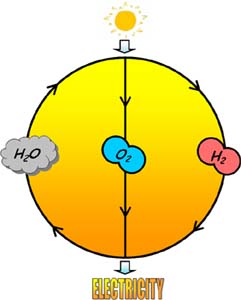 Specifically, what scientists seek to do is use the energy from the sun to rearrange low energy bonds to form high energy bonds, which will deliver energy back to us later when we need it, similar to a rechargeable battery. When the hydrogen is delivered back(or burned), it releases water instead of carbon-based molecules, which can be collected and split again to remake the fuel and sustain the cycle.

Much emphasis is being placed on using hydrogen fuel for motor vehicles, but these vehicles do not yet have the range between fill-ups as gasoline powered vehicles.  Hydrogen vehicles average 300 miles. Technology is improving, but the vehicle hydrogen storage systems do not yet meet size, weight, and cost goals for successful utilization. 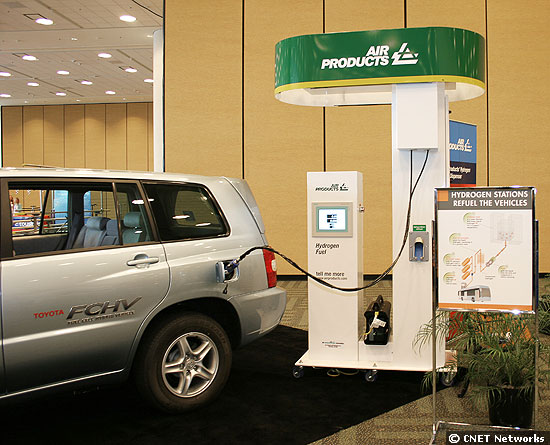 Before hydrogen vehicles can become a standard, there needs to be more than the 9,500 existing refill stations nationwide.

Hydrogen could be utilized to power cars in two known methods. It could either be used as a fuel cell or as a direct fuel. When hydrogen is used as a fuel cell, it works in the same way that a battery works with a chemical reaction, which generates electricity. The direct combustion method is similar to gasoline engines, except for a few minor changes to the internal combustion engine. However they are powered, hydrogen cars may still be another decade away before we see them in quantity.

All though fuel cells for cars are much more efficient than internal combustion engines, and produce no harmful emissions, current Hydrogen fuel cells suffer from a low power-to-weight ratio.  Even electric cars are typically 3 to 4 times as efficient as hydrogen powered vehicles, indicating that a lot more research will have to go into hydrogen fuel cells in cars.

Another challenge is the distance that a hydrogen vehicle can travel on a single tank.  SunHydro is trying to change all of that as they are making plans to create a hydrogen highway that will enable cars on the East Coast to travel from Maine to Florida via I-95, by developing eleven solar refueling stations. At $3 million a station, this is a real challenge. 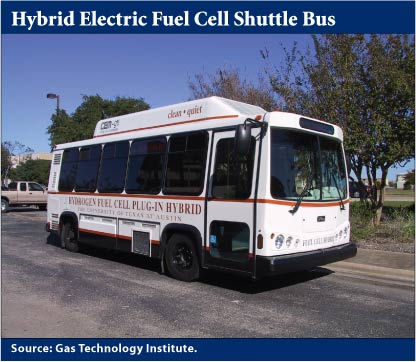 An existing practical use for hydrogen is to power buses. It is used to power commercial buses both by internal combustion engines burning a combination of hydrogen and other fuels and solely by hydrogen used in fuel cells.

For the last 40 years, NASA has used liquid hydrogen to propel rockets, and hydrogen fuel cells to power the shuttle’s electrical systems, which at the same time produced pure drinking water. A fuel cell combines hydrogen and oxygen to produce electricity, heat, and water. Fuel cells are a promising technology for use as a source of heat and electricity for buildings.

In addition to electricity, fuel cells produce heat, which can be used for heating, including hot water and space heating. Using this heat and power, fuel cells can power buildings with an efficiency rating as high as 90%, which saves money, energy, and reduces greenhouse gas emissions. These fuel cells are being used to power hotels, hospitals and office buildings in 19 countries.

The time spent re-charging and maintaining lead-acid batteries in forklifts reduces productivity. A company, Air Products, has a hydrogen alternative. The company provides the hydrogen supply and fueling infrastructure for fuel cell power packs, which are direct replacements for the industrial batteries used in forklifts, automated guided vehicles (AGVs) and other material handling vehicles.

Avimech International Aircraft developed a hydrogen-driven personal helicopter, weighing just 230 pounds with a payload of 800 pounds and air time of 90 minutes. Driven by two small yet powerful motors, this helicopter can travel 115 MPH. Hydrogen peroxide (H2O2) and a catalyst combine to power this innovative flying machine. 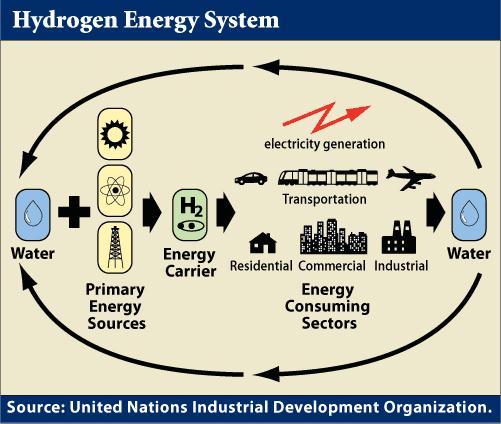 Intermittent renewable energy sources such as windmills and solar panels are limited for commercial use because the wind doesn’t always blow, nor the sun shine, making hydrogen a critical link as a storage medium to supply power during these periods.

Regenerative or reversible fuel cells produce electricity from hydrogen and oxygen, but can be reversed and powered with electricity to produce hydrogen and oxygen. This technology could provide for storage of excess energy produced by intermittent renewable energy sources, releasing this energy during times of low power production.

Some types of fuel cells can be operated on pure hydrogen. In the event that fuel cells become price-competitive with internal combustion engines and turbines, large gas-fired power plants could adopt this technology.

Combined with electricity, hydrogen could be an essential energy carrier, which moves and delivers energy in a usable form to consumers.  The sun and wind can’t produce energy all of the time, but they could produce electric energy and hydrogen, which can be stored. Hydrogen can also be transported to locations where it is needed, just like electricity.

In many ways, hydrogen is the perfect fuel. It’s abundant, efficient and produces no emissions when used in a fuel cell. It can be produced from renewable resources and is not a greenhouse gas. Because hydrogen power is environmentally friendly and non-toxic to use, industry should accelerate research so that this renewable resource may be used in the near future.

Len contributes articles to several technology eMagazines, and has written a DIY wedding photography book, which is being published in 2013. He also writes a Op-Ed column for a local newspaper.

The Q.Home+ ESS HYB-G1 energy storage solution offers scalable storage capacity from 4.5 kWh up to 18.9 kWh and comes in a modular design for easy and fast installation. The system is offered in both DC-coupled and AC-coupled configurations and can connect up to 3 batteries in series using only one inverter and battery management system (BMS). The system includes an integrated backup power function for 100% of the rated inverter output to support critical loads in the event of power failure and offers remote monitoring using the QHOME+ web portal or QHOME+ ESS mobile app.
More Products
Feature Your Product