Currently, Owl Power Company has 22 Vegawatt devices installed and operating at restaurants, most located in the Northeast, with one in California and two in the United Kingdom.

James Peret, President & CEO of Owl Power Company, located in Boylston, MA, developed VegawattTM , an on-site energy-savings device that uses waste vegetable oil from restaurants to generate electricity and hot water for those very same restaurants. Depending on its configuration, a Vegawatt device can process from 30 gallons of waste vegetable oil per week up to as many as 120 gallons per week.

Rather than disposing of waste vegetable oil in a dumpster behind the restaurant, workers simply deposit the used oil into the Vegawatt device. The Vegawatt system, about the size of a two-door refrigerator, contains both a turn-key waste vegetable oil refinery and power-generation equipment - everything needed to transform the oil into electricity and offset the restaurant’s energy costs. And the radiator associated with the generator engine produces heat that’s used to provide the restaurant with hot water, to offset water heating costs as well. The French-fry bits and other food particles contained in the oil that’s deposited into the system are filtered out at the end of the day for disposal in a standard solid waste receptacle. 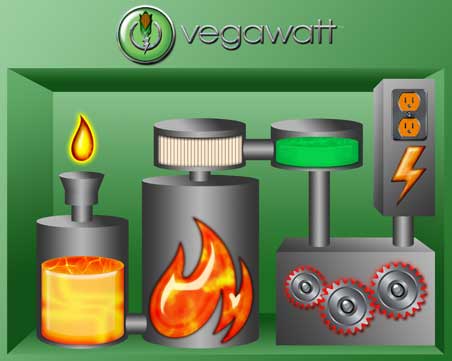 Peret notes that his cogeneration Vegawatt system has “extremely high efficiency” in that it captures about 90% of the energy contained in the vegetable oil. He also clarifies that his company does not make biodiesel, a process that requires adding chemicals to vegetable oil and creates waste products.  Instead, he opted for the alternative approach of modifying the engine mechanically so the oil functions as an energy source “just in the form of vegetable oil,” rather than modifying the oil so that it works in the engine, as is the case with biodiesel.  The result is a much cheaper and more efficient way to generate power from vegetable oil. And because the Vegawatt is attached to the restaurant, there’s always a hot water loop, and the diesel engine, “which loves to get turned on, be supplied an infinite amount of fuel, and then run forever,” is able to do just that.

Currently, Owl Power Company has 22 Vegawatt devices installed and operating at restaurants, most located in the Northeast, with one in California and two in the United Kingdom. Each restaurant has a maintenance & service agreement with the company, and Peret has found that those agreements can be implemented more efficiently and effectively with the use of a HOBO U30 web-based monitoring system from Onset Computer Corporation. 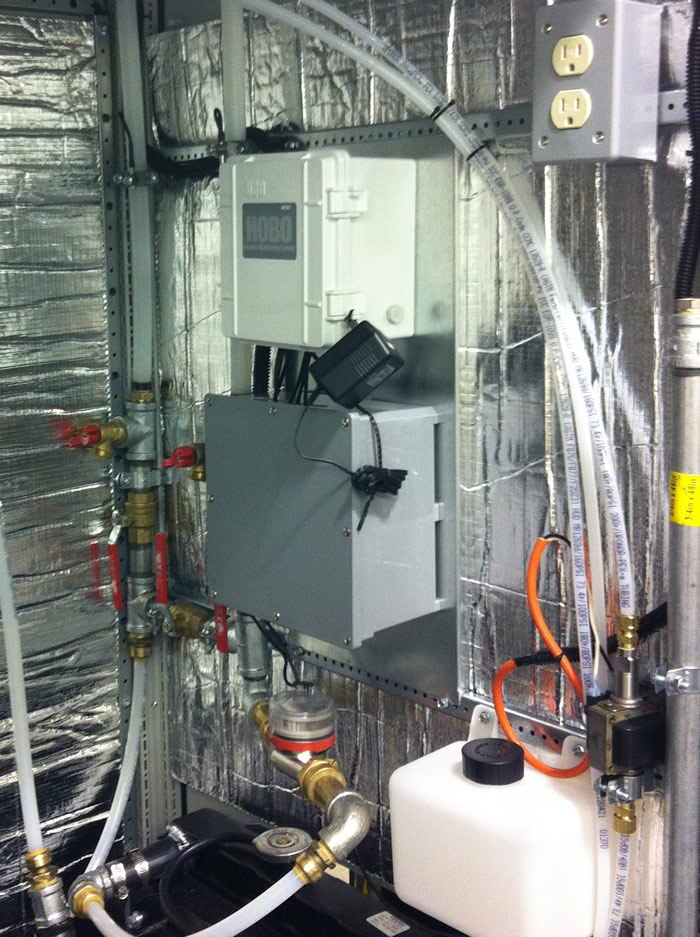 an internal view of the Vegawatt system showing the Onset system and with a view of some oil, coolant and electrical system.  Also in the view are two temperature sensors and the coolant flow meter

Previously, when a Vegawatt customer would call to say that the device had mysteriously shut down, a team would be sent out to diagnose the problem, try to reconstruct what had caused it in the first place, and fix it. Given the difficulty of reconstructing events, Peret was looking for “a data recording solution that would allow us just to capture what was going on and basically be able to not have to reconstruct or diagnose things, but actually see it there in the data.” The web-based HOBO U30 not only provides the needed data, but also makes them available from the Internet in real time, making it, as Peret notes, “more than just data recording; it’s data reporting.”

The HOBO U30 systems that Peret has in place measure about 10 parameters, including various temperatures and pressures, the flow rate of hot water going through the system, and the amount of electricity being provided. They track every five minutes and report every hour. Now, rather than wait for the customer to call, the company can literally look at the data stream and decide if a technician needs to be dispatched to perform whatever service might be necessary. In fact Peret reports that recently, in response to some parameters that were causing a bit of concern, a technician was dispatched to adjust a Vegawatt device that hadn’t yet even shown any signs of problems but was still “chugging along very happily” as far as the restaurant owner was concerned.

Weekly and monthly coldpoint coolant measurements, you can really get to understand the operational schedule of the people that use the Vegawatt system

In addition to enhancing the quality and efficiency of customer service that Vegawatt owners receive, including the scheduling of routine maintenance, data from the HOBO U30s are also used to determine the number of BTUs being produced by the device.  And this information is used in a calculation to let the customers know the dollars per gallon of oil that they’re receiving in terms of electricity and hot water costs. Peret has found that the used fryer oil can be worth as much as $4.00 per gallon, allowing owners of Vegawatt systems to reduce their energy expenditures by 25% or more.

The Onset monitoring configuration for the Vegawatt system consists of three task groups of sensors: User Benefits, Periodic Maintenance, and Urgent Events.  The User Benefit sensors include a WattNode to measure kWh out, and two temperature probes teamed with a water flow meter that report thermal benefits to the facility.  The Periodic Maintenance sensors report filter pressures and trigger a filter change service when backpressure exceeds a specific level.  The Urgent Events sensors, mainly temperature sensors, report specific temperature points around the system.  These sensors are critical in determining the root cause of a downtime event.

Peret tells a story of an occasion when after returning a system to full power following a routine oil-change, the team went inside the restaurant for lunch.  While in the restaurant, Peret reviewed the HOBOlink Web interface and noticed that two of the sensors indicated boiling water. He and his team immediately leapt to action and ran to the system, where they found a coolant line had ruptured. Rather than circulating hot water, the system was producing steam. Peret credits Onset and the HOBOlink Web-interface with saving that power plant.

The Onset configuration is so precise that Peret and the rest of the Vegawatt team have gotten to know their customers’ operating schedules quite well.  “One system we have in Maine, a bakery, I can tell you that the owner opens the kitchen at 5:00 every morning, the restaurant closes at 10:00 and everyone washes dishes until 11:00.  I can tell you all of this because we have a record of their hot water heater temperature.  Look at the daily peaks and you can see this schedule for yourself.”

With an average return on investment of only two to four years without incentives, Vegawatts not only save money for their owners by reducing electricity and hot water costs, but also enrich the experience and appreciation of restaurant-goers who often seek out establishments that are acting in a green and responsible manner.  And, as Peret notes, the environmental benefits of using a Vegawatt are many, including that the electricity produced doesn’t have to travel through the grid, which loses 10% or more of the energy that it transmits. In addition, the vegetable oil, which is a biofuel, “was corn last year, this year it’s energy, and next year it can be corn again,” without adding any CO2 to the atmosphere. Plus, a Vegawatt produces energy from waste vegetable oil, which is no longer an appropriate food product and otherwise would just be thrown away, degrading into the same amount of CO2 that would be produced by letting the oil naturally degrade. The most significant environmental gain is the reduction in heavy trucking that typically transports waste oil around for processing; this reduces diesel fuel consumption as well as reducing wear-and-tear on the local roadways.

To date, Owl Power Company has installed web-based HOBO U30 data logging systems in eight of its Vegawatts. And to help maintain optimal performance of all currently operating and future Vegawatt systems sold, the company is moving forward with its plan to make the HOBO U30 system a standard item in every one of its devices. As the person ultimately responsible for maintaining the Vegawatts, Peret describes the HOBO U30 as “an incredibly neat toy” with the “awesome ability to see what’s going on in systems that are hundreds of miles away.”  The more efficiently the Vegawatts operate, the fewer shutdowns that occur, the better it is for the restaurant owners’ wallets, their customers, and the environment.