Thin Layers With A Big Impact

10/15/13, 09:46 AM | Solar & Wind | Fuel Cells
In the world of alternative energy, there is a seemingly never-ending quest for lower and cleaner emissions. Constantly evolving, fuel cell technology is not only an eco-friendly energy source, but also delivers high output efficiencies. These devices are electrochemical in nature, meaning that they convert fuel directly into electricity. Solid oxide fuel cells (SOFC) are an emerging, high-growth technology that delivers the highest electrical efficiency of around 50 percent. However, the success of SOFCs largely depends upon coating technologies that prevent cell degradation and extend the useful service life. Plasma spray coating technology, particularly cascading arc plasma, offers a cost-effective and highly dense solution.

Plasma spray is a proven materials processing technique for producing protective and surface-enhancement coatings using a plasma jet. When first introduced in the early 1960s, plasma spray was celebrated as an innovative method of applying coatings of ceramic and other high-temperature melting materials. Hailed for its ability to use a wide range of feedstock materials with higher melting temperatures, such as alloys and ceramics, the plasma spray gun gained rapid success for critical coating applications in the power generation, commercial aviation, military and other industries.
Today, plasma spray is considered one of the most versatile thermal coating processes available, producing high-performance coatings with superior durability and reliability – and it has been improved upon. The plasma spray process uses a combination of heat and velocity to create a coating from fine, powdered material feedstock. An arc forms between the anode and cathode, where the gas flows and becomes ionized (stripped of electrons). This creates a plasma plume into which powdered spray material is injected, melted and accelerated toward the substrate surface.
Plasma spray has further evolved into cascading arc plasma. With its enhanced efficiency, cascading arc plasma saves costs when applying coating materials to gas turbine and airframe components, engine and drive train components, hydroelectric and steam turbine components, and paper manufacturing rolls, to name but a few. Compared to traditional plasma spray, cascading arc plasma’s reliability allows for tighter control of coating process windows, important for critical components and long spray runs. In particular, this technology benefits the alternative energy industry, making parts last longer and function more efficiently.

The difference between traditional and cascading arc plasma

Because of arc instabilities, conventional plasma spray guns are prone to producing varying temperatures within the plasma jet. However, cascading arc plasma guns are able to provide a uniform heating platform with steady temperatures. The cascade fixes the electric arc length, which provides it with a starting path over a series of electrically neutral rings within the arc chamber.

Once the gun is ignited, only the common front anode, or nozzle, is electrically connected to the power supply. The fixed arc length has the advantage of stabilizing the plasma plume and eliminating the extreme amplitude power oscillations (in the 3 to 5 kilohertz range) that result from an unstable arc.
As a result, cascading arc plasma generates homogenous ionization, creating a consistent coating for a part. An everyday example is the simplicity and consistency of baking bread in a well-controlled oven, where a faulty oven with fluctuating temperatures would produce variable outcomes. Traditional plasma’s inconsistent coating also limits the amount of material that can be injected into the flame in a given period of time. As a result, cascading arc plasma  has a higher efficiency than traditional plasma coatings with improvements generally measuring between 60- and 400-percent.

The uniform heating platform leads to higher coating throughput and productivity, or higher volumes of coating material applied per unit of time. Cascading arc plasma’s consistent stream of gas heats a greater percentage of powder compared to traditional plasma, and this allows the powder to be injected at a higher rate. With more material landing on the part, manufacturers achieve an overall reduction in material costs and processing time.
The amplitude and frequency of the oscillation is directly linked to the heating and flight path of each powder particle. As a result, the stable plume produced by cascading arc plasma guns significantly increases deposit efficiency and the consistent quality of the coating. In addition, this also creates a highly reproducible coating process, making it easier for the technician to achieve uniform results.
The process window for cascading arc plasma guns remains comparatively stable over a longer period of time, enabling extended spray runs and reduced maintenance. Due to higher process drift, which is an indication that gun parts need to be replaced, conventional plasma guns last fifteen to twenty hours before needing maintenance. However, the stable arc in cascading arc plasma guns causes less damage within the gun, allows the parts to last longer, and creates a genuine, repeatable production process. For example, Sulzer Metco’s TriplexProTM cascading arc plasma gun often lasts for 200 hours before needing maintenance. Ultimately, the increased productivity depends upon the materials being sprayed.
Cascading arc plasma guns have a greater material feedstock utilization, which reduces the time and cost associated with spraying a part. Just ten years ago, a customer may have needed several different guns to accommodate the wide range of applications. Now, a single cascading arc plasma gun, such as the TriplexProTM, can cover all applications except for internal spray processes.
Also available are single-cathode guns, such as Sulzer Metco’s SinplexPro TM, that can be integrated into most existing plasma spray systems. The difference is that while the TriplexProTM functions like a stove top that heats over a broad area, the SinplexProTM is more like a Bunsen burner, with one localized heat spot. 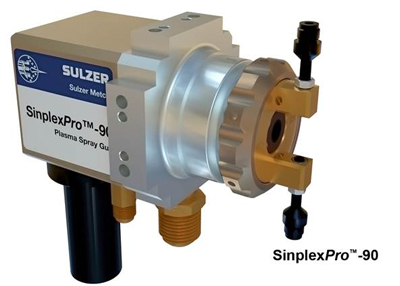 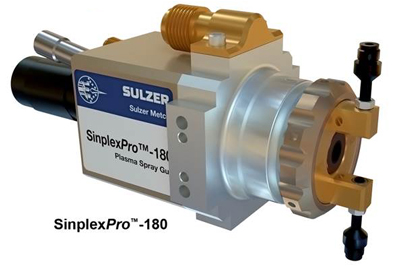 SOFCs are used for applications such as distributed power generation, combined heat and power (CHP), and auxiliary power units (APU) in the transportation market. Because they operate at extreme temperatures between 600 and 1,000 °C (1,112 and 1,832 °F), plasma spraying the functional layers can significantly improve performance and increase efficiency.  Cascading arc plasma provides a highly-dense coating for functional layers, which in combination with metal solder, have the potential to significantly improve the thermal cycling behavior of a stack compared to traditional coating solutions using glass solder. 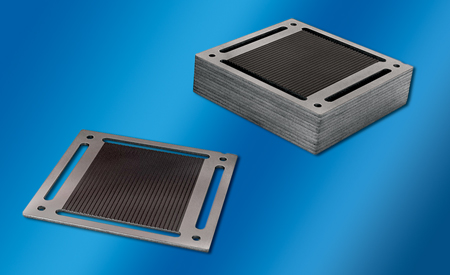 SOFC interconnects coated with the TriplexPro™-210 plasma spray gun.
When coating these cells, an extremely consistent layer is needed for the fuel cell to operate properly and at the highest efficiency. The electrolyte of SOFCs must be highly dense and as thin as possible to attain a highly efficient and powerful cell. A dense layer of ceramic material prevents chromium evaporation and cell degradation, which extends the useful service life of the fuel cell. 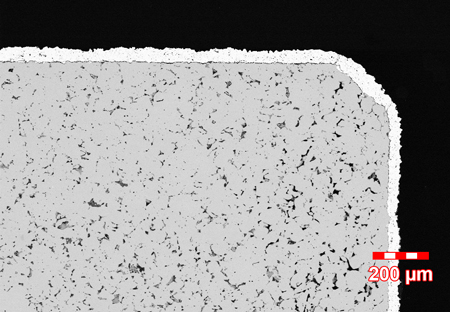 State-of-the-art LSM coating, applied on an interconnect made out of P/M CrFeY, using the TriplexPro™-210.

Like most new technologies, cascading arc guns have progressed since first debuting on the market, with current versions functioning far more optimally than the first. A common lingering false perception is that cascading arc plasma guns are overly complex because they are composed of more elements. In reality, the guns have evolved for simplified maintenance and only need to be addressed once every 200 hours. For example, Sulzer Metco designs its TriplexProTM guns for quick and simple customer maintenance. In addition, similar to other plasma guns, cascading arc plasma guns require only one power supply.  Additionally, cascading arc plasma technology now has the flexibility to run on hydrogen gas, giving manufacturers a distinct advantage as the global helium supply becomes limited.

As plasma spray technology continues to evolve, its applicability will broaden. Above all, there is no substitute for industry experience combined with thorough application know-how. To achieve the highest success, it is critical that users work with material and equipment suppliers that are knowledgeable about cascading arc plasma technologies to ensure a durable part that can be coated efficiently and cost-effectively.

About Sulzer Metco
Sulzer Metco is a leading surface solutions provider with a global presence. We are focused on supporting our customers with specialized components and innovative surface engineering products and services, using advanced coating and surface enhancement technologies.