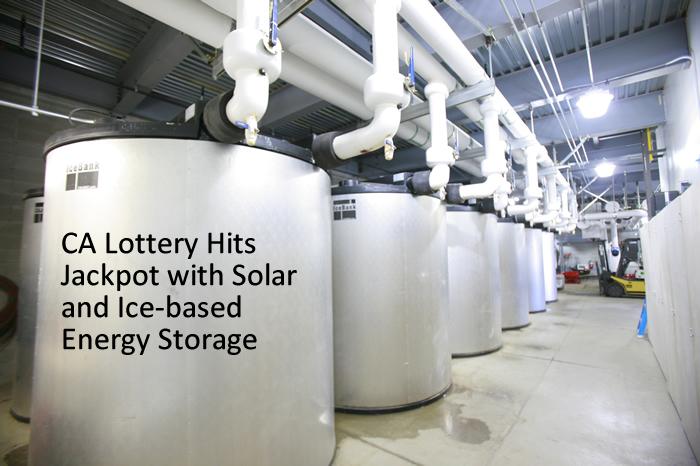 California Lottery, home to California’s POWERBALL, MEGA Millions, SuperLotto Plus and Fantasy 5, broke ground in February of 2010 on their new headquarters. By July of 2011, the new home for lottery operations was ready for occupancy. The headquarters consists of a 155,000 square-foot, 6-story main structure and a 400-seat net zero energy pavilion, which is used for staff meetings, training classes and lottery commission meetings. The $61 million facility incorporates multiple sustainable features, including ice-based thermal energy storage, green roofs, daylight harvesting, a photovoltaic system, window glazing and automated window coverings, all of which reduce operating costs, improve energy efficiency and reduce the structure’s carbon footprint.

California Lottery was previously occupying a building that was inefficient and expensive to operate and sought to construct new headquarters that would be both functional and save on energy costs. A major feature of the new design included the construction of a net zero energy pavilion. For the pavilion to achieve net zero classification, it had to be designed to operate using no more energy than is provided by its own on-site generation. Of course, this would need to be accomplished without compromising occupant comfort.

“For this building, the state’s focus was to make it energy efficient, while being fiscally responsible,” said Mike Stanton, Interface Engineering. “Besides helping meet targets for modeling energy efficiencies that beat CA Title 24, we also wanted to create a net zero pavilion that could supply renewable energy to the rest of the building.”

With project price being a top priority, it was important to integrate technologies that could provide a steady return on investment. Project leaders decided to use solar panels in the design of the pavilion and ice-based energy storage throughout the entire facility. These features would reduce operating costs once the project was complete and create a quicker payback period on the project.

CALMAC’s IceBank® energy storage tanks were installed to provide the main structure as well as the pavilion, with nearly 2,000 tons-hours of cooling capacity. California Lottery’s two 200-ton chillers create and store ice at night, using energy from the utility, when demand is low and energy prices are discounted. The ice is then melted the next day to cool occupants during peak demand hours, when energy prices are significantly higher. The pavilion has two air handlers totaling 57.5 tons, as well as 100 kW PV solar panels.  Any energy allocated to the chiller and energy storage tanks for the pavilion is offset by the renewable energy generated by the solar panels, thus the pavilion can be classified as net zero.

“Net zero energy is a building market transformation that will eventually be a requirement,” said Mark MacCracken, CEO of CALMAC. “In California, for example, buildings will need to be self-sufficient by 2030. Building owners should prepare to use less energy and generate the rest. Distributed energy storage helps with this preparation by working with renewables to help buildings operate more efficiently.”

This system also has the added benefit of allowing staff to avoid the loud noises associated with generating cooling as the operating engineer is able to schedule when ice is being made and when it is being melted for cooling. In this case, the chillers are scheduled to be active and to produce and store ice after work hours – between 10 p.m. and 6 a.m. Burn times, when the ice is melted to provide cooling for occupants, are scheduled based on time of day and outdoor air temperature (OAT). Below are the general parameters that are used by the operating engineer:

Any energy that is used to create ice in the pavilion is offset by solar panels. On an average sunny day, the PV system is even able to send 50kW back to the grid. The use of ice-based energy storage has allowed the entire facility to capitalize on the cheaper nighttime energy and avoid the tariffs placed on peak energy consumption by CA Lottery’s power supplier, Sacramento Municipal Utility District, during peak demand hours. 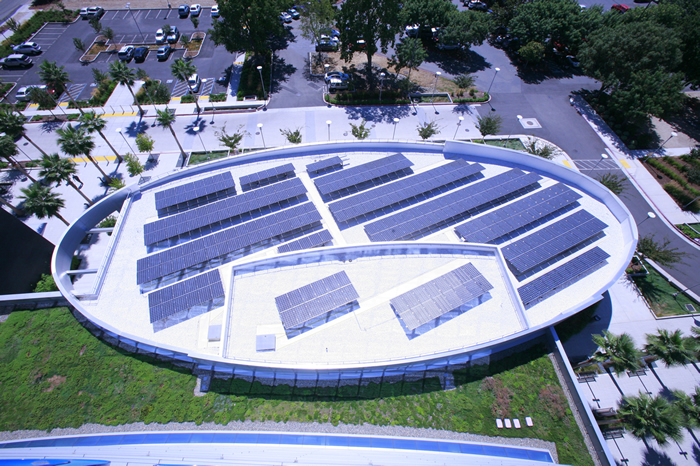 For example, in 2012 CA Lottery was able to save 37 percent per kWh during summer super-peak hours, by using cooling that was created the night before. CA Lottery was also able to reduce cooling costs during on-peak hours by 21 percent during both the winter and summer.

2012 Summer Weekday Time of Use Billing

2012 Winter Weekday Time of Use Billing

“The new facility has been able to fit our needs perfectly,” said Terry Murphy, CA Lottery’s deputy director of operations and their project manager during construction. “The energy storage tanks not only are helping us minimize our utilities costs but it is a popular feature to tell people about when they visit our headquarters and they in turn seem to tell others.”

After completion the new California Lottery headquarters achieved LEED Gold certification by implementing technologies that drastically lowered energy consumption and operating costs. Through the use of building-side energy storage, California Lottery was able to implement a system that benefited both the facility and the utility company by shifting the building’s cooling load away from peak demand hours. Not only is the facility efficient, but California Lottery is even able to generate revenue by renting out the pavilion during the day, when it costs nothing to operate. When the pavilion is not in use, the energy generated from the solar panels is instead utilized to offset costs in the 6-story main structure. Overall, energy storage has helped to create a comfortable, economical and environmentally friendly environment for California Lottery staff and visitors.