With constant innovations hitting the frontiers of solar power research, two recent studies provide a glimpse of new opportunities in way we are harnessing this source of energy.

While solar power has experienced an explosive growth in the past decade for being one of the most effective sustainable energy forms, there’s still a lot to discover. With constant innovations hitting the frontiers of solar power research, two recent studies provide a glimpse of new opportunities in way we are harnessing this source of energy.

According to a study that was published on June 13 in the Journal of CO2 Utilization, Princeton University researchers have found a method to harness sunlight that would help to turn carbon dioxide and water into a potent renewable fuel called formic acid – all by the means of a commercial solar panel. As an effort to mitigate the threats of global warming triggered by the rising concentration of greenhouse gases in the atmosphere, this research is based on a two-pronged approach of storing greenhouse gases and reusing them for the purpose of generating clean energy. The research was conducted in the laboratory of Andrew Bocarsly, a professor of Chemistry at Princeton who partnered with New Jersey’s Liquid Light Inc. for finding ways to use carbon dioxide as a feedstock to produce alternative fuel.

Developed by researchers at the Massachusetts Institute of Technology, a new sponge-like material structure has been found to produce steam by absorbing sunlight. This structure, made from a layer of graphite flake on top of carbon foam, is light, porous and insulating in nature which enables it to float on water. When the sun’s rays comes in contact with the surface of the structure, a hot-spot is created in the graphite which sucks up water through the pores of the material and evaporates it in the form of steam. The rate of steam formation increases with an increase in the intensity of light. Steam generation is a core a component of energy production and electricity generation specifically so this new structure may have wide-ranging implications for the utilization of solar energy. 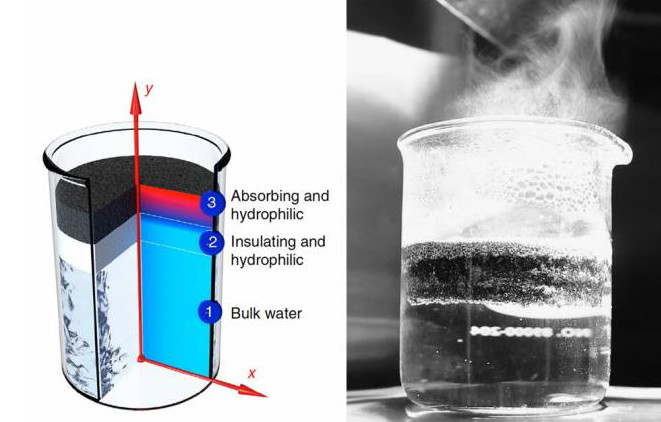 Author Mike Lopez is the founder of the Green Lifestyle startup: MorGreen.org

Posted by Bruce Karney on 03/12/10, 01:49 PM
California Assembly Bill 1947 (AB 1947) would make it possible for everyone, even renters, to lease solar. This is similar to the Neighborhood Net Metering law in Massachusetts. It is slated to be heard in the Assembly Committee on Utilities and Commerce on March 22. See http://info.sen.ca.gov/pub/09-10/bill/asm/ab_1901-1950/ab_1947_bill_20100217_introduced.html for text of the bill. This is a "spot bill," essentially a placeholder to which more precise legislative language will be attached in the If it passes, I predict a transformation of the solar market in California.