California could be at the forefront of these car insurance savings because it is one of the earliest adopters of clean cars (including Hybrids, Plug Ins & electric cars) in the nation.

Most people hesitate to buy cleaner electric vehicle cars because the total cost of ownership is far more expensive than regular gasoline cars even after including for lower fuel costs. However, the scales may be tipping in favor of Electric cars especially in terms of car insurance costs. Nolpeg’s research has shown that electric car owners could save about 5-10%, depending on your car insurance provider.

For example, Hartford announced last year that it would offer a 5% discount to EV owners and the reason they gave for the discount was because of environmental sustainability. However, experts like David Cole, the  chairman emeritus of the Center for Automotive Research, believe it is because it is a smart financial bet. 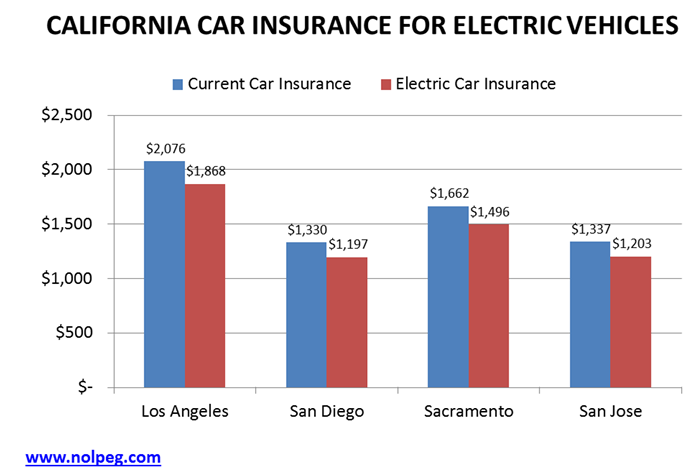 However, not all insurance rates are alike. For example, your insurance premium could go up because you traded in your old Chevy gasoline car worth $5000 for a new Nissan Leaf worth $35,000. Since the new electric car is worth 7 times more than the old gasoline car, the insurance company has to account for the risk for insuring a much more expensive car. Therefore, its best to evaluate your own personal situation and compare multiple offers even if it is for the same car to see which company offers the best quote.

California could be at the forefront of these car insurance savings because it is one of the earliest adopters of clean cars (including Hybrids, Plug Ins & electric cars) in the nation. The below chart shows the Monthly US sales (blue bars) along with the US Cumulative Sales (red line). California accounted for a third of the nation’s clean cars (Green line). 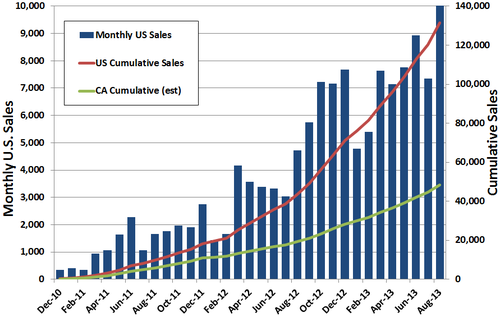 Therefore, as network effects kick in of more & more electric cars, your insurance & total cost of ownership could further reduce.