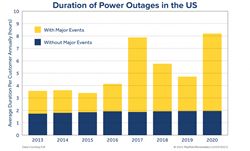 Increasing costs are the result of converging factors, including decreasing supplies of key raw materials, changing logistics and shipping costs, and an unstable labor market. Here's a breakdown of the biggest factors affecting renewables right now.

There are more than 2.5 billion cars, which generate wind turbulence. The same wind turbine which is responsible for huge windmill rotation can be replaced by small efficient traffic wind turbines.

The battery pack cost of $100/kWh is a primary target for Tesla. To achieve this, the company must solve one of the world's most demanding technology challenges - and it is how to increase the volumetric energy density of battery cells while slashing production costs.

Electromobility - the Era of Smart and Clean Transport

The current trials and tribulations faced by the motor sector have been well documented and it's perhaps here where the real reasons for the Model 3's impressive August SMMT figures lie.

On the supply side we need to look at the notion of generate local, consume local. We can begin building micro-grids, or smaller fractal, self-similar grids that are composed into a larger grid infrastructure in economic industrial centers.