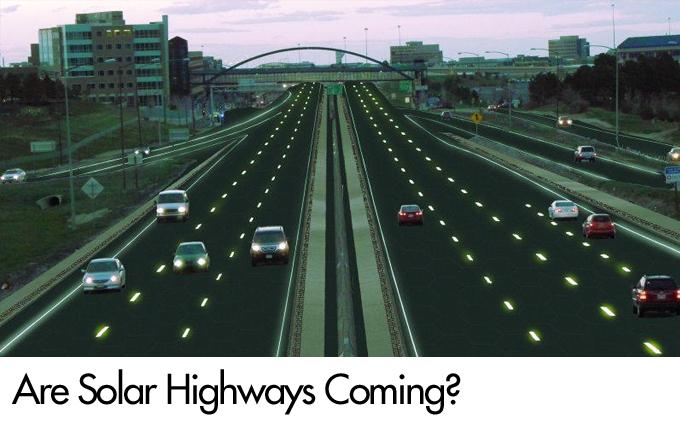 It is well known that concrete and asphalt roads contribute to excessive heat being reflected back to the atmosphere. With the concern of global warming, our attention is being directed toward replacing asphalt and concrete surfaces with solar panels that could be driven upon.

Suppose we made roads out of very durable material, which housed solar cells to collect energy. In time, these roads would pay for the cost of the panels, thereby creating a road that would pay for itself over time.

Maybe we could also add LEDs under the road surface, which would light up at night, making travel safer?  Then, we could add a heating element in the surface to avoid snow and ice accumulation?

Such a highway would be safer and solve the alternative energy problem. With all of these solar panels installed in roadways, there would no longer be power shortages. This would also eliminate the need to burn coal, which produces greenhouse gases. An electric road would allow all-electric vehicles to recharge anywhere, giving them almost unlimited range.

About half of the greenhouse gases are generated by burning fossil fuels to create electricity. Another 25% comes from our vehicles. Therefore, by replacing coal with solar and making electric vehicles practical, the end of the internal combustion engine is a possibility. Plus, we could hypothetically cut greenhouse gas emissions by up to 75%.

Solar highways could solve the climate crisis. With over 28,000 square miles of asphalt and concrete roads, we could produce over three times the amount of energy that we use nationwide. This energy would be clean, renewable energy. Each mile of solar roadways could produce power to run as many as 500 homes.

Above is an artist's rendition of downtown Sandpoint, Idaho, which is the home of Solar Roadways. Julie and Scott Brusaw are the founders of Solar Roadways. Encouraged by his wife, Scott, an electrical engineer with over 20 years of industry experience, created the concept of using solar panels to create alternative energy from our roadways.

The couple's concept is for the traditional asphalt highways to be replaced with a system of structurally-engineered solar panels. These would act as a massive energy generator that could feed the grid during daytime. They would also recharge electric vehicles while moving, thus helping to reduce greenhouse emissions drastically.

The obvious question is — which highway is more expensive? A comparison between asphalt or concrete roads and solar highways is not possible, as an asphalt/concrete road is simply a hard surface, on which to drive a vehicle. A solar highway is a modern modular system with a multitude of uses and features. For an accurate cost comparison between current systems and a solar highway system, you'd have to combine the costs of current roads (including snow removal, line repainting, pothole repair, etc.), power plants (and the coal or nuclear material to run them), and power and data delivery systems (power poles and relay stations) to be comparable with a solar highway system, which provides all three.

Another key point is that solar panels need to be tilted more in the Northern states than in the South. At this position, the optimal solar gain angle for solar panels is 72 degrees. In the South is would be 26 degrees. Therefore, southern roads would produce more energy. Unfortunately, roads or parking lots can't be angled; they have to be flat. Roads go up and down hills, have banks and curves, while traveling both left and right. I think that we can assume that the angle of roads is zero degrees.

Solar Roadways tested two identical solar panels. They mounted one at 72 degrees and leveled the other at zero degrees to simulate an average road. Although the tilted solar panel produced more energy as expected, they were surprised to see the phenomenon of the horizontal solar panel producing more energy than the tilted panel on certain overcast days. It appears to be similar to getting sunburned on a cloudy day. The sunlight is present, but it is scattered, so the horizontal solar panel is more likely to pick up the scattered photons than the solar panel aimed at the southern horizon. To overcome the angle problem, manufacturers must develop new technology to make solar panels more efficient.

It is interesting that headlights can produce energy from solar panels, although it would be very difficult to measure the amount of energy accurately due to distance, speed, hi/low beams, etc.; but a small solar panel placed flat on the ground about 10 feet in front of a vehicle with its high beams on produced electricity in otherwise total darkness.

In 2008, the Oregon Department of Transportation installed a row of solar panels five feet wide and two hundred yards long at an interchange near two interstate highways. The panels feed into Portland General Electric's grid, supplying nearly 30 percent of the power necessary to run the highway's lights at night.

The 104 kilowatt ground-mounted solar array, made up of 594 solar panels, is situated at the interchange of Interstate 5 and Interstate 205 south of Portland, Oregon.

Even with all of its positives, it is important to realize that a solar highway system would be quite costly. Each panel costs about $7,000 to build, and the plan calls for billions of them to cover the roadways. Installation would take huge amounts of time and money, and so would training the crews to maintain them properly. For the most part, it would take several years before the energy generated by the panels would recoup the cost.

We must also consider the durability of these panels since the roads take a great deal of punishment from cars, trucks, motorcycles and tractor trailers, not to mention the fact that they could be damaged by accidents. Since the power for traffic signals and power for electric cars are dependent on the panels, what will happen if they become damaged?

What about areas, such as Texas where sand storms cover the highways? How will these panels be kept clear enough for the sunlight to reach them? Don't forget Alaska, which has some days where the sun only shines for seven hours.

Is a solar highway realistic, or will it prove to be too difficult and costly to implement? Today's generation is very creative. Therefore, I have great hopes for a solar highway system somewhere in the future.