Solar energy is not the only sustainable resource Cool Idea! Award winners have harnessed thus far. 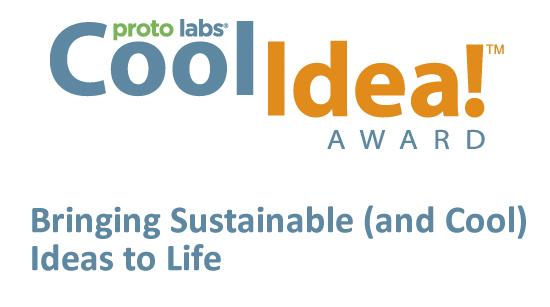 Brilliant ideas for new products emerge every day, but far too often, these promising ideas are abandoned because product development resources and funding can be scarce. Proto Labs recognized this issue, and in 2011 decided to build a program that would help entrepreneurs bring socially beneficial product ideas to market-ready realities. The Cool Idea! Award was then implemented to provide funding for prototyping and low-mid-volume production services to the entrepreneurs developing these new products in both the United States and Europe.

Since the Cool Idea! Award’s establishment, winners have ranged from TruFlavorWare, a line of non-metallic, organic, taste-inert cutlery designed specifically for chemotherapy patients to eliminate the “taste-reactive” electro-chemical reactions caused by metal knives, forks and spoons to FLOOME, a smartphone breathalyzer which can provide users with accurate and reliable blood-alcohol readings alongside a corresponding mobile app capable of estimating when users will reach the legal limit to drive and can call a nearby taxi for transport. However, in recent years, we have begun to see an overwhelming trend in products powered by sustainable energy.

2015’s Cool Idea! Award program marked Skyven Cogen System as its first winner. Developed by Texas based Skyven Technologies, the Skyven Cogen System is a dual-purpose solar panel system that created energy for both electrical power and water heat. It integrates traditional solar photovoltaic, advanced concentrating photovoltaic, and solar water heating into a single, multi-tasking solar panel. These panels can then be installed on both commercial and industrial rooftops and have the ability to provide efficient electricity and water heating to companies, hotels and other large facilities.

“The solar industry is growing tremendously,” explained Skyven founder Arun Gupta. “It’s expanding by double digits every year, it is a nearly $15 billion industry in the U.S. alone, and it is the #2 source of new energy generation in the U.S. after natural gas.”

Solar energy is not the only sustainable resource Cool Idea! Award winners have harnessed thus far. In October 2014, three PhD candidates at Northwestern University won a Cool Idea! Award for the development of AMPY, a wearable device able to convert kinetic energy into mobile power for smart phone charging. A typical day of walking—8,000 to 10,000 steps— gives the user an extra three hours of battery life, and a 30 minute workout can provide an additional 6 hours of battery life. The device can be either attached to a person’s arm or leg, or carried in a backpack, and charges anytime movement is detected.

VOTO, a 2013 Cool Idea! Award winner, struck the perfect balance between utilizing sustainable energy and providing a socially beneficial solution in its product to bring affordable energy to developing countries. The handheld device uses fuel cell technology to transform heat into electricity.. By heating the fuel cell in a simple cook stove, electricity is harnessed and stored in a NiMH battery. Once cooled, the VOTO has the ability to charge a mobile phone or power the device’s accompanying LED light.

With more than 650 million mobile phone subscribers in Africa, Point Source Power, the creators of VOTO, developed a product that solves the problem many people in developing nations face: lack of ready access to electricity. It is typical for these individuals to travel long distances just to charge their mobile phones. Additionally, as kerosene lamps are widely used for home lighting, VOTO intends “to displace dirty, toxic and expensive kerosene lamps with an intuitive LED lighting and phone-charging product that people enjoy using, and which is affordable to the billions of people living without access to modern technology,” says Craig Jacobson, CEO of Point Source Power.

Proto Labs will continue to announce more Cool Idea! Award recipients throughout the year, so keep on the lookout for the world’s next revolutionary product! If you have an innovative, problem-solving, life-improving idea, submit it to the Cool Idea! Award program for the chance to bring it to life.