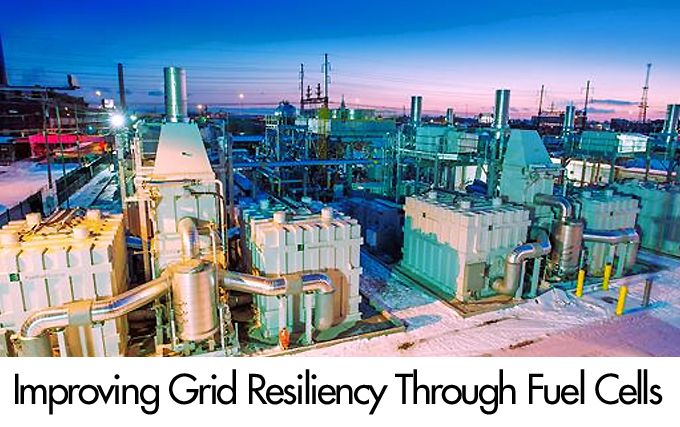 David Carpenter for | The Fuel Cell and Hydrogen Energy Association

America’s electricity grid is among the most reliable in the world.  Every day, utilities provide electricity to our homes, businesses, and industrial facilities safely and reliably.

While few would argue that their track record has been impressive, improvements are always welcomed, particularly in the face of more frequent extreme weather, and a persistent threat of terrorist activities by physical or cyber-attack.

The Northeast has been particularly prone to service disruptions, where prolonged outages have caused significant personal and economic damage.  By one account, the average downtime is 214 minutes per end-user annually. In some of these incidents, outages were caused by an aging transmission system infrastructure that failed during severe weather events, exposing the lack of resiliency of the Northeast power grid.

Traditionally, businesses or large energy consumers utilize diesel back-up generators, to avoid costly outages. However, fuel cell technology is beginning to displace these generators as a way to save money and improve reliability.

Fuel cells generate electricity through an electrochemical reaction, not combustion, so there are no harmful emissions. With few moving parts, fuel cells are also efficient and quiet.  And when utilizing natural gas lines from underground pipes, they are far less likely to be damaged by weather events.

From high efficiency and reliability, to fuel flexibility and low emissions, fuel cells provide distinct advantages over incumbent electrical generation technologies, and help answer the question of how to sustain the northeastern grid during and after a severe storm.

During Hurricane Irene, power outages left residents and businesses without power and disabled telecommunication towers for hours. However, Sprint’s fleet of ReliOn fuel cells performed flawlessly, providing emergency power to the towers for a cumulative 725 hours.

Likewise, during Superstorm Sandy, Doosan fuel cell systems in New York and Connecticut remained in operation, running independent of the grid and providing heat and electricity throughout the crisis.

Fuel cells at Price Choppers in Colonie, New York, and Middletown, Connecticut, operated independent of the grid for five and six days, allowing the supermarkets to keep food available, the lights on, registers open, and the hot water system functioning. At Stop & Shop in Torrington, Connecticut, the fuel cell system provided the grocery store with power, heating and cooling while the grid power was intermittent.

At Delmarva Power in New Castle, Delaware, Bloom Energy fuel cells continued to operate without disruption, feeding power to the grid while Superstorm Sandy passed directly overhead.  Delmarva provided continuous power to more than 503,000 customers throughout Delaware and along the eastern shore of Maryland while other many parts of the electric grid remained offline.

Some states have taken a lead in encouraging resiliency through fuel cells. Connecticut, through the state’s Department of Energy & Environmental Protection (DEEP) Microgrid Pilot Program awarded funding to two fuel cell microgrid projects in 2013.  Through this program, the University of Connecticut Depot Campus received installed a 400 kW fuel cell, and in 2014, the University of Bridgeport finished a microgrid project that includes a 1.4 MW fuel cell to keep critical facilities powered when the grid goes down.

Other Northeast state governments are also supporting fuel cells, as documented the 2014 State Policy Activity Wrap Up Fuel Cells & Hydrogen.  The report aggregates state-level policies and funding opportunities that support the development and deployment of fuel cell and hydrogen technologies.

We have witnessed how vulnerable the Northeast power gird is, and without preparation, the next severe weather event could prove disastrous and very costly.

It will take time to strengthen and improve the Northeast grid, but with policies that promote the adoption of fuel cells, the Northeast can reverse the trend of spotty grid resiliency and build a true 21st century electric infrastructure.

ABOUT THE FUEL CELL AND HYDROGEN ENERGY ASSOCIATION

The Fuel Cell and Hydrogen Energy Association is the trade association dedicated to the commercialization of fuel cells and hydrogen energy technologies, representing the full global supply chain, including materials, components and systems manufacturers, hydrogen producers and fuel distributors, government laboratories and agencies, trade associations, utilities, and other end users.