The SESG Lab can replicate the operation of a substation and feeders of an electrical utility distribution system, thanks to its core infrastructure that supports organizations in the research and development of leading edge solutions and systems pertaining to smart grid technology.

What is the Schneider Electric Smart Grid (SESG) Laboratory?

The SESG Laboratory is the first university-based smart grid lab in Canada. This facility replicates the operation of an electrical utility distribution system at a reduced scale and is available to partners and collaborators looking to test new products, implement pilot projects, conduct research and train employees. The lab will also train a future generation of engineers, scientists, planners and operators. It’s ideal for research, testing and training because it gives everyone a real-life smart grid experience.

Who will be the primary users of the SESG Laboratory?

We’re anticipating there will be several primary users of the SESG Lab. Utilities can use this space to test new products to mitigate the risks for field operation, conduct research on the operation of a Local Distribution Company (LCD), train employees, execute pilot projects, etc.

For universities and colleges, the lab is an ideal environment to learn about the operation of a smart grid, for R&D and collaboration with the electrical industry. Finally, the lab can be used as a sandbox to test new products or algorithms built by entrepreneurs or established vendors.

What kind of equipment can be tested and developed at the SESG Lab?

The SESG Lab can test solutions and strategies that include many devices or products under different scenarios, depending on the needs of each utility. Some examples are: use of advance metering systems, integration of renewables, the functionality of an advanced distribution management system in a network, reduction of energy bills through volt/var control, etc.

What are the benefits to users when you build smart grid laboratories?

In the SESG Lab, industry, utilities and academia can evaluate new solutions for compliance with new operational standards, interoperability and utility applications prior to field tests and certification. The facility provides a platform for utilities to evaluate products / solutions in a lab environment to assess the reliability and safety. The SESG Lab will serve as a proving ground for specific utility needs such as finalizing system designs, verifying business case projections, mitigating business and technology risk, and ensuring efficient smart grid deployment. 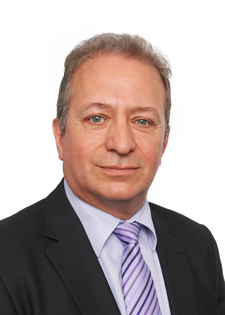 Why did Schneider Electric become involved in the Smart Grid laboratory?

We believe facilities like the SESG Lab will allow Canadians to build a more efficient and sustainable energy future. By partnering with Ryerson University we are not only contributing to the testing and demonstration of technology, we are also creating a space for future generations to get hands-on experience in tackling the challenges we face now. Ryerson University is a cutting-edge institution and SE is a leader in smart grid technology. It’s a perfect marriage!

How does the SESG Laboratory fit into Schneider Electric’s North American strategy?

Schneider Electric is a global company with operations in more than 100 countries and the North American market is a big part of our present and future plans. We have made major investments in North America – not only in energy but in process automation, the oil and gas industry, the water/wastewater industry, data centre technology and the metals/minerals/mining industries. In the energy business, we are committed to helping North American producers build more efficient, reliable electrical grids and solutions and the SESG Lab helps us achieve that goal.

Are smart grid labs the future of electrical research and development?

Not all electrical research and development will take place in smart grid labs. We will also need pilot projects. But we believe facilities like the SESG Lab will play an integral role in the near future of electrical industry research and development. Utilities, vendors and entrepreneurs need test beds to trial new products and strategies in a real-world environment and the SESG Lab is an ideal environment for them.

Why is it important to build labs to test smart grid technology?

Labs like the SESG Lab give researchers access to facilities and processes that resemble a working smart grid. But unlike a real-life smart grid, there are no consequences if a product or algorithm doesn’t work like it’s supposed to. Smart grid labs allow utilities, vendors, researchers, entrepreneurs and educational institutions to refine their research and skills training and ultimately give them the means to deliver energy more efficiently and reliably.

Léonce Fraser, Vice President, Projects Execution Centre Schneider Electric Canada
Léonce Fraser obtained a Bachelor of Engineering from University of Quebec in Mechanical Engineering, with a major in Technology in 1987. He also holds an MBA from HEC Montreal in International Business. In 2017 he completed an Executive Certificate in Strategy and Innovation from MIT Sloan School of Management.
He has been involved in the electricity industry for over 30 years. His background includes extensive executive leadership in engineering, sales, operations and project management. Leonce has a wealth of experience in leading and managing large teams of people, both locally and internationally.
Léonce is currently member of the Center for Urban Energy’s Advisory Council at Ryerson University. He has also held the position of Chairman of Board of Directors at the Association de l’industrie électrique du Quebec (AIEQ).