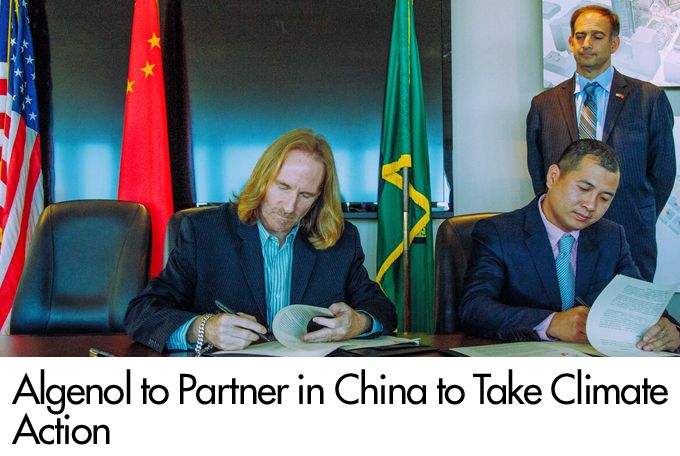 Algenol's technology changes the game by taking CO2 emissions from being an economic and legal liability into a revenue-generating asset.  This innovative aspect of our technology will encourage quick adoption around the globe.

Chinese President Xi Jinping has made a strong commitment to reduce carbon emissions by recently announcing a nationwide cap-and-trade program to address pollution and climate change. Algenol's technology is the leading solution to help with this mission. Earlier this year, Algenol was invited by the US Department of Energy and the US Department of Commerce to participate on the Smart Cities, Smart Growth, and Business Development Mission to China. This experience gave me first-hand insight into China's commitment to improving air quality and action on climate change. The mission also recognized Algenol’s technology as the most attractive CO2 utilization strategy for deployment in China. Zhongyuan New Energy Company, Ltd. has an experienced and effective management team and is currently a leader in marketing and distributing advanced, clean, renewable fuels in Southern China. Our partnership will allow the two companies to explore commercialization opportunities for Algenol’s technology in China to make a positive impact on China’s air quality, renewable fuel supply and clean water supply.

At the core of Algenol’s technology is our proprietary algae that uses sunlight, saltwater, and CO2 and converts them into sustainable fuels and clean water. Our patented process utilizes CO2 directly from industrial sources as a feedstock, which is effectively like sticking a straw into an emissions stack of the coal-fired power plant or industrial manufacturing facility.  Algenol’s technology is credited with reducing greenhouse gas (GHG) emissions by 69%, compared to gasoline, according to an analysis by the U.S. Environmental Protection Agency. In fact, from a carbon footprint perspective, a single 2,000 acre commercial Algenol module is the equivalent to planting more than 40 million trees or removing 36,000 cars from the road.

How can Algenol make a global economic impact?

Whether pollution is local, or halfway around the world, we all share the same atmosphere. Other carbon solutions, such as chemical carbon capture and sequestration (CCS), are prohibitively expensive. Algenol's technology changes the game by turning CO2 emissions from being an economic and regulatory liability into a revenue-generating asset. Algenol’s game changing technology provides three critical global solutions: climate change mitigation, advanced renewable fuel production, and production of clean fresh water. Our innovative technology has already attracted substantial investments and interest from partners in Mexico, India, China and the Middle East and will continue to encourage quick adoption around the globe. Algenol’s technology is already operational in the United States and India in commercial pilot facilities. Our Mexican partner has plans to deploy a pilot facility in the near future. In addition to this announcement of our new partnership in China, we are exploring partnerships in the Middle East.

How has Algenol’s technology been recognized throughout the Industry?

Algenol has become the recognized leader in the biofuels industry. In 2015, Algenol won the prestigious 2015 Presidential Green Chemistry Award for Climate Change. It was the inaugural year for that category and recognized our ability to capture and utilize carbon dioxide directly from the industrial source. In 2014, we were also honored with the Global Leadership Award in Biofuels from PLATTS.

What are Algenol’s current commercialization plans?

Algenol’s commercial readiness has greatly advanced over the past two years as we have achieved a series of successful commercialization milestones, including:

Algenol is currently producing ethanol meeting the D4806 ASTM specifications on a daily basis which can be sold commercially as E85.  This year, we signed our first distribution agreement with Protec Fuels in the United States, and we will begin selling ethanol in the near future. We are also in the late stages of site selection and will begin site planning, preparation and construction on our first full-scale 2,000 acre commercial facility in Florida beginning in 2016. This facility will have an output of 18 million gallons of liquid fuel per year when it hits full production capacity. Over the past two years, our talented team of scientists and engineers also engineered complementary cultivation and downstream processing systems to optimize carbon utilization and conversion into valuable commodities.

About Algenol
As a recognized leader in the biofuels industry, Algenol is leading the charge in innovative and cost effective solutions to mitigate climate change. Algenol’s patented DIRECT TO ETHANOL® technology represents a paradigm shift as the only demonstrated process to monetize CO2 by utilizing coal flue gas directly from industrial sources to produce the four most important advanced renewable transportation fuels and clean water. Algenol is a global, industrial biotechnology company that is commercializing its patented algae technology platform for production of ethanol and other biofuels.  Algenol’s patented technology enables the production of the four most important fuels (ethanol, gasoline, diesel, and jet fuel) for around $1.30 per gallon each using proprietary algae, sunlight, carbon dioxide and saltwater at production levels of 8,000 total gallons of liquid fuel per acre per year. Algenol's technology produces high yields and relies on Algenol’s patented photobioreactors and proprietary downstream separation techniques for low-cost fuel production. These novel, low-cost techniques have the added benefit of consuming carbon dioxide from industrial sources, not using farmland or food crops and being able to provide freshwater.