Introduction of biofuels is proceeding so quickly, that the environmental risks of biofuel production are being disregarded. Without careful and thorough assessment and regulation, the promise of biofuels may well be delayed. 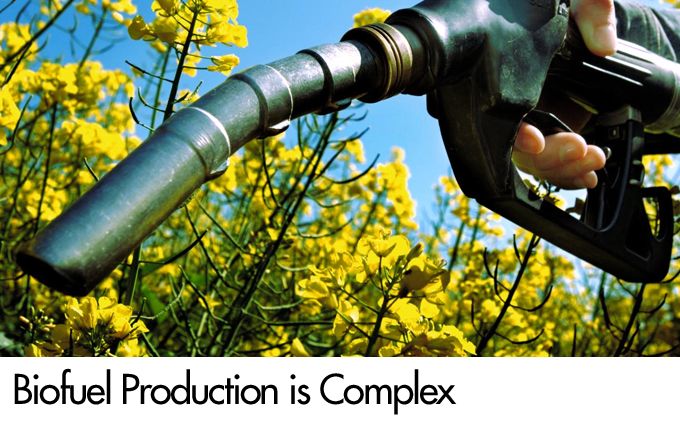 America's dependence of foreign fuels has drastically changed. We are now exporting oil, rather than importing it. Fracking has made us the largest producer of natural gas on earth, according to the U.S. Energy Information Administration. We are also the world's largest producer of biofuels in the world.

Fracking is the process of drilling down into the earth before a high-pressure water mixture is directed at the rock to release the gas inside. Water, sand and chemicals are injected into the rock at high pressure which allows the gas to flow out to the head of the well.

Biofuel is defined as any fuel whose energy is obtained through a process of biological carbon fixation. Any process that converts carbon dioxide into a molecule that would be found in a living organism is carbon fixation. Carbon fixation can lead to a number of different compounds, like proteins, fats, and alcohols. If any of those molecules can be used to provide energy in a mechanical setting, we call it a fuel.

A biofuel is a hydrocarbon that is made by or from a living organism that we can use to generate energy. Any hydrocarbon fuel that is produced from organic matter in a brief period of time is considered a biofuel; unlike fossil fuels, which take millions of years to form. Biomass feedstocks for energy production can result from plants grown exclusively for energy or from plant parts, residues, processing wastes, and materials from animal and human activities.

Collecting feedstock to convert into biofuels can be complex and costly. Harvesting, packaging, loading and transporting feedstock is complicated. The chemical structure of biofuels can differ in the same way that the chemical structure of fossil fuels can differ. For the most part, interest is in liquid biofuels as they are easy to transport. The table below compares various biofuels with their fossil fuel counterparts.

With 14.3 billion gallons of domestic ethanol production in 2014, America is exporting biofuels. The U.S. accounts for 43 percent of the biofuels produced, with Brazil at 33 percent.

In 2014, about 13 billion gallons of fuel ethanol were added to gasoline produced in the United States. Fuel ethanol accounted for about 10% of the total volume of finished gasoline consumed.

Although biofuels are the ideal replacement for fossil fuels, biofuel production should not be permitted where it jeopardizes the price and supply of food and crops essential for human consumption or animal feed. The impact on the people in poor, developing countries is already a problem when farmers can obtain greater profits by using their land for biofuels than for food. Price increases have occurred in biofuel feedstock markets for sugar, corn, rapeseed oil, palm oil and soybeans.

Measures need to be implemented to prevent deterioration of the land used for biofuels through monoculture utilization. However, by using bio-char, intercropping, crop rotation, double cropping and conservation tillage, soil erosion can be reduced, soil quality improved, water consumption decreased, and the vulnerability of crops to pests and disease lessened.

Regulations are especially needed to prevent the over usage of water supplies during the growing of biofuels feedstocks. Corn and soy require substantial water. Feedstock such as sweet sorghum requires minimum water, fertilizers, and pesticides.

To make certain that a sustainable source of high quality feedstock is available, all elements of the supply chain must be efficient—from crop production and harvesting to biomass preprocessing, transport, and storage. Sustainable feedstock production includes all the steps required to produce biomass feedstocks to the point where it is ready to be collected or harvested from the field or forest, while feedstock logistics encompasses the operations necessary to harvest the biomass and transport it from the field or forest to the biorefinery.

Technologies are being developed to produce consistent, quality controlled biomass products that can be efficiently handled, stored, transported, and utilized by biorefineries. To supply feedstock to the biomass conversion industry, the logistics concept must incorporate distributed biomass preprocessing depots located near the biomass production sites, which can reduce variability in the biomass early in the feedstock logistics chain through milling, densification, and other processing technologies.

These satellite storage locations or satellite depots near the production sites are currently envisioned as transitory storage locations for square or round bales typically using standard farm equipment; and can include moderate processing, usually densification of biomass, before delivering the biomass to the biorefinery.  Such depots are currently being used by the Tennessee Biomass Supply Cooperative where these facilities perform functions such as aggregation, storage, and pre-processing and intermediate processing of switchgrass and corn cobs.

From the depot, the standardized biomass is forwarded to one of a network of much larger supply terminals where the biomass is further processed to meet the quality specifications required by the conversion process it supplies. Finally, the preprocessed biomass is sent to the biorefinery. The supply system is modeled similarly to the current commodity grain model. The goal of this strategy is to integrate time-sensitive feedstock collection, storage, and delivery operations into efficient, year-round supply systems that deliver consistently high-quality, compatible feedstocks to the variety of biorefineries served.

None of these potentials will be realized, if standards are not implemented to provide against the substitution of food crops for fuel, the elimination of danger to clean water, and avoidance of corrosion of the land. Introduction of biofuels is proceeding so quickly, that the environmental risks of biofuel production are being disregarded. Without careful and thorough assessment and regulation, the promise of biofuels may well be lost.