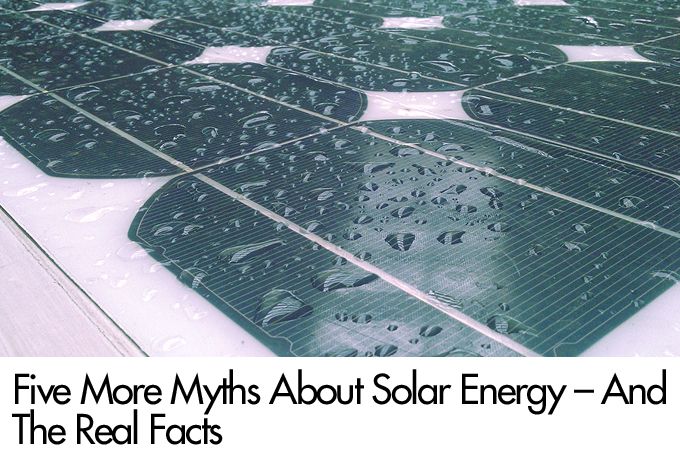 Myth 1: Cheap coal and the current energy mix (often dirty fossil fuel or nuclear) will continue to dominate global energy production for the foreseeable future. Fact: Don't bet on it. If you don’t believe me or most scientists, just follow the money. Utility company bonds are being downgraded on Wall Street since their business models – based on power generation monopoly – are being challenged by vast amount of self-generated electricity. The cost of distributed energy generation has dropped significantly, and this has hurt for-profit utilities. In many nations like Germany, solar power has already reached ‘grid parity’.

Myth 2: Solar cells are ugly and an eye sore for landscapes and urban areas. Fact: Admittedly, current methods of installing traditional silicon solar panels on top of roof tiles does change the architectural expression of many old buildings in a negative way. But the BIPV trend (building integrated photovoltaics) brings solar cells to your neighbourhood without anyone noticing it. Thin film and light weight flexible solar panels can be nicely integrated into the roofing materials resulting in not only pleasant aesthetics but also inexpensive installation.

Myth 3: In the future, solar cells can be painted onto facades with a paint brush. Fact: Sure, BIPV is very exciting and this myth has spread in popular science but this is not likely, at least not in our lifetime. The third generation dyed synthesized solar cells are extremely sensitive to humidity and sun light degrades them. They can not be applied with a brush. They must also be encapsulated and connected by series circuit etc.

Myth 4: Thin film solar cells are made by rare earth elements like indium and we will eventually (or soon) run out of them. Fact: Some scientists and politicians claim that we will run out of rare materials like indium, much as we are depleting the world’s oil reserves. But that is simply not true. Indium, silicon, gallium etc are basic chemical elements as found in the periodic table and are as such indestructable. They cannot “run out”, just change shape, location and application. But there will always be as much indium on earth as there has ever been, and it can be recycled. There is three times as much indium in the earth’s crust than silver but no one claims that we will run out of silver... Also, solar cell manufacturing equipment suppliers have managed to halve the thickness of thin film solar cells in recent years and in the process greatly reduce the amount of rare materials needed.

Myth 5: In the future everything will be powered by solar energy. Fact: well, there is certainly a case for being optimistic about solar energy but the future will bring a diversified energy mix, just as today. The renewable energy portion of the mix will grow, but there will still be a mix of solar, wind, hydro and other energy sources.