Despite the fact that tracking systems are more complex than fixed-tilt systems, they represent the future of the industry and a glimpse of all that is possible in terms of solar energy capacity. 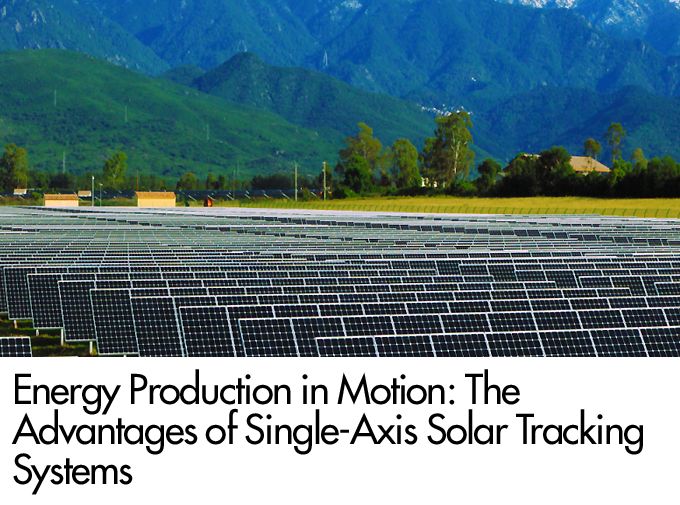 With solar energy expanding in popularity among property owners and energy companies, the challenge for many of today’s installation companies is delivering optimum yield for minimal expense. In a growing number of situations, tracking arrays (those that follow the path of the sun throughout the day, rather than remaining in a single static position), are an appealing answer. In fact, tracking systems can improve production by as much as 45% over fixed-tilt systems depending on location1.

At the same time, these systems are more complex than their static counterparts, requiring additional considerations on the part of installers in order to ensure peak performance. As with any product with moving parts and components, installation methods for traditional arrays are only partially effective.

Base mounting, wire placement, and array layout can all impact whether or not a tracking system is appropriate for a particular piece of land, and whether or not the additional expense of the equipment can be justified by the increase in output.

Leading equipment manufacturers and forward-thinking installers are increasingly addressing these challenges through a number of features designed to simplify installations and improve the cost-value balance of tracking systems.

Inside a Tracking Solar Array

While beam-driven ground-mounted arrays are indeed popular, they are not with-out challenges. Some of these include soil types, terrain, drainage, and other vari-ables that can impact overall performance of the array over time.

Ballasted ground arrays overcome the hurdles of beam-driven arrays by using weight and friction to secure the racking system in place. One cornerstone of this is the ballast itself, of course, but a much larger consideration is the overall design of the racking system and its ability to resist corrosion, weather, and other elements that may diminish the array’s output.

Tracking arrays are designed to pick up what would otherwise be lost opportunity by literally following solar position at every minute, hour, and day of the year – without requiring manual adjustment.

Types of Tracking Systems vary from region to region, usually depending on the maximum variance of the sun’s position in the sky throughout the year. In some areas such as Europe, Northern Canada, Australia, and portions of South America (those located further away from the equator) will see more variance than those in the continental U.S. and the Caribbean.

HORIZONTAL SINGLE-AXIS TRACKERS (HSAT) – most often these systems align on a north/south axis to provide east-west movement as the sun moves through the sky.

HORIZONTAL TILTED SINGLE-AXIS TRACKERS (HTSAT) – essentially the same as HSAT modules, but the entire system is mounted at a fixed tilt… most often used in high alti-tudes or latitudes on the borderline between ideal fixed-tilt zones and those requiring vertical-rotation systems.

VERTICAL SINGLE-AXIS TRACKERS (VSAT) – these systems can be mounted in north/south or east/west orientation to follow more “up-and-down” movement of the sun in the sky. These are most often seen in high-altitude/mountainous locations or those at more extreme latitudes.

VERTICAL-TILTED SINGLE-AXIS TRACKERS (VTSAT) – similar to HTSATs except that the tilt aligns to a horizontal position and rotates on a vertical axis.

DUAL-AXIS TRACKERS – arrays move on both a horizontal (east-west) axis and a vertical (north/south) axis. It is typical to see these arrays appear to be pole mounted, or on a ring of rotating rollers.

Each system has its own set of advantages and disadvantages, and in some challenging locations may be the only solution available for a particular site. However, for the large majority of locations (those located between 20°N and 50° N and/or between 20°S and 50°S) the vertical position of the sun varies so little during the year, single-axis tracking systems offer increased yield with the lowest additional expense.

The promise of increased capacity is indeed one of the greatest advantages of tracking systems… but it doesn’t come for free. Unlike fixed-tilt systems, tracking systems require more space per module to allow for the rotation of the PV panels and eliminate all possible shadowing. In turn, this often requires more complicated trench systems for cables and wire management, raising the installation and maintenance costs of the total project.

The latest innovation in the industry to overcome this challenge is optimized site design. Rather than simply “making do” with north/south orientation of the site, site design adjusts the array layout unique to its specific latitude and optimal vertical tilt angle, often allowing for more modules and a more streamlined infrastructure. The impact on the cost-value balance in site design scenarios is substantial. Hard costs of installation (equipment and man hours) are reduced and yield and output are increased.

While machines are designed to save time and energy over human efforts performed by hand, they also require maintenance and upkeep to work as expected day-in, day-out. So while fixed-tilt racking systems are relatively simple in their construction and design, tracking systems include moving parts, motors, and more. This presents a number of possible maintenance issues:

APPROPRIATE WEIGHT/POWER RATIO – solar arrays are built to withstand constant exposure to the elements. Galvanized steel is considered to be the most widely used material for PV racking systems, and is not particularly lightweight. PV panels themselves are also heavier than most would expect. This means motors that rotate tracking systems must should be optimized for the selected hardware.

The most reliable and durable tracking systems offer motors that require:

EXPOSURE TO ENVIRONMENT – for their lifespan outdoors, motors and tracking components must be able to perform in the face of varying temperatures, moisture, wind, and more.

Closed motor systems (those encased in plastic or other weather-resistant material) offer the greatest level of protection from outdoor elements.

Example of a horizontal single-axis tracker. The Exotrack® HZ is a system that requires only 5 motors for 1 MWp of solar trackers with only 30 minutes of daily operation.

SOLAR TRACKING CONTROL – Tracking systems also require a control command system of some sort to ensure systems are performing to specifications. Professional-quality systems are customized to each solar plant and provide ongoing insight into the short-term and long-term performance of the array. This information may be available on site, or, in the case of some systems, available remotely through web applications which reduces the frequency of site visits.

Solar energy is absorbed two ways – direct beam exposure and diffuse sunlight exposure. Of these two, direct beams of sunlight account for 90% of the energy collected from any solar installation. It is also the reason why fixed-tilt solar arrays are placed at an optimum angle for absorbing the maximum amount of direct sun-light. Clearly, shadows and obstructions can reduce the yield of an array consider-ably, even with a tracking system in place.

The traditional solution to this challenge is to set a maximum tilt angle for the en-tire array that is equal to or less than the angle at which the first modules in the array begin to experience shading. Some capacity is lost through this practice – a minimal amount of 2% to 5% on average, which can either be considered as an acceptable loss in the face of overall increased production, or can be a drawback as it may decrease production to a break-even point that doesn’t justify the cost of a tracking array.

Industry innovators have been quick to suggest alternatives to this backtrack loss scenario, most notably through customized backtracking that adjusts each tracker to its own optimal tilt, rather than to the minimum standards of the entire array. SMARTracking™ by Exosun is one such example that has been measured to generate up to a 5% yield increase in comparison to traditional solar tracking systems.

As with all solar installations, cost is an important factor. In this report, there have been several mentions of the cost-value balance, or simply the cost of the system balanced against the output it generates, and how quickly vs. a traditional fixed-tilt system. As a reminder, fixed-tilt systems may include ground mounted (driven beam, ballasted or otherwise anchored), and roof mounted (ballasted).

A closer examination of this scenario would be to compare tracking and stationary systems designed to deliver the same end result. Let’s suppose the end goal was to reach a certain output for the lowest possible equipment cost. Tracking systems will initially cost more than stationary ones, but are 25% more efficient… which means if you needed 100 stationary modules to reach your goal, you could do the same with only 75 tracked modules, bringing your equipment cost down significantly.

You’d also need less land/available space for your array, which cuts down on real estate and property costs. So in a good land-based site with the appropriate climate for solar collection, the tracking system is a clear winner.

Traditionally, solar trackers optimize the production of large scale plants, but today, thanks to smarter system design and layout, the supply of medium and small scale plants in tighter space is also expanding.”

Making Clean Energy Work for You

Despite the fact that tracking systems are more complex than fixed-tilt systems, they represent the future of the industry and a glimpse of all that is possible in terms of solar energy capacity. Innovative manufacturers are helping installers and property owners realize these benefits now, even as the rest of the industry is still moving towards greater capacity initiatives.

By partnering with reputable, established manufacturers now, installers and property owners will be ahead of market changes, and often at a reduced equipment and installation cost for ideal sites and conditions.

DCE Solar is proud to have been a part of the clean energy movement since 2009 and is committed to expanding the availability and use of clean energy to homes, businesses, and properties throughout the country.

To learn more about our products and services designed for Solar Energy, or for more information about our other clean energy resources and initiatives, please visit us online at dcesolar.com or call us at 704-659-7474.