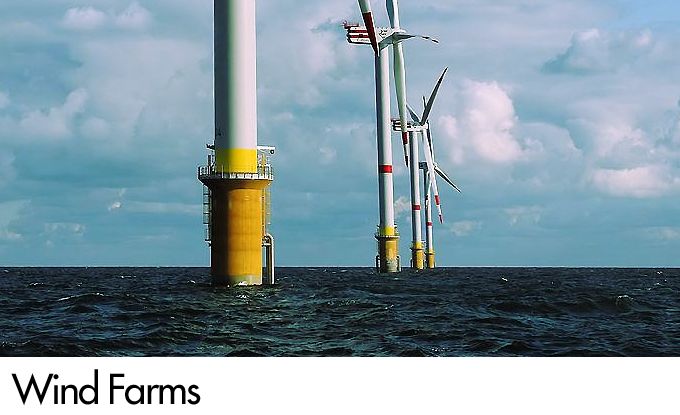 Wind energy or wind power is extracted from air flow using wind turbines or sails to produce mechanical or electrical energy. Windmills are used for their mechanical power, windpumps for water pumping, and sails to propel ships. A wind farm or wind park is a group of wind turbines in the same location used to produce electricity. A large wind farm may consist of several hundred individual wind turbines and cover an extended area of hundreds of square miles, but the land between the turbines may be used for agricultural or other purposes. A wind farm can also be located offshore. Many of the largest operational onshore wind farms are located in Germany, China and the United States. In just five years, China leapfrogged the rest of the world in wind energy production, going from 2,599 MW of capacity in 2006 to 62,733 MW at the end of 2011. However, the rapid growth outpaced China's infrastructure and new construction slowed significantly in 2012.

A windfarm or wind park is a group of wind turbines in the same location used to produce electricity. A large wind farm may consist of several hundred individual wind turbines and cover an extended area of hundreds of square miles, but the land between the turbines may be used for agricultural or other purposes. A wind farm can also be located offshore.

In just five years, China leapfrogged the rest of the world in wind energy production, going from 2,599 MW of capacity in 2006 to 62,733 MW at the end of 2011. However, the rapid growth outpaced China's infrastructure and new construction slowed significantly in 2012.

At the end of 2009, wind power in China accounted for 25.1 gigawatts (GW) of electricity generating capacity, and China has identified wind power as a key growth component of the country's economy. With its large land mass and long coastline, China has exceptional wind resources. Researchers from Harvard and Tsinghua University have found that China could meet all of their electricity demands from wind power by 2030.

By the end of 2008, at least 15 Chinese companies were commercially producing wind turbines and several dozen more were producing components. Turbine sizes of 1.5 MW to 3 MW became common. Leading wind power companies in China were Goldwind, Dongfang Electric, and Sinovel along with most major foreign wind turbine manufacturers. China also increased production of small-scale wind turbines to about 80,000 turbines (80 MW) in 2008. Through all these developments, the Chinese wind industry appeared unaffected by the global financial crisis, according to industry observers.

According to the Global Wind Energy Council, the development of wind energy in China, in terms of scale and rhythm, is absolutely unparalleled in the world. The National People's Congress permanent committee passed a law that requires the Chinese energy companies to purchase all the electricity produced by the renewable energy sector.

Fig. 3 The Shepherds Flat Wind Farm is an 845 MW wind farm in the U.S. state of Oregon.

New installations place the U.S. on a trajectory to generate 20% of the nation’s electricity by 2030 from wind energy. Growth in 2008 channeled some $17 billion into the economy, positioning wind power as one of the leading sources of new power generation in the country, along with natural gas. Wind projects completed in 2008 accounted for about 42% of the entire new power-producing capacity added in the U.S. during the year.

At the end of 2008, about 85,000 people were employed in the U.S. wind industry, and GE Energy was the largest domestic wind turbine manufacturer. Wind projects boosted local tax bases and revitalized the economy of rural communities by providing a steady income stream to farmers with wind turbines on their land. Wind power in the U.S. provides enough electricity to power the equivalent of nearly 9 million homes, avoiding the emissions of 57 million tons of carbon each year and reducing expected carbon emissions from the electricity sector by 2.5%.

Texas, with 10,929 MW of capacity, has the most installed wind power capacity of any U.S. state, followed by California with 4,570 MW and Iowa with 4,536 MW. The Alta Wind Energy Center (1,020 MW) in California is the nation's largest wind farm in terms of capacity. Altamont Pass Wind Farm is the largest wind farm in the U.S. in terms of the number of individual turbines [3].

Fig. 4 Brazos Wind Farm in the plains of West Texas.

As a general rule, economic wind generators require windspeed of 16 km/h or greater. An ideal location would have a near constant flow of non-turbulent wind throughout the year, with a minimum likelihood of sudden powerful bursts of wind. An important factor of turbine siting is also access to local demand or transmission capacity.

Usually sites are screened on the basis of a wind atlas, and validated with wind measurements. Meteorological wind data alone is usually not sufficient for accurate siting of a large wind power project. Collection of site specific data for wind speed and direction is crucial to determining site potential in order to finance the project. Local winds are often monitored for a year or more, and detailed wind maps constructed before wind generators are installed.

The wind blows faster at higher altitudes because of the reduced influence of drag. The increase in velocity with altitude is most dramatic near the surface and is affected by topography, surface roughness, and upwind obstacles such as trees or buildings. Typically, the increase of wind speeds with increasing height follows a wind profile power law, which predicts that wind speed rises proportionally to the seventh root of altitude. Doubling the altitude of a turbine, then, increases the expected wind speeds by 10%, and the expected power by 34%.

Individual turbines are interconnected with a medium voltage (usually 34.5 kV) power collection system and communications network. At a substation, this medium-voltage electric current is increased in voltage with a transformer for connection to the high voltage transmission system. Construction of a land-based wind farm requires installation of the collector system and substation, and possibly access roads to each turbine site [3].

A wind turbine is a device that converts kinetic energy from the wind into electrical power. The term appears to have migrated from parallel hydroelectric technology (rotary propeller). The technical description for this type of machine is an aerofoil-powered generator.

The result of over a millennium of windmill development and modern engineering, today's wind turbines are manufactured in a wide range of vertical and horizontal axis types. The smallest turbines are used for applications such as battery charging for auxiliary power for boats or caravans or to power traffic warning signs. Slightly larger turbines can be used for making contributions to a domestic power supply while selling unused power back to the utility supplier via the electrical grid. Arrays of large turbines, known as wind farms, are becoming an increasingly important source of renewable energy and are used by many countries as part of a strategy to reduce their reliance on fossil fuels [2].

Vertical-axis wind turbines (or VAWTs) have the main rotor shaft arranged vertically. One advantage of this arrangement is that the turbine does not need to be pointed into the wind to be effective, which is an advantage on a site where the wind direction is highly variable. It is also an advantage when the turbine is integrated into a building because it is inherently less steerable. Also, the generator and gearbox can be placed near the ground, using a direct drive from the rotor assembly to the ground-based gearbox, improving accessibility for maintenance.

The key disadvantages include the relatively low rotational speed with the consequential higher torque and hence higher cost of the drive train, the inherently lower power coefficient, the 360 degree rotation of the aerofoil within the wind flow during each cycle and hence the highly dynamic loading on the blade, the pulsating torque generated by some rotor designs on the drive train, and the difficulty of modelling the wind flow accurately and hence the challenges of analysing and designing the rotor prior to fabricating a prototype.

When a turbine is mounted on a rooftop the building generally redirects wind over the roof and this can double the wind speed at the turbine. If the height of a rooftop mounted turbine tower is approximately 50% of the building height it is near the optimum for maximum wind energy and minimum wind turbulence. Wind speeds within the built environment are generally much lower than at exposed rural sites, noise may be a concern and an existing structure may not adequately resist the additional stress.

[1]- Harness the Power of Wind, National Geographic. Retrieved from: http://environment.nationalgeographic.com/environment/global-warming/wind-power-interactive.html

[2]-Wind turbine, From Wikipedia, the free encyclopedia. Retrieved from: https://en.wikipedia.org/wiki/Wind_turbine

[3]-Wind farms, From Wikipedia, the free Encyclopedia. Retrieved from: https://en.wikipedia.org/wiki/Wind_farm