So far, lithium has been the hottest metal of 2016, beating out gold, with exponential demand expected over the coming years. Although the price trajectory of the metal has been subdued in recent months, the fundamentals behind the long-term trajectory suggest strong potential for long-term growth. Price doubling from 2014/2015 was first seen in China and is now being felt worldwide, with lithium hydroxide prices from $16-20 and carbonate prices from $12-14 thousand USD per ton.

There is no doubt as to the push that Tesla has given the current automotive transition to electric vehicles (EVs). As the company’s mission statement outlines, it hopes “to accelerate the advent of sustainable transport by bringing compelling mass market electric cars to market as soon as possible.”

However, since 2014, when Tesla first announced the Gigafactory with Panasonic, other manufacturers have begun to take notice and take action. Volkswagen AG announced last week that it was considering LG Chem Ltd. or Panasonic Corp. as partners for several US$2-billion factories, according to Bloomberg, with confirmation expected later in the year.

Previous announcements of billion-dollar investments in battery factories by Volkswagen were largely brushed off by investors as deflections from their ‘Dieselgate’ scandal. But with LG and Panasonic in the picture, concrete plans appear to be crystalizing.

Combined with Daimler putting US$550 million into tripling its battery production capacity in Germany, Nissan’s planned investments in the UK for its third generation Leaf, and GM’s joint venture with LG Chem to produce batteries in Holland, Michigan, for its Volt and Bolt, it is clear that auto manufactures are beginning to shift to electric—and in a very big way.

Given this new investment, plug-in electric vehicle (PEV) sales are expected to experience 62 Percent Year-over-Year Growth in 2016, 60% in 2017, and likely 100% in 2018. This translates into over 600,000 in PEV sales expected in 2018, creating a new level of demand for which the market will need two new lithium mines in operation to even begin to satiate.

“Looking at the full picture here, the future demand for lithium is truly staggering,” says Michael Kobler, CEO and director of American Lithium Corp., one of the ambitious new explorers shaking up the lithium mining scene in Nevada.

While future demand from the automotive industry is significant, the real game changer for the lithium industry may be electrical grid storage. Grid storage is designed on a variety of scales, each with a different price point. Already price-competitive with diesel fuel for stand-alone renewables and remote locations, home storage applications with devices like Tesla’s powerwall, and grid frequency modulation applications are now making major inroads in the grid storage market.

In some locations, grid-scale peaking applications have already been implemented, often in old coal power plants, re-using the building and grid connections.

Grid-scale storage battery demand can easily eclipse the need for automotive batteries. Battery experts note that although different battery chemistries exist, the energy density of lithium is far superior to other chemistries.

No new battery chemistry will supplant lithium in battery cathodes for decades, and lithium cathodes are the centerpiece of several leading chemistries which are already available.

Lithium mines are divided into two main types, with most resources currently coming from lithium brines.

Although commercial production of lithium from brine started after mineral production, it has proved to be more important economically; brine contribution to world production is twice that of minerals.

The concentration of lithium in most brines range 200 to 700 ppm. To compete with brines, mineral deposits have had many advanced technologies applied to reduce costs. However, brines can also benefit from technologies such as electro-dialysis, adsorption, and reverse osmosis to enrich or extract lithium in less time. Although lithium brine is often cheaper to develop than hard rock deposits, with the application of new technologies, brine processing can be sped up, and costs can be further reduced. 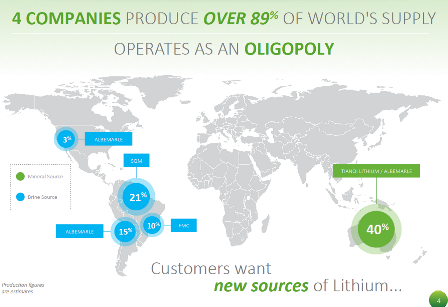 Up until two years ago, the so-called “big three – Albermarle (NYSE:ALB) in Chile and Nevada; SQM (NYSE:SQM) in Chile; FMC (NYSE:FMC) in Argentina – controlled 89% of the world’s lithium production. This group of lithium players has recently evolved into the “big five,” as Sichuan Tianqi and Ganfeng in China have become significant players.

At the start of this year, the de facto big five was still a reality, with FMC repeatedly stating that supply and demand are in line--an assessment akin to sticking its head in the sand, as lithium prices rise exponentially.

This also ignores fundamental production challenges within the “big five” itself.

Albermarle has had significant difficulties with its brine expansion that will most likely contribute to decreased production in 2016. In fact, SQM is the only “big 3” producer with a clear strategy for future growth, with partnerships such as its recent 50% acquisition of an Argentinian Lithium Americas Corporation property (TSX:LAC), which could prove to be successful years for down the road.

New Entrants: Where It Gets Really Interesting

In January 2016, the big five controlled 90% of the market, with no significant producers outside these sources. However, 2016 can be considered the year the lithium oligopoly came to an end.

Orocobre Limited is commissioning their Olaroz project in Argentina, and is currently at 68% of its 17,500 TPA full capacity. It aims to be at capacity in September. Though it has been shipping slightly sub-bar product, demand is so high that it has nonetheless been highly successful. General Mining and Galaxy Resources announced the commencement of production from the Mt Cattlin mine and processing operations and Galaxy are targeting nameplate production rates of 15,000 TPA of lithium carbonate by the end of 2016.

Apart from these two mines, no new developments are expected in 2016, though 2017 may bring further new entrants. A previously defunct mine, Quebec Lithium, has recently seen interest from a Chinese operator. Although uneconomical at 2014 prices, the current price doubling has made this an interesting property to be further developed. Another mine in Quebec, Nemaska Lithium (TSX:NMX), is being developed, though only 500 TPA are expected next year.

Where it gets the most interesting is with the new explorers, and this is where the lithium tide will turn.

The timing of the Orocobre and Galaxy developments have eased the price increases in the near term. This combined with the old adage “sell in May and walk away” for prospective companies have sent many juniors sideways or downwards since May. With the consistent long-term demand trajectory, two mines coming into operation provide a significant buying opportunity for those looking to enter the lithium market.

Lithium Explorers in the Spotlight

Although markets have been satiated by Orocobre and Galaxy for the summer, investors will be looking again in the early fall and now is the perfect time to enter before the next wave.

“Battery demand is rising at the rate of 1-2 new lithium mines per year, growing to 2-3 mines per year by 2020, and current demand will not only absorb all new mine developments in the pipeline, but will require fresh high quality deposits to be investigated for development,” says American Lithium’s Kobler. American Lithium raised capital in early May 2016 and bought prospective brine land in Nevada USA on a previously operating Boron mine in late May 2016.

Since the start of the year, the lithium industry has gained access to over $330 million in funding, whether from private placements, government grants, stock options, or other investment vehicles. The summer drilling season is upon us, and any lithium junior that doesn’t have a drilling program in place by this time is simply not worth looking at. Buying land in highly prospective areas is easy; completing a successful drill program with results takes more expertise.

The best strategy for exploration stage companies coming into this field is to:

- Raise capital for land purchases and drilling. The key for sustained growth during a capital raise is to limit share dilution.
- Seek out land that is highly prospective, either adjacent to operating mines, on previously operating mines, or in land that is analogous to existing development land.
- Prove to the markets that the management team is worthwhile through flawless execution of good land acquisitions, execution of drilling campaigns, with strategic drilling done to move forward into economic assessments

Nevada at the Epicentre of New Lithium Development

With Albermarle’s new mine in Nevada and Tesla’s forecast 2018 demand of between 25,000 and 35,000 TPA, the U.S. Southwest is becoming a new hotbed for the lithium industry.

Hoping to capitalize on the new lithium rush, juniors in Nevada alone have raised over US$60 million for exploration and delineation in 2016.

With two mines recently coming online and investors leaving the markets for the summer, a slight cooling off has been seen in the lithium realm. However, a keen investor will note that prices will start to move again with demand constantly increasing, and investors looking to enter the markets again in the fall.

Posted by M Reda on 07/21/16, 01:30 PM
The asteroid belt is a region of space between the orbits of Mars and Jupiter where most of the asteroids in our Solar System are found orbiting the Sun. The asteroid belt probably contains millions of asteroids. Do not worry about the source of Platinum ( makes the price of hydrogen fuel cell more expensive) and Lithium because NASA is expert in asteroid mining (the exploitation of raw materials from asteroids and other minor planets) and the computer modelling of NASA predicted an M-type asteroid that has a platinum core and a surface rich with Lithium sulphate. Said the Mr. Trump in his GOP nominating victory.