One challenge for perovskite commercialization is stability, as the light-sensitive material in these devices dissolves in the presence of water and decomposes at high temperature.

Are Perovskite Solar Cells in Our Future?

Perovskite may be the low-cost solution to solar cells. Solar panel installations on American homes generate about 85% of the electricity needed. Solar energy’s rapid growth is expected to continue for decades because of the demand for energy. A perovskite solar cell is a type of solar cell which includes a perovskite structured compound, most commonly a hybrid organic-inorganic lead or tin halide-based material as the light-harvesting active layer. Perovskite materials such as methylammonium lead halides are cheap to produce and simple to manufacture.

The Energy Information Administration (EIA) predicted that renewable energy sources such as solar and wind will supply roughly 50% of the new energy capacity in the U.S. in the next 25 years. Even with this growth, the power currently generated by photovoltaics is minimal.

Solar energy accounts for about 0.6% of the total amount of electricity generated, while coal and natural gas each provides 33% of the total. The balance comes from nuclear, hydropower, and other renewable energy sources. With the price of silicon photovoltaics coming down, solar energy is on the rise.

The name, perovskite solar cell, is a derivative from the ABX3 crystal structure of the absorber materials, which is referred to as perovskite structure. The most commonly studied perovskite absorber is methylammonium lead trihalide (CH3NH3PbX3, where X is a halogen atom such as iodine, bromine or chlorine), with an optical bandgap between 1.5 and 2.3 eV depending on halide content.

Perovskite solar cells have garnered more attention in the past few years than other types of emergent photovoltaic technologies. Unlike the other emerging technologies, which crept up over several years to the 10% efficiency range, perovskite solar-cell efficiencies soared in just a couple of years to more than 22% efficiency. Standard solar panels are 25% efficient.

Perovskite solar cells use compounds with the perovskite crystal structure and stoichiometry to absorb light. (CH3NH3) PbI3 is the most studied example. 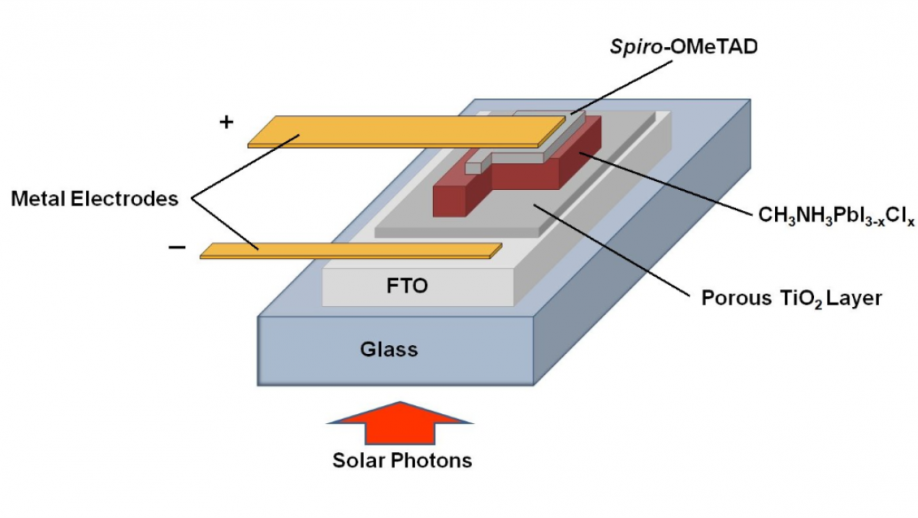 Scientists remain uncertain why positive and negative charges generated by photoexcitation in these types of cells reach their respective electrodes so efficiently. One challenge for perovskite commercialization is stability, as the light-sensitive material in these devices dissolves in the presence of water and decomposes at high temperature.

Perovskite solar cells have an advantage over traditional silicon solar cells because they are simple to process. Traditional silicon cells require expensive, multistep processes, conducted at high temperatures (>1000 °C) in a high vacuum in special clean room facilities. The perovskite material can be manufactured with simpler wet chemistry techniques in a traditional lab environment. Methylammonium and formamidinium lead trihalides have been created using a variety of solvent techniques and vapor deposition techniques, both of which have the potential to be scaled up with relative ease.

In a one-step processing solution, a lead halide and a methylammonium halide can be dissolved in a solvent and spin-coasted onto a substrate. Evaporation and convective self-assembly during spinning results in dense layers of crystallized perovskite material, due to the strong ionic interactions within the material.

Researchers at the University of Sheffield in the UK have created a spray-on solar cell that uses perovskite as the light-absorbing layer. Although the cell's efficiency is only a modest 11 percent, it can be manufactured very cheaply, paving the way for significant reductions in the cost of large-scale solar panel production. 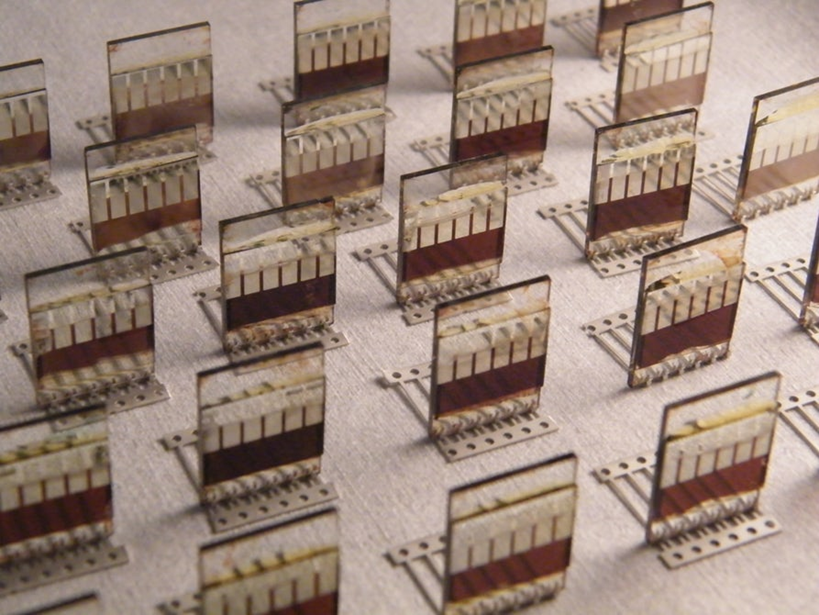 Price per watt, rather than efficiency is essential in large-scale production. When we talk about solar, this means trading off some performance in favor of much cheaper materials and easier, simplified manufacturing. Crystalline silicon PV modules have fallen from $76.67 per watt in 1977 to $0.40 - 0.50 per watt with reasonable efficiency in early 2015 (latest info).

Perovskite solar cell technology is in the early stages of commercialization compared with other mature solar technologies as there are several concerns remaining, such as stability, toxicity of lead in the most popular perovskite materials, and scaling-up.

Perovskite solar cells offer additional value, including flexibility, semi-transparency, tailored form factors, thin-film, light-weight, and low processing costs. These features are already set to eat away at much of the distinctiveness of its competing technologies.

In the near future, solar cells will be sprayed or printed onto the windows of skyscrapers and at prices far less expensive than today’s silicon-based panels. Perovskites are the disrupters in this market, harvesting light.

Perovskites, which can be mixed into liquid solutions and deposited on a range of surfaces, could play a crucial role in the expansion of solar energy applications with cells as efficient as those currently made with silicon. One British company aims to have a thin-film perovskite solar cell commercially available by the end of 2018.

There are several ways to make the films, but nearly all of them require heat. Perovskite precursor chemicals are dissolved into a solution, which is then coated onto a substrate. Heat is applied to remove the solvent, leaving the perovskite crystals to form in a film across the substrate.

A new method to create perovskite crystals involves a room-temperature solvent bath rather than the blast of heat used in current crystallization methods. A study published in the Royal Society of Chemistry's Journal of Materials Chemistry A shows that the technique produces high-quality crystalline films with precise control over thickness across large areas, and could point the way toward mass production methods for perovskite cells.

Several companies provide chemicals and materials for perovskite solar-cell R&D, but it seems that none has perovskite modules for sale. And, very few companies have demonstrated modules publicly. Saule Technologies claims to have a working prototype perovskite module that can power small electronic devices. Real commercialization of perovskite photovoltaics is unlikely to happen until around 2020.