Although it requires the hydrogen handling infrastructure to be set up, the use of fuel cell systems in reversing mode for alternating power storage and power generation within a unique system boundary is a readily available engineering solution to the issues currently connected with distributed energy management.

Republished with permission from the IEC e-tech blog:

A sense of collective responsibility is required to cope with the growing dependence on energy, given the fundamentally unpredictable nature of primary energy supply, the intermittent nature of renewable energy sources and changing energy consumption demands and patterns. The growing need for decentralized (local or remote, residential or commercial) power generation calls for systems that maximize small-scale electrical efficiency. Fuel cells (FCs) are ideal candidates for fulfilling this demand. In fact, at 60% proven net electrical efficiency for generators with a power output as low as 1 kWe, FC systems are head and shoulders above any other fuel conversion technology. If they are to succeed in being deployed widely, FCs for stationary applications should be able to use any locally available fuel. When and if production volumes manage to cover the extensive need for small-to-medium scale generation – which will also depend on the realization of anticipated reductions in cost – there is no reason why FCs should not also be used on the largest scales of power production. 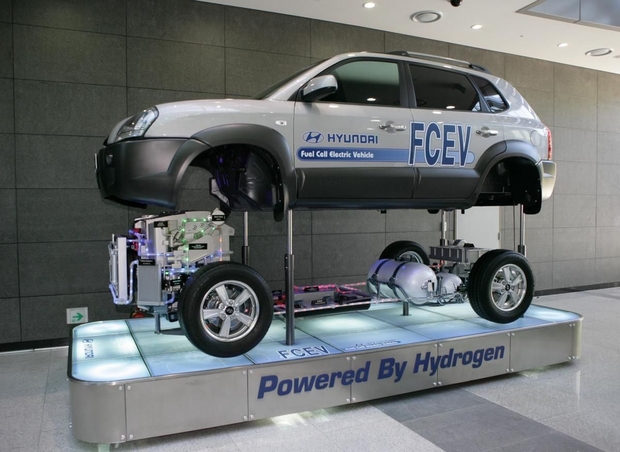 Fuel cells are being introduced in the automotive sector (Photo: Hyundai)

The growing penetration of wind power and solar photovoltaic farms is a positive consequence of government incentives and industries working together in a worldwide context. This has succeeded in bringing down the cost of the technologies and greatly increased their deployment. However, the implication of large volumes of power emanating from variable and intermittent renewable sources being fed into conventional grid structures is often the reason why the use of these forms of energy is curtailed in favour of grid stability. Smart grid solutions can only partially adapt electricity demand to these unpredictable patterns. In order to avoid installed capacity and clean primary energy going to waste, it is crucial to be able to store the electricity produced from these renewable sources. Using water electrolysis to produce hydrogen is a weight-efficient (compared to batteries) and location-flexible (compared to pumped hydro) method to convert and store surplus electricity.

Hydrogen can be converted back to power effectively in commercial, low-temperature FCs. It is particularly suited to mobile applications in fuel cell electric vehicles (FCEV), where the electricity that has been stored as hydrogen can add value by supplying energy for transportation.

Similarly, hydrogen is a highly valuable primary substance for the chemical industry, when used in conjunction with industrial processes to produce substances such as ammonia, chlorine and steel. It is also used in the refining of fossil fuels as well as in the food industry.

The electrochemical production of hydrogen has enormous potential for the profitable matching of large-scale renewable energy generation and economic development. Although it requires the hydrogen handling infrastructure to be set up, the use of fuel cell systems in reversing mode for alternating power storage and power generation within a unique system boundary is a readily available engineering solution to the issues currently connected with distributed energy management. Furthermore, the interesting prospect of using high-temperature, solid oxide cells which are capable of being operated directly as both power generators and power storing devices simply by inverting polarity, has prompted IEC Technical Committee (TC) 105: Fuel cell technologies, to look into the need for standardizing developments in this direction.

The present standardization work on FC and electrolysis operation does not yet cover reversing FCs. Similarly, systems designed to meet power storage and power generation needs within a unique solution – even if composed of separate FC and electrolysis modules – are not currently within the mantle of standardization. Given the potential of the application, this represents a promising area for standardization. A generic system approach is advisable (power in, power out, by-product heat and grid connections) for industry use. It should be noted that power-to-gas-to-power systems could combine different FC technologies for hydrogen and power generation, but a specific task on test procedure development for reversing FCs needs to be undertaken as this currently constitutes a gap in the standardization portfolio.

Across the world, industries are already demonstrating systems based on FCs for the reversing storage and generation of renewable power. In Japan, Toshiba has had a system for buffering solar PV in operation since April 2015 (polymer electrolyte membrane, or PEM, electrolyzer, hydrogen storage and PEMFC at throughputs of 1-2,5 m3/h of hydrogen). In Germany, Sunfire is developing reversing (or regenerative) solid oxide fuel cell (SOFC) systems of 10-500 kWe. In addition to these, FuelCell Energy is ramping up SOFC/SOEC (SOEC = solid oxide electrolyzer cell) installations for energy storage in the US and, in Italy, ElectroPower Systems has already deployed a significant number of PEM-based systems for remote, off grid, constant powering of telecom masts with PV hybridization.

The IEC is keeping abreast of this rapidly evolving scenario, and TC 105 has approved new work proposals for the development of International Standards on energy storage systems using FC modules in reverse mode. IEC TC 105 ad hoc Group (ahG) 6 will be responsible for this, encompassing the prenormative activities on the definition and validation of testing and characterization procedures of these modules being carried out in the European collaborative project SOCTESQA (Solid Oxide Cell and stack Testing and Quality Assurance, supported by the Fuel Cells and Hydrogen Joint Undertaking). The objective is to develop performance test methods for power storage and buffering systems based on electrochemical modules (combining electrolysis and fuel cells, in particular reversing fuel cells), taking into consideration the options of both re-electrification and substance (and heat) production for the sustainable integration of renewable energy sources.

The proposed Standards which are considered the most important and will come under IEC 62282-8 for Energy storage systems using fuel cell modules in reverse mode, are:

Target dates for the first Committee Drafts and finalized International Standards are the end of 2016 and mid-2019, respectively.