As power transformers at generation facilities near end-of-life cycles, a number of potentially dangerous events can come into play – in addition to untimely power outages and costly repairs.

Because many transformers are exposed to dust and high operating temperatures, over time they incur such problems as clogged air inlets, clogged cooling ducts, and deterioration of winding insulation, all of which can degrade capacity. If a transformer is operating under such conditions - particularly operating at or above its rated load - unexpected outages can occur.

Among the more catastrophic of those events are explosions, fires and meltdowns that result in immediate outages, plus risk of worker safety, fines, security lapses and community ire. Occasionally, such events occur because of failure of the transformer lightning arrester, or an inadequate fire protection system.

More often, problems due to end of life cycles for high-voltage transformers stem from transient overvoltage switching surges or surges due to degraded insulation of coil windings.

“Insulation breakdown often results due to high heat, which is one of the biggest enemies of power transformers, as well as over voltage and high current loads above the rated values,” says Alan Ober, Vice President Engineering and Manufacturing at transformer manufacturer and service provider ELSCO (Cincinnati, OH). “Over a 20-year period insulation can deteriorate to the point where the coil windings are exposed to moisture, dust - which leads to tracking, flashover to ground of the winding turns, and resulting short circuits.”

Such was the case at Avista Corporation’s Kettle Falls Generating Station in northeastern Washington State. Built in 1983, the Kettle Falls plant was the first utility-owned electric generating station of its kind in the U.S. constructed for the sole purpose of producing electricity from wood waste, or biomass, making it a major contributor to Avista becoming one of the greenest utilities in the country. 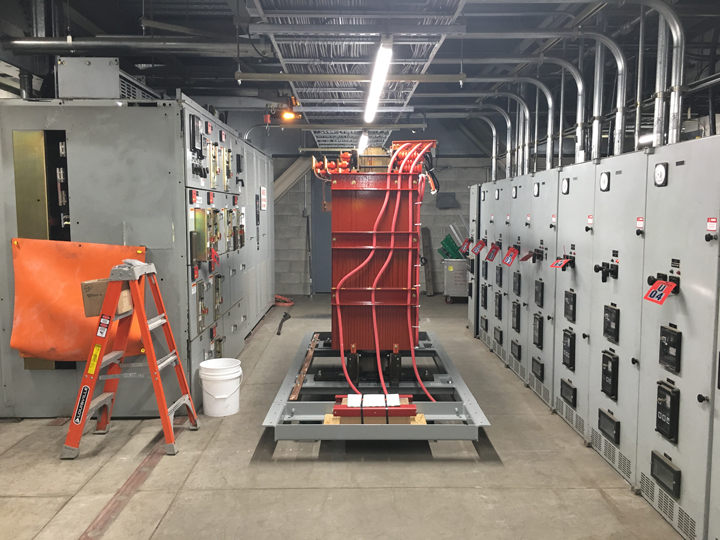 New transformer with enclosure removed being rolled down isle way to location.

It is these four transformers, enclosed in a dedicated room with switchgear, which came into question in 2015 during the station’s annual preventive maintenance outage. The insulation of the four transformers, each of them 35 years old, had already deteriorated to a concerning degree.

The power station decided to replace two of the units immediately, and replace the other two in the next year. Yet, there were concerns about being able to find a replacement manufacturer who could provide the Kettle Falls facility with units that were essentially identical with their aging ones, that would drop right into the same footprint and also hook up to the switchgear via the same connections, without requiring significant modifications.

After researching several prominent manufacturers the utility’s team decided on Electric Service Company (ELSCO) to design and build the replacement units as well as provide for any modifications that could enhance service life or performance.

Founded in 1912 by former Westinghouse engineers, ELSCO specializes in providing quality new, repaired and rebuilt transformers ratings range from 500 through 3750 kVA in 2.5, 5 and 15kV primary voltages, including both liquid-filled and dry-type models.

One of the major reasons the Kettle Falls station team chose this manufacturer was because of its abilities to design and build replacement transformers for older or outdated units, which often requires a certain amount of customization to fit the space available.

Nathan Sarber, General Forman of the Kettle Falls facility explains that not only was matching a tight transformer footprint a challenge, but also getting the replacement units in place was a strenuous task.