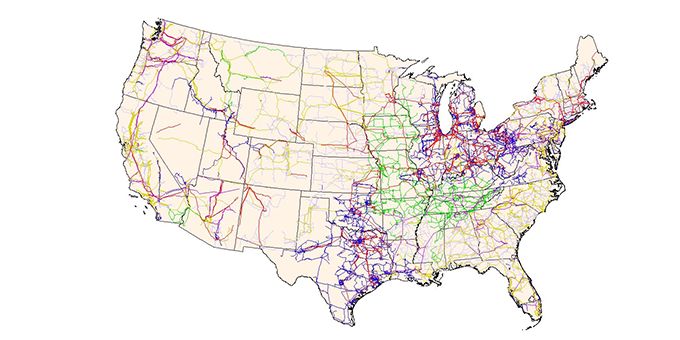 Major infrastructure projects like the Hoover Dam are proof that when great ideas come together with good policy and popular support, America can accomplish big things together.

Unfortunately, our electric grid is one place where we lack both the vision and the means to build better things. We refer to America's electricity infrastructure as "the grid," but we don't actually have a "national energy grid" at all — at least not the way other countries understand them.

That's a shame because there are many benefits for countries that invest in a national energy grid. Let's take a look at some of them.

How Can the U.S. Improve Its Energy Grid?

Instead of one contiguous grid to supply electricity to the entire country, the network in the U.S. is essentially made up of three huge pieces: the Texas, Eastern and Western Interconnections. Believe it or not, there are virtually no connections between them.

Energy analysts are unanimous: bigger electric grids are better than having multiple pieces. It's certainly true that America is a big and geographically diverse place. It's made sense for a while that our electric grid was parceled off into major regions.

But this doesn't have to be the case any longer — not when there are clear alternatives and a host of benefits for true grid unification.

Why Would a National Energy Grid Be Beneficial?

To put it one way, having a fragmented energy grid exposes a country to unnecessary risk. Smaller grids are more susceptible to supply and demand disruptions and the "troughs" and "peaks" that occur as a result. Having more generation facilities and more homes connected increases efficient power flow and provides redundancy, not to mention peace of mind.

But apart from the engineering and practical problems a more unified — a more "social"? — energy grid represents, we also stand to benefit from an environmental perspective. It's unlikely that the U.S. or any other carbon-conscious country could feasibly meet its climate goals without a serious effort to build a national energy transmission grid.

How do we know? It's not just supposition. The recently published "Interconnections Seam Study" by Iowa State University — plus some help from analysts and technicians from energy and utility companies — wanted to know more about the merits of a national grid system. Here's what they found.

A Decades-Old Idea Whose Time Has Come

Iowa State cited some studies from as far back as 1923 to explore the case for a national grid. That's how long we've been kicking this idea around.

Part of the reason is because anxiety is heightening in virtually every scientific and technical field over the unpredictability of the earth's climate and weather systems. As Puerto Rico tragically demonstrated, few countries are prepared for worst-case storms with truly resilient infrastructure. New technologies and a united energy infrastructure could improve power flow efficiency, redundancy and resiliency during and after extreme heat or other weather events.

Another reason we're talking more about this now is because the technology has simply caught up to the original vision. The energy grid of the future will need to rely on artificial intelligence to make distribution calculations, often during emergency situations to help stop blackouts from spreading. This sort of tech has finally progressed to the point where we can begin implementing it — but it will provide the most dramatic results over larger service areas.

Clean energy is another obvious reason why the time is right to build a national grid. Decarbonization of this country means electrifying our homes and businesses and weaning ourselves off fossil fuels — yesterday. A national electric grid is a crucial step this country must take if it wants to chase down the elusive 100 percent renewable energy target other countries have already set — and in some cases achieved.

What's Needed to Get This Idea Off the Ground?

Several distinct designs have arisen from our studies of this problem and how best to solve it. One plan would add HVDC — high-voltage, direct current — lines to bridge the "seams" between the three Interconnects. Another would reimagine the entire apparatus and rebuild the whole grid with HVDC lines, from coast to coast.

Naturally, the question is how we pay for it — no matter which design we ultimately decide upon.

Carbon taxes are some of the most popular and straightforward solutions for reconciling the appetites of capitalism with the needs of our warming planet. Some of the models run by the researchers on the cost-benefits of a national grid assumed a $40/ton carbon tax policy by 2038. A revenue stream like that could easily be rolled into a project of this scale.

What Do We Have to Lose?

The researchers have been clear on three points:

In other words, there's virtually no downside to this project, no matter how engineers ultimately decide to go about building it. What remains is whether America has the political will. We invoked the Hoover Dam earlier because, if you've ever visited, there's about a 75 percent chance you heard somebody say America "doesn't build things like this anymore" during your tour.

But that doesn't have to be true. It's clear we're ready for another big idea. Whether it's saving every electricity customer money or hardening our infrastructure against climate change, it's hard to imagine another project right now that looks as appealing, practical and unifying as developing a national energy grid.