When you watch a wave crashing onto the beach, it’s a culmination of energy collected over the entire ocean’s surface. 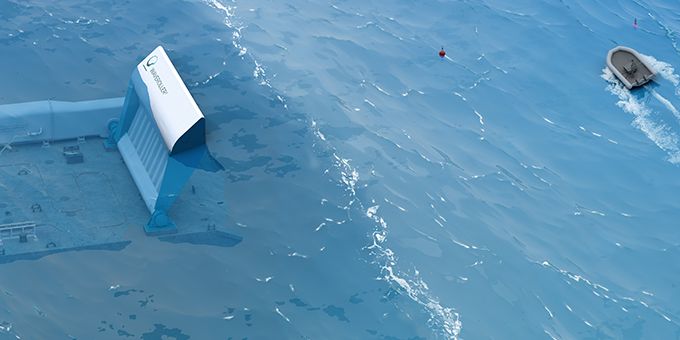 Let’s start with an overview of wave energy

Wave energy is one of the largest untapped renewable energy resources on the planet. As the sun heats the ocean’s surface, weather patterns are created that generate winds that create ocean waves. The ocean waves can be easily seen on the surface, but what’s not so easily observed is the water particle motion that extends down below the surface. For long swell waves that travel great distances this motion can extend over 100m below the surface. Once the waves are generated they radiate out and travel great distances before crashing onto the shoreline. Thus, when you watch a wave crashing onto the beach, it’s a culmination of energy collected over the entire ocean’s surface. When the sun goes down and the wind stops blowing the waves continue to barrel into the coast. Thus, you could imagine that the ocean is both our planets largest solar panel and battery, combined. Wave energy is concentrated.  For example, in California the average wave energy over the year is roughly 600kWh per meter per day, whereas the solar resource in California is 4 to 8 kWh/m2/day.

There are already several mature renewable energy technologies on the market, such as solar and wind, so what value can wave energy bring to the energy system?

The greatest value from wave energy comes from the predictability of the resource (days and up to a week in tropical oceans) and the phase difference with wind and solar energy. The phase difference can be seen on both the seasonal level and the daily level. For example, in California the solar and wind energy peaks in the summer, whereas the wave energy is strongest in the winter. When the sun goes down the wind also often decreases, but the waves continue to barrel in.

For an electricity market where wind and solar are the predominant forms of renewable energy generation, as the proportion increases we can expect the value of the electricity generated by them to decrease. In the case of wind energy, on a windy day, all the turbines are producing well and in a sense competing with each other. Each additional wind turbine installed increases the supply on a windy day and has a negative impact on market price. However, if instead of building a wind turbine the cash was used to exploit a resource that’s out of phase with wind and solar, such as wave energy, the generated electricity has a greater value and price.

How does WaveRoller technology achieve this?

WaveRoller consists of a panel that is hinged at the seabed in water depths of about 10-15m that sways back and forth in the swell, moving with the water. This motion is then used to generate electricity within our power take off and is sent ashore via a subsea cable. As the panel is hinged at the seabed there are no mooring systems, chain cables or other equipment hindering its motion. Thus the device is efficient and sensitive to small waves; it will generate electricity from wave heights under one metre. 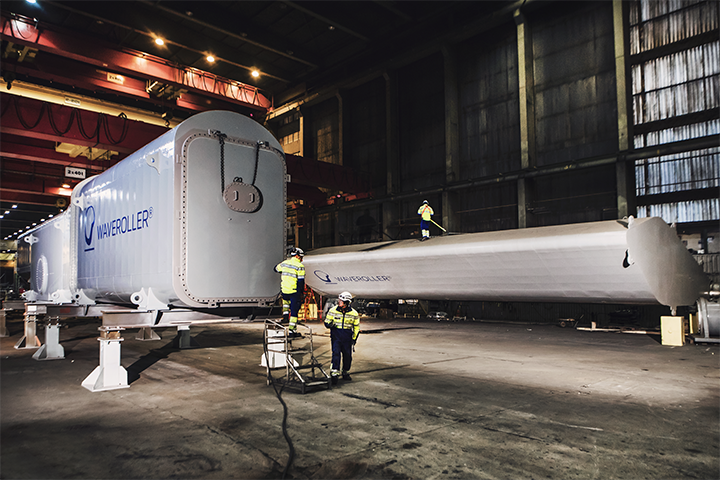 At what stage of development is WaveRoller? When do you foresee installing the first working system?

WaveRoller technology has already been installed at a test site in Peniche, Portugal, where we installed our grid-connected EU FP7 funded project. That was used as a test bed for sea trials to test different materials, paints, control strategies etc.

These deployments were also used to validate the two most important aspects of the technology; the power production and the structural design. For the power production validation DNV GL (www.dnvgl.com) took the measured waves, power delivered to the grid and our predictions and confirmed that the predictions were inline with expectations. Thus, both the technology was working as expected and numerical methods that were used to model the performance were validated. (http://aw-energy.com/news/waveroller-obtains-external-performance-verification-dnv-gl/)

The structural design methodology validation involved instrumenting the panel with strain gauges and accelerometers to determine the pressure distribution produced by sea states with different heights, periods and headings. These results were then compared with the results of a numerical model in order to validate the model and determine appropriate design safety factors. This was a much more complex challenge, carried out with the support of consultants from DNV GL and independently verified Lloyd’s Register (www.lr.org).

Thus a working system has already been installed and tested whilst feeding electricity to the grid. The project was a great success as the main objectives were the two validation steps, described above, needed to form the foundation of third party certification. We also have another device we have designed and manufactured in order to receive third party certification from LR to meet the insurability criteria for project finance. That device recently received a manufacturing certificate from LR.

The sea is a tough environment, how have you met the challenges?

There are several characteristics of WaveRoller that are suited to this tough environment. From the device perspective, the panel is free to move around the hinge. As pressure from the large wave builds up on one side, the panel swings over and sheds the load - so in some senses the panel sheds the excess load like a safety valve. Being submerged the panel is further from the violent air water interface.  The absence of mooring cables means that no allowance is needed to accommodate extreme wave heights.

To ensure that we meet the challenge from the outset, we use a similar approach as tried and tested in the offshore oil and gas industry: the multiple barriers before failure. Firstly, we have an experienced and highly skilled team and network. Then we use a rigorous design approach (all design decisions have a pedigree back to either testing, or recognized codes and standards). Thirdly, we engage third parties to scrutinize the design to ensure that the specified design requirement and codes and standards are appropriate, and then that the device has been designed and manufactured according to the requirements

Are there local geological configurations that are necessary for the WaveRoller to be feasible?

Our foundation solution has been designed for both rock and sandy seabed – the most common at the deployment depth. The most important is a long unobstructed fetch of an ocean.

An advantage of mature renewable energy generation technology is the high confidence in the return on investment. What have you done to address this?

For new technology there is the concern that the technology will breakdown, and thus will not generate revenues during the repair period. For some customers, building small projects, they may choose to carry this risk. But for large projects, financed by loans, then the risk can have a significant impact on the financing and thus operating costs. Thus, to alleviate this, the risk can also be placed with the insurance market. For insurance companies to carry the risk, comprehensive third party scrutiny of the technology and project is required to demonstrate that the asset has been adequately designed and manufactured and complies with best engineering practice, for example recognised codes and standards. This is an area that we’ve spent the past 5 years concentrating on and have invested millions on areas such as testing grid connected devices at sea fitted out with sensors, and accelerated life cycle testing of the power take off unit on our full scale test bench. As a result of this effort our WaveRoller project has received several certification milestones, the latest being a manufacturing certificate issued by Lloyd’s Register. This meets the criteria of the insurance market and thus efficient financing

How do you expect the market for wave energy to develop? For example, California has committed to substantially reduce their dependence on fossil fuels

California is a good example. On the face of it the state has an excellent solar and wind resource. But the challenge is that the solar and wind energy peak in the summer months and fall a lot in the winter. In order to fill the seasonality gap either a huge amount of long term storage is needed or a renewable energy resource that is out of phase with wind and solar. In the case of seasonal storage the quantities of equipment and materials for any solution currently in development appear to be huge. On the other hand there is already an enormous battery just to the west that delivers energy out of phase with wind and solar. In the winter when wind and solar are at their weakest, wave energy peaks. With wind, solar and wave in the mix the 100 percent renewables challenge is much more do-able – as well as generating tens to hundreds of thousands of new skilled jobs.

About Christopher Ridgewell, CEO of AW-Energy
Chris joined AW-Energy in 2014 as CTO and was promoted to CEO in 2018. He has almost 30 years of professional experience working with marine technology. Mostly in the safe implementation of new technologies, from LNG Carriers, FLNG and LNG fuelled ships to passenger ships, submersibles and novel 3D design. He left the UK in ’92 and has worked extensively with both technology and business development in across Europe and Asia. He is also a Fellow of the IMarEST.