Those who can afford it are looking to personal solar photovoltaic systems to help them survive periods of load shedding – the deliberate, scheduled halting of power across entire areas of the country to minimise the pressure on the grid. 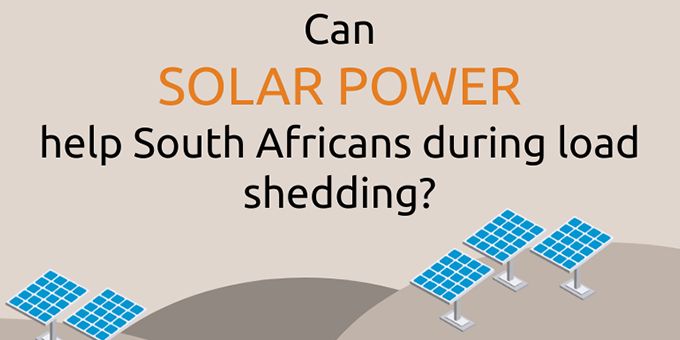 South Africa is in the midst of an energy crisis. As state energy provider Eskom continues to buckle following claims of corruption earlier this year, many South Africans are looking beyond the grid to try and keep the power on. In addition to corruption claims by political opponents, Eskom has also suffered serious mismanagement, leaving many South African power plants in desperate need of renovation.

As the energy demand on the grid rises, these outdated storage facilities mean the transportation and supply of energy across the country is continually weakening. Those who can afford it are looking to personal solar photovoltaic systems to help them survive periods of load shedding – the deliberate, scheduled halting of power across entire areas of the country to minimise the pressure on the grid.

Load shedding was at its worst in April and May this year as Eskom enforced stage four load shedding, where the power was out for a total of 48 hours across an 8 day period for a maximum of four hours at a time. Businesses, public organisations and homes were regularly crippled by these blackouts as the South African state desperately tried to recover from events such as a cyclone in Mozambique which halted coal supply and left the state in even greater need.

Eskom has promised that load shedding will not be necessary over the winter but the blackouts could return should anything else upset the delicate balance the provider has had to find while it works on repair and reorganisation.

For those South Africans planning how they will survive load shedding, solar power systems would be a logical way to go – South Africa receives a stable amount of sun all year round, meaning a personal solar panel would be able to produce around 2 kWh in 8 hours of sunlight. This would allow the user to shift some of their dependence from the grid.

To store the full 48 hours’ worth of energy and keep the power on throughout the entire load shedding cycle, the average South African would need 16 of these Enertec batteries, showing the limitations in generation and storing of energy through solar panels alone.

Additionally, the average daily energy usage in South Africa is 10 kWh per person, meaning to generate enough energy to keep off the grid for a full day each person would need five residential solar panels absorbing energy all day. Although solar power systems are a useful way for an individual to offset their dependence of the grid, this isn’t a practical way of managing the intense pressure on the national grid.

For South Africa to properly support the energy needs of its citizens and move away from their high dependence on coal, Eskom first needs to reorganise the business to recover from the mismanagement and corruption of past individuals and then introduce much larger-scale renewable projects which help the storage and transmission of energy as well as reduce overall pollution from the current coal-driven system.