When you place a zinc anode and a copper cathode in a container of wet mud, the two metals start reacting, because zinc loses electrons easier than copper and because the mud contains ions. By wetting the dirt, it turns into a true electrolyte solution. 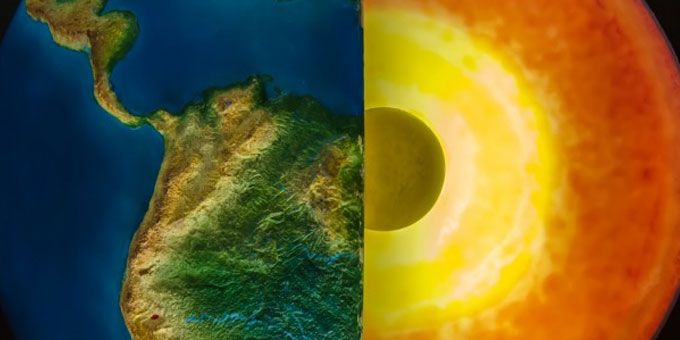 Using the Earth as a Battery

In 1841, Alexander Bain confirmed the capacity of moist dirt in the generating of electricity. An Earth Battery is a pair of electrodes, consisting of two dissimilar metals, using moist earth as an electrolyte. To make the battery, Bain buried plates of zinc (anode) and copper (cathode) in the ground about a yard apart. It produced an output voltage of approximately 1 volt.

When you place a zinc anode and a copper cathode in a container of wet mud, the two metals start reacting, because zinc loses electrons easier than copper and because the mud contains ions. By wetting the dirt, it turns into a true electrolyte solution. Therefore, the electrodes start exchanging electrons, just like an ordinary battery does.

If the electrodes were touching, they would generate a lot of heat when they react; but since the soil separates them, the free electrons must travel through the wire that connects the two metals. If a LED is connected to the completed circuit, you've got a soil lamp.

To get natural electricity, researchers would drive two metal plates into the ground in the direction of a magnetic meridian, or astronomical meridian. The stronger currents flow from south to north. This occurrence influences a significant uniformity of current strength and voltage. As the Earth currents flow from south to north, electrodes are positioned, beginning in the south and ending in the north. In many early on experiments, the cost was exorbitant because of the extreme spacing between electrodes.

The voltage level was discovered to increase linearly by joining several earth battery cells in series like a commercial lead acid battery. The load current increased by connecting earth cells in parallel. The source current capacities were also discovered to increase by adding to the surface areas of the electrodes except that single cell voltage remained constant irrespective of the electrode sizes.

Since all of the common metals behave in the same way, the two spaced electrodes, have a load in an external circuit between them.  They are prepared in an electrical medium, and as energy is imparted to the medium, free electrons in the medium are excited. The free electrons then flow to one electrode to a greater degree than to the other electrode, thereby causing electric current to flow in the external circuit through the load.

The current flows from that plate whose position in the electro potential series is near the negative end. The current produced peaks when the two metals are most widely separated from each other in the electro potential series, and when the material closer the positive end is to the north, while that at the negative end is in the direction of the south. The plates, one copper and another iron or carbon, are joined above ground by means of a wire producing not much of a resistance. In this arrangement, the electrodes are not significantly chemically corroded, even when they are in the earth flooded with water, and are connected by a wire for a long time.

The downside is that the procedure won't continue forever.  Eventually, the dirt would become depleted of its electrolyte qualities, but replacing the soil would restart the process.

Another source, microbial batteries, or microbial fuel cells, has been around, but their power output is so low they have minimal usage to run a light, charge a cell phone, calculator, electronic watches, baby toys and white light LEDs, as they have minimal energy requirements. 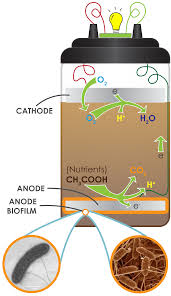 This device consists of a graphite cloth (the anode) placed in the bottom of a container, buried with soil and a section of chicken wire (the cathode). Electrons are produced when the microbes eat the waste in the soil. These electrons travel through the bacteria network from the graphite-cloth anode through the conductive wire to get to the chicken-wire cathode. A LED light, connected to the circuit, lights up as the current flows through the circuit.

A startup company, Lebone Solutions from Harvard, estimates that a fuel cell measuring 10.7 square feet would produce 1 watt, which could charge a cell phone; an area of 53.8 square feet could power a lamp or a fan. In most of the world, a microbial fuel cell would not be an effective power supply. In rural Africa, where there's no power grid, this arrangement could make the difference in walking miles to charge a phone. Lebone is presently initiating the fuel cell for use in several rural African villages. When watered, the buried cells can run for months.

The Earth is not composed of identical stuff.  The heavy elements, like iron, lead and gold, descended into the hot interior, while the lighter elements, such as oxygen and hydrogen, have risen to the cold surface.  When the heavy and light elements come together, they react.

Each group of elements reacts in their own precise way. The heavy elements give up electrons, while the lighter elements collect them. This is our earth battery. The rocks in the earth’s mantle acts like one electrode, and the water acts as a second.  When there is a fracture in the earth’s crust, hot rock contacts with the water, and the electrons leap from one to the other. When electrons are in contact with water, hydrogen forms.

If there is a sufficient supply of cold water and hot rock, it provides a big enough battery to power life for thousands, millions, or even billions of years. The heat from the Earth’s interior disperses quickly, and can’t be stored.  The electrons react with water molecules to produce hydrogen. Hydrogen is nature’s battery. The process usefully transports the energy from the earth’s core to the surface, where it can be consumed. Microbes evolved to release this energy in a controlled way, flowing into the right parts of the cell to sustain life. When scientists discuss water as being unique and essential for life, this is why.  The meandering rocks that provide food for microbes are quite common in the universe. They have been discovered on asteroids and on Mars.