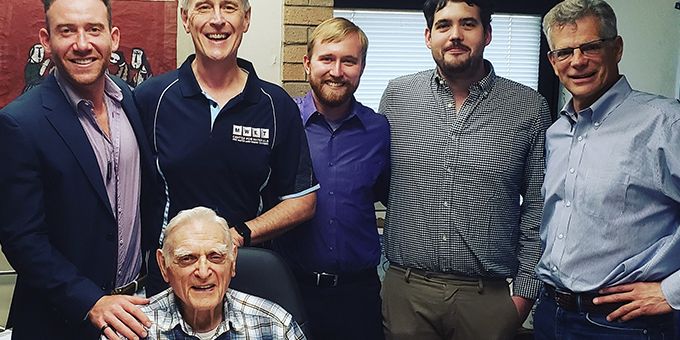 At the ripe age of 98, Dr. John Goodenough, professor in the Cockrell School of Engineering at The University of Texas at Austin (UT) and inventor of the lithium-ion battery, is looking towards future energy storage solutions through a newly launched partnership with Energy Exploration Technologies (EnergyX). Earlier this year, Goodenough, along with several members of his lab at UT, started working with EnergyX, a young energy technology company founded by entrepreneur Teague Egan and with labs near Silicon Valley, in an effort to radically rethink the approach to energy storage.

As the recipient of the 2019 Nobel Prize in Chemistry, Dr. Goodenough's pioneering work on the lithium-ion battery led to a revolution in portable electronic devices. While heading the Inorganic Chemistry Laboratory at Oxford University nearly 40 years ago, he discovered the feasibility of lithium cobalt oxide as a cathode material, which enabled the commercialization of the first rechargeable lithium-ion battery by the Sony Corporation.

Lithium-ion batteries are used in nearly every smartphone, laptop computer, and in billions of cameras and power tools. They are the driving force behind electric vehicles (EVs) which require 10,000x more energy storage than one iPhone. The EV revolution is driving the demand for lithium and other battery materials. Globally, the EV market is forecast to see exponential growth in the coming years. IEA predicts there could be as many as 250 million EV's on the road by 2030. However, there are still significant barriers to be addressed. Most importantly, battery costs need to be reduced, and their efficiency and life-span need to be improved.

"Through cutting-edge innovation, EnergyX is working to solve these problems and is driving the growth of the global lithium industry while making low-carbon technology cheaper and more accessible," explains Egan who was recently likened to Elon Musk of Tesla by the BBC. "The setup we have at The University of Texas is great. We make the materials in Dr. Freeman's lab, then take them next door to Dr. Goodenough's lab to test them in batteries. Our goal is to adapting our core LiTAS™ nanotechnology as a solid-state electrolyte."

Today the collaboration between the Goodenough's lab at UT and EnergyX is meant to explore solid-state battery research and development. Back in May 2019, EnergyX executed a landmark licensing deal with UT for the worldwide exclusive rights to a large portfolio of intellectual property surrounding a new class of "miracle materials" called Metal Organic Frameworks and Mixed Matrix Membranes. Under the licensing agreement, EnergyX committed significant sponsored research funding to UT, part of which will go to fund Goodenough's lab to tailor these materials for solid-state batteries.

Teague Egan, CEO of EnergyX, commented on the collaboration by saying: "It is truly an honor to be working with Dr. Goodenough and his group at UT. He is a legend in our industry and I am in awe of his accomplishments. I don't know anyone else who is 97 years old, much less 80 years old, still working day in and day out to further his field. His experience and knowledge of the industry is unmatched."

Solid-state batteries are a transformational extension of lithium-ion batteries capable of 10x higher energy density because they allow the use of a pure lithium metal anode. With further development they can outperform conventional rechargeable batteries by 500% or more in terms of energy density with significantly higher voltage. From a consumer perspective, the key benefits of stable solid-state battery technology is mainly more energy per charge, meaning that devices can last much longer or cars can go much further without having to be recharged. They also allow up to six times faster charging, and much longer cycle life by many years.

An equally important player in the EnergyX / UT collaboration is Dr. Benny Freeman, professor in UT's Cockrell School of Engineering and director UT's Center for Materials in Water and Energy Systems (M-WET). Dr. Freeman's lab initially developed the groundbreaking membrane technology and subsequent intellectual property that acts as the battery electrolyte. Professor Freeman, who also sits as chairman of EnergyX's Science Advisory Board, as well as his group of PhD's, and Goodenough's lab are working in close collaboration and proximity with EnergyX to develop new solid-state electrolytes. "We are very excited to embark on this important research partnership with EnergyX to further expand the knowledge base underpinning EnergyX's technology," said Dr. Freeman.

In addition to Dr. Freeman, EnergyX has assembled an advisory board including Bob Galyen, the CTO of the world's largest battery manufacturer, CATL, the former CEO of GE Energy Storage, Rob Morgan, and the co-chair of energy at Singularity University, Ramez Naam. On the heels of their recently announced partnership with Orocobre, a top 5 lithium producer worldwide, EnergyX is also focused on the abundant, cost effective production of lithium, the main battery material, using their core LiTAS™ technology.

Though Dr. Goodenough is the oldest person to receive a Nobel Prize, he remains active in research to this day. The big advantage of his original lithium-ion technology was that it stored about 10 times as much energy as lead-acid or 5 times as much as nickel-cadmium. "The world has changed dramatically in the 40 years since Dr. Goodenough discovered his revolutionary technology. The original Li-ion battery has brought a lot of technological innovation with it, but still leaves much to be desired," stated Nick Grundish, Director of Battery Design at EnergyX and Dr. Goodenough's last PhD candidate. "We are working to disrupt the energy storage sector yet again and provide a pathway for the eventual elimination of fossil fuels. Dr. Goodenough's support and wealth of knowledge is vital to achieving that mission."

Grundish is leading the way with preliminary testing of the LiTAS™ nanoparticles in solid-state mixed-matrix polymers. The team is testing a variety of battery compositions including lithium-ion, lithium/sulphur, and sodium-ion based batteries.

Engineers working on renewable energy grids are starting to turn to lithium battery storage systems. By storing electricity generated when sunlight and wind are at their peak, lithium-ion batteries can reduce dependence on fossil fuel energy sources and help lessen the impact of climate change. Energy storage, most often using lithium-ion battery technology, is widely seen as necessary for transforming the electric grid to a carbon-free system and combating the effects of climate change. Most electricity in the United States — and in many other parts of the world — still currently come from fossil fuel sources, predominantly natural gas, but also coal.