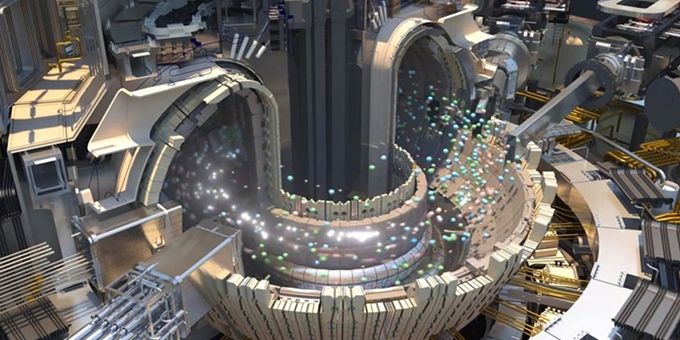 The original name is The International Thermonuclear Experimental Reactor (ITER). It is an international nuclear fusion research and engineering megaproject. This will be the world's largest magnetic confinement plasma physics experiment. The goal of ITER is to establish technological feasibility of fusion energy for peaceful use, and to strengthen the global nuclear fusion industry.

Thousands of engineers and scientists are contributing to the design of ITER.  The members of ITER are China, the European Union, India, Japan, South Korea, Russia and the United States. They are participating in a 35-year collaboration to build and operate the ITER experimental device, and working together, bring fusion to the point where a demonstration fusion reactor can be designed. Their goal is to reproduce on Earth the boundless energy that fuels the Sun and the stars.

Fusion is the nuclear reaction that powers the Sun and the stars. It is a possible resource for safe, non-carbon emitting and essentially limitless energy. Exploiting fusion's power is the goal of ITER.

ITER is a new tokamak nuclear fusion reactor that is being built next to the Cadarache facility in southern France.

A tokamak nuclear fusion reactor is a machine, which utilizes a strong magnetic field to confine hot plasma in the shape of a torus. The tokamak is one of several types of magnetic confinement devices being built to produce controlled thermonuclear fusion power.

When heated to fusion temperatures, the electrons in atoms separate, causing a fluid of nuclei and electrons known as a plasma. A plasma is electrically conductive, and is able to be controlled by electrical or magnetic fields. As the particles are moving at high speed, their subsequent tracks look like a helix. If a magnetic field is arranged so that the lines of force are parallel and close together, the particles orbiting adjacent tracks may collide, and fuse.

This can be created in a solenoid, where a cylinder with magnets is wrapped around the outside. The collective fields of the magnets produce a set of parallel magnetic lines, which run down the length of the cylinder. Because of this arrangement, the particles run out the end, but are prevented from moving sideways to the wall of the cylinder.

By bending the cylinder into a donut shape, or torus, so that the lines form a series of continual rings, the particles circle endlessly.

In an operating fusion reactor, part of the energy generated will need to be used to sustain the plasma temperature as fresh deuterium and tritium are introduced. During the startup of a reactor, or after a temporary shutdown, the plasma will need to be heated to its operating temperature of over 100 million degrees Celsius (the sun is 15 million degrees Celsius). In order to maintain the plasma temperature, continuous external heating must be supplied. Chinese researchers set up the Experimental Advanced Superconducting Tokamak in 2006 which is able to sustain 100-million-degree Celsius plasma, which is required to commence the fusion between hydrogen atoms.

Over 62,000 miles of niobium-tin superconducting strands are necessary for ITER's toroidal field magnets. Over 400 tons of this multifilament wire has been produced for ITER at a rate of about 150 tons a year. Stretched end to end, the niobium-tin strand produced for ITER would wrap around the Earth at the equator twice.

The heaviest components of the ITER machine will be shipped to the nearest Mediterranean port and then transported along 65 miles of an expressly modified roadway. The dimensions of the components are extraordinary with the heaviest weighing almost 900 tons. The largest component will be approximately four stories high.

The metal contained in the Eiffel Tower weighs 7,300 tons. The ITER Tokamak will weigh as much as three Eiffel Towers. There will be roughly one million components that will make-up this complex machine.

The ITER central solenoid weighs 1,000-tons and it is strong enough to contain a force comparable to twice the thrust of the Space Shuttle at take-off—6,000 tons of force.

The lower basement of the Tokamak Complex will hold 400,000 tons, including the buildings, the 23,000-ton machine and equipment. That's more than the weight of New York's Empire State Building.

The main feature of the 445-acre ITER site, is a man-made level platform that was completed in 2009. This platform is equivalent to 60 soccer fields. 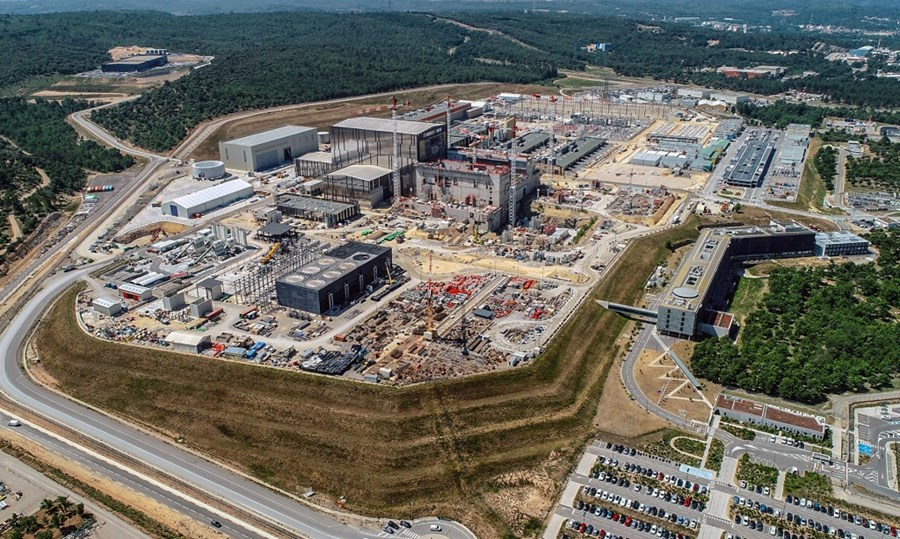 ITER has been planned for high fusion power gain. For every 50 MW of power inserted into the Tokamak through the systems that heat the plasma, it will produce 500 MW of fusion power for periods of 400 to 600 seconds. The current record for fusion power gain in a tokamak is held by the European JET facility in Culham, UK, which produced 16 MW of thermal fusion power for 24 MW of injected heating power.

ITER's undertaking is to validate the viability of fusion power, and to prove that it can work without negative effects. The project’s goals are to produce a fusion plasma with thermal power ten times greater than the infused thermal power. The project wants to produce a continuous plasma with a Q value greater than 5. (Q = 1 is scientific breakeven.) It wants to build up technologies and methods needed for a fusion power station, which uses robots for remote maintenance.

The objectives of the ITER project are not limited to devising a nuclear fusion device but much broader goals, which includes building the necessary technical, organizational and logistical capabilities, enabling management of such megaprojects among participating countries.

The project’s schedule is to create the first “small star” inside of the ITER tokamak, known as First Plasma by 2025, and then to start the Deuterium-Tritium Operation in 2035.