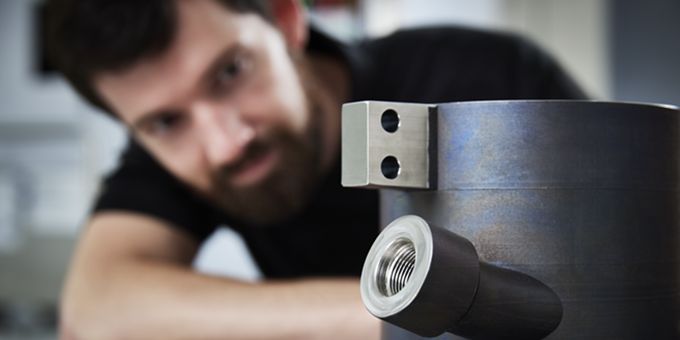 If you’re an experienced R&D engineer and you form a company with “innovative” in the name, you’d better be ready to deliver novel, creative solutions to real-world challenges. Mohawk Innovative Technology, Inc. (MITI) co-founders Jim Walton, M.E., and Hooshang Heshmat, Ph.D., merged their aerospace and metallurgical expertise in 1994 with exactly that in mind, and have run a thriving design-engineering business ever since. 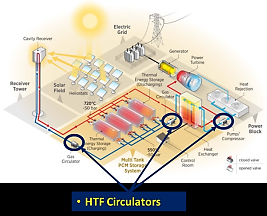 Diagram of a Concentrated Solar Power (CSP) system, with Heat Transfer Circulators (HTF) that would include compressor housings similar to the one designed by Mohawk Innovative Technology for the U.S. Department of Energy Office of Energy Efficiency and Renewable Energy (EERE) under the Solar Energy Technology Office (SETO) Award Number DE‐EE0008374.  Image credit: DOE

Perhaps not surprisingly, Mohawk’s engineers were early enthusiasts regarding the potential benefits of additive manufacturing (AM, aka 3D printing). But a metal-AM system they tried several years back couldn’t deliver the robustness and quality they needed for an advanced heat-exchanger design. That machine required a lot of internal support structures to print the component, and produced a rougher finish that caused too much of a tradeoff between pressure drop versus heat exchange. So the team continued successfully fulfilling contracts using more conventional manufacturing methods.

Then in early 2020, Mohawk had a novel idea for a critical component in a concentrated solar power (CSP) system project, sponsored by the DOE, that made them take another look at 3D printing.

Mohawk had already worked with the DOE on several projects related to alternative energy production by that time. “We really want to do things that are environmentally friendly for the good of society,” says Walton. Using their oil-free bearing technology, they had developed a cast-metal centrifugal compressor for a “clean-tech” hydrogen transport system that replaced three pumps with just one that was much more durable. “Quite a few people doubted we could do it, but we said, ‘look, you’ve got to use space-age technology for this—don’t think old and big, think small and fast,’” says Walton. “When they saw what we’d designed, they changed their minds.”

With their hydrogen-pump success in hand, Mohawk qualified for another DOE project based on the use of supercritical CO2 (s-CO2) with the rotating machinery used to generate electricity inside a concentrated solar power facility. CSP systems use mirrors to reflect and concentrate sunlight onto a single point where it’s collected and converted into thermal energy (in the form of superheated CO2) used to produce electricity.

Under extremely high pressures, s-CO2 has the density of a liquid but the viscosity of a gas. This makes it an ideal conduit for heat and energy, delivering far more power than steam. It is also amenable to being compressed and then passed through heat exchangers and channeled to tanks to be stored for peak-hour power needs. However, CSP systems are not yet cost-competitive with conventional power generation. The DOE is aiming to bring their costs down to a Levelized Cost of Electricity (LCOE) of 5 cents per kilowatt hour, and its Solar Energy Technology Office funds R&D that is targeted at achieving that goal.

“Our goal is to help reduce the cost of the machinery and make such plants more cost-effective,” says Walton. “A single compressor for a 100-megawatt CSP system can run $7 to 20 million—so there’s a real opportunity for design innovation to support alternative energy by getting as much cost out as possible. This is where our core competency of oil-free bearings was a great fit because oil is reactive with s-CO2, and causes corrosion. When the DOE started looking for ways to address the challenges of s-CO2 in concentrated solar power plants, we knew we could provide some answers.” They began designing a compressor housing specifically geared to s-CO2. 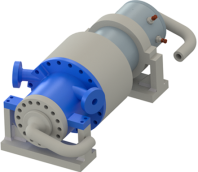 CAD model of a circulator for a Concentrated Solar Power (CSP) system designed by Mohawk; the company is building, and will test, the entire machine in their facilities. The portion in blue (right) is the compressor housing that was printed on VELO3D’s Sapphire 3D metal printer. Image credit: Mohawk Innovative Technology

This is where 3D printing came back into the picture for Mohawk. “Our geometry for this component was pretty strange,” concedes chief engineer Jose Cordova. The housing design is multifunctional: Not only does it support a rotating shaft spinning freely in one of Mohawk’s proprietary oil-free bearings, it also incorporates volutes (curved channels) that provide high-speed intake (at 1,100 PSI) and discharge (at 3,500 PSI) of s-CO2 through the compressor. “To deliver this much functionality in a conventional compressor design would have required combining three separate parts,” says Cordova. “With 3D printing we were able to create a single, compound one.”

“The pressures are so dissimilar between the front and the back of the compressor that we were forced into some pretty clever geometry manipulation to mitigate force imbalance and other issues on this critical, leak-free part of the CPS system,” Cordova says. “What’s more, given the pressures on the supercritical CO2 flowing through this system, and the temperature extremes (from 50 to 550 degrees C) to which it’s subjected, we knew we had to use a nickel-based superalloy like Inconel.”

But Inconel is notoriously difficult to cast—and the casting houses that Mohawk usually worked with either no-quoted the new job or priced it extremely high. “We even discussed an option of casting and machining several parts out of Inconel and welding them together, while the lower temperature parts could be made of stainless steel,” says Walton. “But all the steps involved were very cumbersome and time consuming and we only had 18 months to fulfill this project for the DOE. We realized that we could not make this part by both traditional and existing 3D printing methods; this made us evaluate VELO3D ’s SupportFree process to see if it could accommodate our design and performance goals.”

Partnering with VELO3D for additive manufacturing

VELO3D, the metal laser powder-bed fusion (LPBF) system manufacturer, came highly recommended to Mohawk by a previous contact, and their own research into the company gave Walton and Cordova the confidence to approach VELO3D as a potential partner to help them produce their first-ever 3D-printed part.

After tensile tests on 3D printed Inconel blanks demonstrated that the mechanical properties of 3D-printed Inconel were in line with those of rolled counterpoints from bulk alloy materials, the project was given the go-ahead by Dr. Heshmat.

“The exterior of the compressor housing doesn’t display the complexity of the interior geometry, namely the flow paths, says VELO3D applications engineer Gene Miller. “There were a lot of challenging angles that would typically require support structures, which only add compromises to design and performance. Our technology provides the ability to print down to zero-degree angles without supports, and that proved to be a necessity with the internal volutes.” 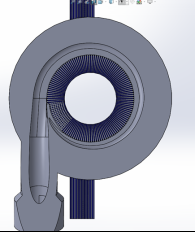 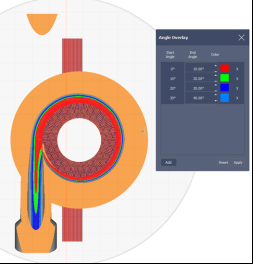 Views of the Mohawk compressor housing from VELO3D’s pre-print software called Flow; left shows view looking up from the bottom of the part, outlining one of the volutes. Right shows areas of the part highlighted by angle. Everything in red was printed at 0-10 degrees, which would be extremely challenging for most 3D metal printing technologies to achieve without support structures. Image credit: VELO3D

“In the most critical areas inside the volutes, where you would have the rapidly flowing s-CO2, we could avoid supports entirely,” Miller says. “As a result, the volute sections printed very well, with very little roughness. Roughness creates drag and compromises efficiency, so in this instance our SupportFree process helped achieve the optimal performance.”

Additive manufacturing delivers on its promise

To set up the design for 3D printing, the native CAD file was brought into VELO3D ’s pre-print Flow software. “We didn’t have to do anything unique with the parameters,” says Miller. “Flow intuitively recognizes features and prescribes generalized process recipes dependent on the geometries’ features.” 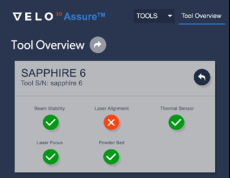 Examples of the quality assurance that is integrated into the VELO3D solution; (left) screenshot of the 1-click calibration capability available directly on the Sapphire printer, which instantly calibrates critical variables such as optics and powder bed quality. (Right) Image from VELO3D’s Assure software which produces a comprehensive build report documenting part quality characteristics; shown is Peak Height, which maps out whether there are any potential protrusions within the build. Image credit: VELO3D

Once the design was set up in the software, the Inconel part was printed in about 3.5 days on a VELO3D Sapphire system at Duncan Machine Products (DMP), the contract manufacturer for this project. DMP offers turnkey manufacturing services, from print preparation to 3D printing to post-processing; this enabled Mohawk to deal with just a single vendor. This kind of streamlined operation also enables an accelerated delivery timeline.

Reproducible and repeatable outcomes are essential for end users to gain trust in the AM process. The ability to measure critical aspects like meltpool status, atmospheric conditions and powder-bed height are vital to informing part quality. VELO3D ’s Assure software monitors and reports these types of characteristics in real-time, indicating off-nominal measurements. Assure captures relevant data points, along with trend analysis, in a comprehensive build report that gives end users actionable information. Many existing 3D metal printers do not provide this level of detail, so end users lack the information to determine both the cause of inconsistencies and at what point they occurred during a build. 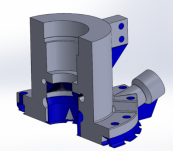 Cross-section of the compressor housing from VELO3D’s Flow pre-print software. Support structures, shown in blue are mostly localized to the base of the part, and were easy to remove manually after printing. Image credit: VELO3D

Fabricating the component via traditional methods would have taken some 20 weeks and cost more than $90,000. Total cost for Mohawk’s part, from start to finish, came in at about 2-1/2 times less than that.

“The quality of the final printed part was excellent,” says Walton. “VELO3D’s printing process is uniquely suited for turbomachinery because it’s the most accommodating. It enables us to provide the DOE with an innovative solution, one that drastically decreases lead time and cost and increases performance. AM comes out way ahead in every way.” 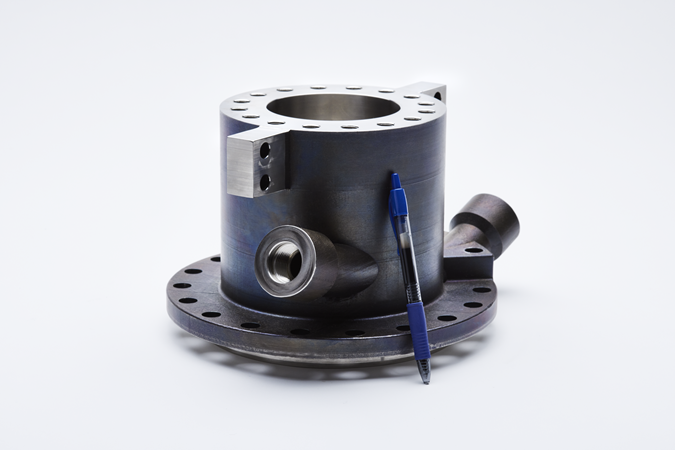 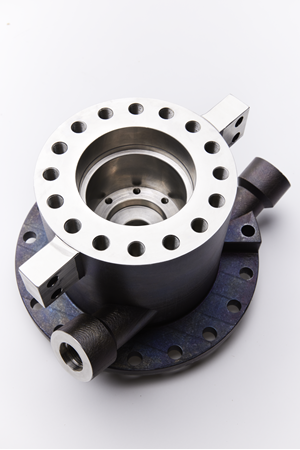 Two views of the finished 3D-printed compressor-housing part. Purple hue on exterior is common after heat treatment. Interior has now been machined, so this is a fully functional prototype, ready for testing by the Department of Energy.

A fresh path to business growth

Mohawk’s engineers are excited about the potential of AM and think it could make a big impact on their business, going forward. “We’re competing with larger corporations with bigger engineering teams but we’ve been winning contracts based on our highly innovative designs,” says Walton. “3D printing opens up new markets for us and is a great fit because our specialty is custom machines.

“People come to us with very specific requirements; by using AM we can avoid huge upfront non-recurring engineering (NRE) costs that would be involved in casting and mold-making. We could price ourselves out of the market on highly complex designs that way, so 3D printing definitely creates new opportunities for cost-efficient prototyping as well as cost-competitive manufacturing of production parts for custom systems.”

This material is based upon work supported by the U.S. Department of Energy’s Office of Energy Efficiency and Renewable Energy (EERE) under the Solar Energy Technology Office (SETO) Award Number DE‐EE0008374.