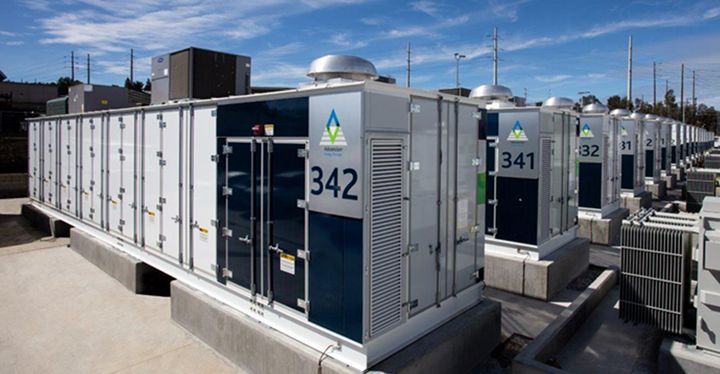 What is an energy storage system?

An energy storage system (ESS) is pretty much what its name implies—a system that stores energy for later use.

ESSs are available in a variety of forms and sizes. For example, many utility companies use pumped-storage hydropower (PSH) to store energy. With these systems, excess available energy is used to pump water into a reservoir during times of low demand. When energy demands rise, the water is discharged from the reservoir and drives a turbine which produces electricity.

PSH systems, though an efficient method of storing energy, are logistically complex and infrastructure intensive. Therefore, they typically are only used in utility-grade installations. And while PSH currently commands a 95% share of energy storage, utility companies are increasingly investing in battery energy storage systems (BESS).

These battery energy storage systems usually incorporate large-scale lithium-ion battery installations to store energy for short periods. The systems are brought online during periods of low energy production and/or high demand. Their purpose is to increase the reliability of the grid and reduce the need for other drastic measures, such as rolling blackouts.

BESSs for both commercial and residential applications represent a small—but rapidly growing—sector of the ESS community. Increasingly, homes and businesses that use renewable energy generators (e.g., solar panels and wind turbines) are also including a lithium-ion BESS into their installation. This allows the storage of power during times of excess energy production and is a better value than selling the power to the grid and then buying it back at a higher price. It also functions as a back-up during instances of power outages.

It is estimated that in terms of BESSs, lithium-ion has a 90% market share worldwide. Applied research and scales of economy in manufacturing have led to decreasing financial outlays for their installation. BESSs’ market share is forecast to grow in exponential terms due to their potential for applications on the horizon as well as the expected increase in traditional usage modes.

What does a battery energy storage system look like?

Lithium-ion BESSs are ubiquitous. You no doubt (indirectly) possess one or more—in your cell phone, your laptop, and if you own an electric car, there too. The reason for such widespread use is their ability to provide high energy density in a small, lightweight package. For commercial-grade installations, the batteries—known as “cells”—are typically held in racks inside a shipping container or custom cube likes structure, outside of the facility it intends to supply, or they are installed in specially engineered rooms in the interior.

Each cell contains both a positive and negative anode with a separator keeping the two apart. Also contained within the cell is an ion-conducting electrolyte. The electrolyte is a combustible or flammable liquid and is comprised of a lithium salt in an organic solvent.

What are the risks/hazards with battery energy storage systems?

BESSs produce a large amount of energy in a small area. This design, while efficient, creates a risk that must be managed. Big energy + small space = potential for problems. While most BESSs operate without experiencing any unfortunate incidents, the risk of failure of one or more of the cells must be taken into consideration and addressed.

The primary risk with BESSs is battery case damage or overheating of the system from an internal fault or externally from exposure to fire. If the risk scenario comes to fruition, the hazard side of the failure equation comes into play. The hazards are the release of toxic and/or flammable gases which often   lead to a probable fire and potential explosion. When risks and hazards are identified in any system, it is incumbent upon the owner or operator to take steps to minimize them.

How is the risk in battery energy storage systems managed?

Fortunately, owners and operators of BESSs have guidance to manage these risks. The increasing popularity and use of lithium-ion battery systems has given rise to standards governing their use. The first such standard was UL® Standard 9540 released in 2014. In 2017, UL released Standard 9540A entitled Standard for Test Method for Evaluating Thermal Runaway Fire Propagation in Battery Energy Storage Systems. Following UL’s lead, the NFPA® introduced the 2020 edition of NFPA 855: Standard for the Installation of Stationary Energy Storage Systems®.

Before delving into specific risk management strategies, it is necessary to understand the failure model for BESS.

A battery cell becomes compromised through mechanical damage, an internal or external thermal event, or through an electrical fault.

Small amounts of gas, typically hydrogen, are generated and released from the cell with an accompanying release of heat; this is known as “off-gassing.”

With increasing heat levels, smoke begins to emit from the cell. The presence of smoke is indicative of an impending catastrophic event in which ignition and thermal runaway are the likely outcomes.

Fire ensues and a chain reaction failure of adjoining cells is probable, along with the possibility of explosion.

Thermal runaway is defined as the situation in which the heat inside of a cell rises much faster than it can be dissipated. This leads to a rapid release of energy which ignites the flammable vapors present from the off-gassing phase. Adjacent cells are adversely impacted by the fire and in turn fail in a similar fashion. This can lead to a domino-like effect in which cell after cell fails and ignites, often with disastrous results. 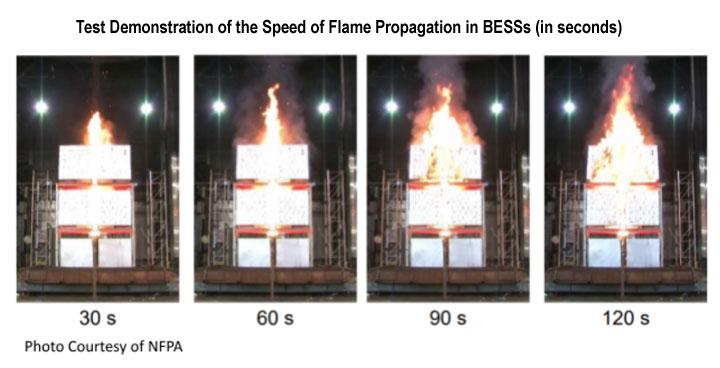 The first line of defense is a battery management system (BMS). The purpose of the BMS is to monitor the charge at the cell as well as the temperature during the charge and discharge phases. Upon detection of temperatures exceeding the safe range, the BMS may shut off power to prevent continued escalation of internal cell temperature.

A BMS is often complemented with the addition of a device designed to monitor the enclosure for the presence of flammable or toxic vapors released during the off-gassing phase. These devices have a quick response time, i.e., ≤ 5 seconds. Upon detection, a signal is sent to the BMS to shut off power to the batteries. A ventilation system may also be activated to expel the flammable vapors from the BESS enclosure.

What happens if there is a fire and how can it be managed?

Fires involving BESSs are problematic for a number of reasons:

Given the special hazard nature of lithium-ion BESSs, special fire suppression systems are in order. Traditional fire suppression systems are often ineffective or inefficient. Take sprinkler systems, for example. While testing has demonstrated them to be effective in extinguishing a lithium-ion battery fire, there are still drawbacks to using them.

The application of water on electronics can cause electrical faults (such as short circuits in the BESS). Additionally, damage to surrounding unburned batteries is likely. The rack installation of cells often impedes the water from reaching the fire. There is a concern regarding the environmental impact of applying copious amount of water during suppression activities that can permeate into the ground water. This water must be contained and processed through a water treatment facility.  Lastly, many BESSs are located in remote areas where water supply is limited or not available.

Fortunately, there is an excellent option for BESS fire suppression. Condensed aerosol units are a proven technology that is available and easily installed. NFPA 2010: Standard for Fixed Aerosol Fire Extinguishing Systems® addresses the use and installation of condensed aerosol systems.

Condensed aerosol units for BESSs act as a total-flooding system and are a listed extinguishing agent for Class A (surface), Class B, and Class C fires. A distinct feature of condensed aerosol units is that they are self-contained and require no piping. This feature alone sets them apart from many other systems that may require extensive piping, a water supply, pressure relief devices, or purpose-built enclosures housing the fire suppression system.

Upon activation, condensed aerosol units discharge an ultra-fine suspension of highly ionized potassium fire suppression particles. These particles bind with the free radicals produced by combustion. This interrupts the fire’s reaction pathway resulting in suppression. In BESSs, the particles remain suspended in air for up to twenty minutes providing protection against reflash.

Reflash is a hazard that must be recognized. Due to the deep-seated nature of BESS fires and the fact that the flammable vapors and heat remain in the container after extinguishment, care must be taken when opening the enclosure. This danger was dramatically demonstrated in 2019 when firefighters in Arizona responded to a BESS fire incident. Upon opening the enclosure, oxygen was introduced, and an explosion occurred. Seven firefighters were injured, and one was killed.

To prevent similar occurrences, it is advisable to cool the interior prior to opening the enclosure. One cost-effective method is the installation of a dry-pipe sprinkler system inside the enclosure. “Dry pipe” implies that there is no dedicated water supply; the system is supplied with water by fire apparatus.

Using a dry pipe system allows only the water necessary for cooling to be discharged vs. a standard sprinkler system which will flow water continuously until shut off by response personnel. A dry pipe system, therefore, prevents unnecessary water damage to unburned batteries.

Battery energy storage systems are an excellent application for energy management and storage. Without a doubt, they will become more prevalent moving into the future. As BESS numbers increase, so does the possibility of a fire or explosion in an installation. Given the violent and dangerous nature of BESS fires, it is critical to recognize and take the necessary steps to mitigate the associated risks and hazards.

A whopping 90% or more of wind turbine fires originate in the nacelle. The nacelle contains the gear box, the generator, the controller, the low- and high-speed shafts, and the brake‚ÄĒand it (the nacelle) sits atop the tower.