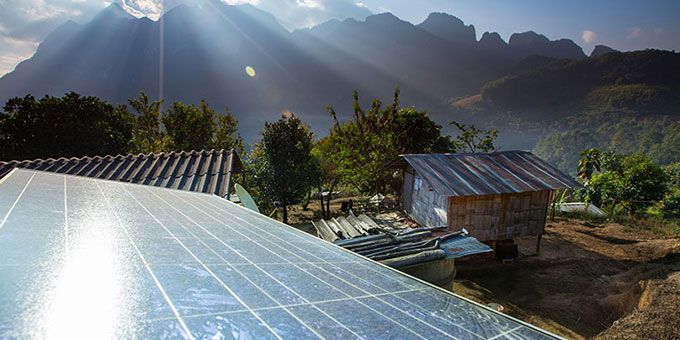 During a power outage or after a disaster, it is hard to beat the simplicity of a diesel generator. Just supply fuel and start it up—so easy, anyone could do it. Renewable microgrids, on the other hand, are not so simple, with their suite of controls, software, and asset coordination. But the beauty of renewables is that fuel is free and already available on-site, even in remote disaster areas.

“NREL’s approach makes it possible to assemble devices into a microgrid without arduous configuration, relying on just renewable energy and amateur electrical experience—perfect for recoveries in a pinch,” said Przemyslaw Koralewicz, NREL engineer and co-developer of the communication-less method.

When NREL experienced a surprise power outage, the laboratory had few options for recovery: No microgrid controller and no preconfigured setup. Just a large battery, solar panels, and wind turbines. Other campuses—or districts, neighborhoods, and homes—could find themselves in similar circumstances, and during an outage is no time to be fumbling with complicated configurations. Like NREL, communities can now implement a resilient microgrid off the cuff, using controls that exist on essentially any energy resource.

While microgrids are an apparent answer for recovery and resilience, the costs of a controller present a barrier to communities. In 2019, NREL found that microgrid controllers have a mean cost of $155,000/megawatt, potentially putting resilient microgrids out of reach for vulnerable areas.

Besides costs, controllers introduce a tangle of communications and system settings, often opaque, proprietary, and designed to suit particular scenarios. These features can be useful for minimizing energy use and costs, but recoveries often call for a quick-and-ready option. NREL’s method prioritizes fail-safe startup, foregoing elaborate programs and communications in favor of exceedingly basic controls, while still allowing more advanced designs to be built on top.

NREL’s scheme is decentralized—the devices do not exchange data or issue commands (i.e., they are “communication-less”). Instead, devices self-regulate using system frequency as the common language. In short, a battery or other power source forms the grid by supplying power at a set frequency. Other generators like solar panels and wind turbines follow the grid by watching frequency and changing their power accordingly.

The method is nothing too new—so-called “droop” controls are familiar in standard fossil fuel generators—which is part of the appeal. The NREL researchers showed that the method works with 100% renewable energy, can be scaled, and is feasible with most any energy device.

What is innovative is that NREL’s method frees the grid frequency from a tight 60 hertz (Hz). Unbound by mechanical rotation, the microgrid frequency can take a wider range. In fact, that range is precisely how the devices coordinate without communicating: As frequency rises past 60 Hz, generators reduce power. At even higher frequencies, the generators reduce their power further, rebalancing the frequency around 60 Hz. The system self-stabilizes, never overcharging the batteries or underserving the loads.

If this sounds more difficult than a diesel generator, it might be. It still requires some device programming and parameter setting, which are detailed in the report.

“NREL’s method is the very first step in a design that could become the standard for fail-safe microgrids,” Koralewicz said. “Our communication-less method could be natively configured in future devices or possibly certified for easy access by operators. With standardized adoption, microgrids of any type—military bases, hospital backups, even networked districts—could count on an unfailing foundation to their day-to-day operations.”

The Frontier of Renewable Energy Systems

At the frontier of power systems, engineers are addressing the technical matters of operating the grid with mostly renewables. Outstanding questions relate to inverters, which are the power electronic devices that interface renewable energy to the grid, and particularly, how inverters can form the grid in ways that fossil-based resources traditionally have. The UNIFI consortium is taking on the inverter challenge with the combined effort of dozens of research institutions, led by NREL.

NREL’s communication-less method is one example of a grid-forming strategy, the sort that will be needed as systems push toward higher levels of renewables. In proposing the method, NREL is breaking ground into some of the trickier topics that confront UNIFI and power systems everywhere, such as how to handle grid protection and which controls should be essential on grid-forming devices. The authors approach these questions in the report, offering one direction that future energy systems can take on the path to decarbonization.