Lincoln International is pleased to present you with the latest DealReader from our global Renewable Energy Industry group.

Following a pick up in acquisition activity during Q1 2014, activity remained above 2013 levels in Q2 2014. Consolidation for producers of solar power continued to be the primary source of deal activity, in addition to significant volume from the private equity / investors category. Activity remained significantly weighted to the more established markets in Europe and North America, with nearly 75% of all transactions in Q2. Activity overall has remained strong in the solar industry with continued consolidation of project portfolios as well as additional vertical integration across the value chain. In addition investment in solar through private investment continues to remain at a strong level given the availability of capital and debt leverage in the market place.

Solar market growth picked up in 2013, after being somewhat level in 2012. The market increased as solar is continuing to become a larger source of power generation, expected to surpass 130 GW of cumulative installed capacity globally this year.

In 2014, the market is expected to continue to grow, but not as strong as it has historically due to continued slowness in the European markets with an offset given the strong growth in Asia and the United States. Moving forward, growth in demand is expected to be driven by price decreases for the balance of solar systems and the development of previously untapped markets. This trend is demonstrated in Chart F, where after an increase in 2014, the solar industry is expected to return to moderate expansion from 2015 to 2018.

Europe has traditionally dominated the solar market, but the rest of the world has been catching up at a rapid pace. In fact, Europe’s share of the market shrunk from 76% in 2011 to 56% in 2013. It is expected that the market will continue to diversify in 2014, with Europe’s share falling below 50%. Outside of Europe, the market is well-balanced. China, the United States and Japan are leaders with great potential for future growth. In 2013, China became the second largest solar market globally ahead of Italy, Japan and the United States, as illustrated in Chart G. These four geographies were followed by developing countries who could represent strong geographies for PV growth in the future.

Currently, the split between rooftop and utility-scale solar installations is weighted toward the rooftop segment, as shown in Chart H. However, this separation is expected to contract in the future as utility-scale plants are forecasted to exhibit faster growth globally. In certain markets, such as the U.S., rooftop projects are still expected to experience faster growth as solar leasing programs and other financing structures provide more availability to residential and small commercial projects. 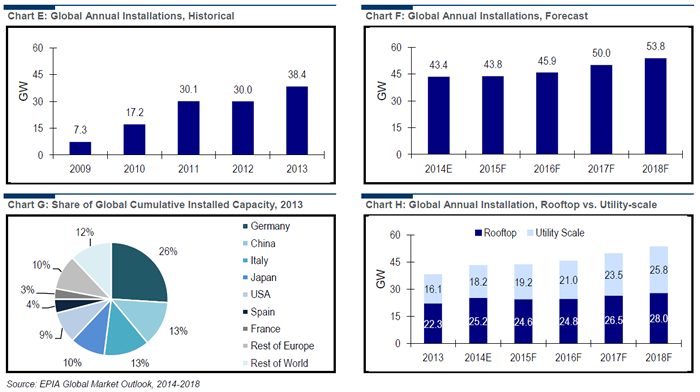