As the PV business continues to grow, new backsheet constructions are continually being introduced. But the products we use in our efforts to be more sustainable have a bigger footprint than we think. Currently, there are at least ten commercial manufacturers of traditional PV backsheets, with traditional products in the development stage. Traditional backsheets, the protective covering on solar cells, are produced mainly from polyester and Tedlar films. Polyester is made from petroleum and Tedlar is solvent-cast using DMAC, a highly toxic industrial solvent. Both of these products defeat the purpose of clean, green energy, and as the demand for solar energy increases, so does this issue. 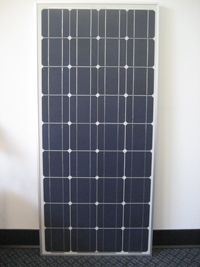 Production Size PV Module with BioBacksheet
One thing is certain: significant cost reduction of all PV module components is required in order to attain grid parity. Bio-based backsheets have a definite edge over traditional backsheets because of their potential to be much cheaper with the additional benefit on reducing our dependency on petroleum and protect the environment – a benefit that is hard to put a price on.

Stanley B. Levy brings over four decades of engineering expertise and technical experience in the areas of plastics and film development to his current role as vice president and chief technology officer of BioSolar, Inc., a company that has developed a breakthrough technology to produce bio-based materials from renewable plant sources.

A holder of a dozen patents and numerous industry awards for technical excellence, Dr. Levy’s expertise is widely recognized in the industry and he is a sought after speaker and the author of numerous published articles.

Dr. Levy helped lead the polymer revolution during his 27-year tenure with DuPont, the globally-renowned science company, where he contributed his technical expertise to the development of many of the industry’s highly successful, premiere film materials, including: Teflon, Mylar and Kapton.

He was formerly a consultant on module packaging for photovoltaic manufacturing companies including: Global Solar, MiaSole, and Solar Integrated Technologies. In addition, he is a member of the National Renewable Energy Laboratory's Thin Film PV Module Reliability Team.

With over two decades of engineering, marketing, sales and executive management experience in high technology, BioSolar, Inc. Chief Executive Officer Dr. David D. Lee founded the company in 2006. An electrical engineer, Lee recognized that historically, manufacturing costs have been one of the biggest barriers to driving down the cost per kilowatt of solar energy for consumers. In response, BioSolar was the first company to introduce a new dimension of cost reduction by replacing petroleum-based plastic solar cell components with durable bio-based components derived from renewable plant sources.

For decades, solar equipment manufacturers have been heeding the words of legendary inventor Thomas Edison, who famously exclaimed: "I'd put my money on the sun and solar energy." Dr. Lee is helping to answer the global demand for clean, renewable energy sources by not only making solar energy more environmentally-friendly, but simultaneously driving down the cost.