Waste Heat to Power (WHP) creates electricity by heating a fluid at high pressure, then expanding the fluid through a turbine to power an electric generator.

First we talk with Philip Brennan, CEO and Co-Founder about the business side of the Echogen Power Systems Heat Engine.

How does Echogen Power Systems define itself today? 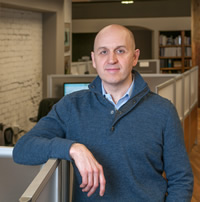 Echogen Power Systems®, www.echogen.com is a leading producer of large-scale heat-to-power systems.  As a technology development company, we are focused on developing innovative heat-to-electricity power generation systems that use supercritical working fluids to transform heat into power without creating new emissions. This technology drives value for the client through its unique combination of a lower cost per unit of electricity produced, compact footprint, higher energy recovery from the waste heat stream, and ability to generate power from a wider range of heat sources than competing technologies available in the marketplace today and to do so without the use of increasingly scarce water resources.

We developed a Heat Recovery System that is an advanced power generation cycle for usable waste heat recovery. Our process captures heat energy which would normally be lost and converts it into higher value, usable power.

Our engineers have leveraged the proven Rankine cycle technology to yield significant improvements in performance, sustainability, energy efficiency and cost savings over existing solutions. We can deliver power at up to a 35% discount versus steam based alternatives that dominate the market today.  We achieve this by harnessing CO2 in a closed loop, which allows us to deliver a 50% more compact, flexible, and low-cost thermal engine to our customer. Our scalable heat engine is able to deliver a wide range of power outputs, from 1.5 MW of power up to 48 MW of net power. Our flexible system allows our customers to source power back to their facility, or to sell to the local utility for alternative returns.

What is waste heat?

The term “waste heat,” refers to the thermal energy produced by machines, electrical equipment, and industrial processes that escapes into the environment unused. Often this waste heat can be recovered and used for other purposes. Recovery of this waste heat represents the most cost effective means to produce clean power, at a significant discount to both solar and wind.

Why is waste heat to power so important?

Global electricity production has almost doubled in the last twenty years and is expected to increase another 60% by 2030. The increase in CO2 emissions from power generation needs to be actively managed. Environmental regulations and economic considerations challenge energy consumers to be more efficient in the generation of power. Remarkably, the most valuable source of clean power has been overlooked. Every year, thousands of potential megawatts are lost in the form of industrial waste heat. Industrial operations consumer over 30% of the energy produced, and roughly 1/3 of this energy escapes as thermal loss. In the United States alone, there is the potential to recover over 10,000 MW   of power from industrial and gas powering operations which equates to a market size of $35 billion.

We can capture the economic value of waste heat with our proven technology in the development of an advanced waste heat-to-power cycle.

How does waste heat to power work?

Waste Heat to Power (WHP) creates electricity by heating a fluid at high pressure, then expanding the fluid through a turbine to power an electric generator. In a classic steam Rankine waste heat system, the turbine is turned by a pressurized water vapor (steam), which has been boiled by the waste heat stream. The steam is then cooled off and condensed to liquid water, pumped back to high pressure, and begins the process again. Most WHP systems today are adaptations of the original Rankine design – a system that takes heat from an external source and converts it to power (work) through a closed-loop thermodynamic system.

Step 1: Cooled water leaving the condenser is pumped to the boiler.

Step 2: The waste heat source heats the water in the boiler, causing the water to boil and become pressurized steam.

Step 3: The pressurized steam is injected into the turbine, which causes the turbine blades to spin. The turbine is connected to a generator, which creates electricity.

Step 4: The steam leaving the turbine is sent to the condenser to convert back to liquid water before the cycle begins again.

What are typical uses for waste heat?

The most common uses for waste heat are:

The first two options are generally economical, but require a local use for the recovered heat. The third option creates a product, electrical power, which can be consumed onsite or is easily transmitted and has high economic value.

Where is the opportunity for waste heat to power?

The greatest potential source for WHP generation is in power generation and industrial sectors. In 2009, the industrial sector consumed the largest amount of energy in the United States, accounting for more than 30 percent of all domestic energy consumption.

Roughly one-third of this energy consumed by industry is discharged as thermal losses due to inefficiencies.

What are major sources of industrial waste heat?

Energy intensive processes—such as those occurring at refineries, steel mills, glass furnaces, and cement kilns—all release hot exhaust gases and waste streams that can be harnessed by a heat engine to generate electricity. Some specific operations that create valuable, high-temperature waste heat are:

Now here is a discussion with Timothy Held, Chief Technology Officer about the technology behind the systems.

Can you provide a system overview of the EPS heat engine?

The EPS heat engine uses industrial grade CO2 as the working fluid, which does not have practical temperature or pressure working limits. The pump compresses liquid CO2 to high pressure. The CO2 then passes through a combination of internal and external heat exchangers before entering the turbo-expander, which drives the shaft that in turn drives a generator. The CO2 then exits the turbine, and passes through the internal heat exchangers to recover any residual energy from the fluid, and finally enters the condenser where it is converted back to liquid CO2. Exiting the condenser, the liquid CO2 re-enters the pump to repeat the cycle. 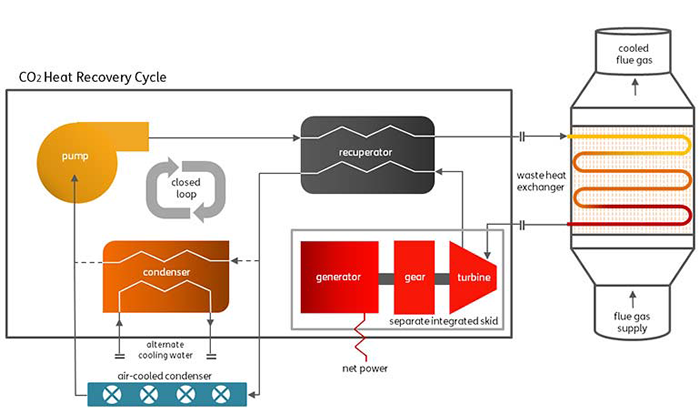 What applications does your waste to power focus on? 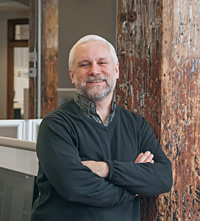 Our power generating cycle has application ranging from bottom cycling in gas turbines for primary power generation, industrial waste heat recovery, solar thermal, geothermal, and hybrid alternatives to the internal combustion engine. Our patented technologies operate over this broad range of heat sources to extract a significant amount of energy and convert it into higher value, usable power.

What other ways does your technology reduce the carbon footprint?

Reducing industrial CO2 emissions is a global priority, and we are exploring how to apply our technology to address this need. One common approach to reducing carbon footprint is through carbon sequestration.

How does Echogen’s technology contribute to carbon sequestration?

The Geological Carbon Sequestration/Geothermal Heat Extraction (GCS/GHE) Program combines the Echogen supercritical CO2 (sCO2) turboexpansion cycle with carbon sequestration potential in natural sedimentary reservoirs found in the United States. With our partners, Lawrence Berkeley National Laboratory (LBNL) and the University of Texas at Austin, Bureau of Economic Geology (BEG), Echogen is developing a power plant/turbine system for geothermal applications. While CO2 is being pumped into an injection well for sequestration, a portion of the CO2 can be extracted through nearby wells. This geothermally heated CO2 can be expanded through Echogen’s turboexpander for power production. The expanded CO2 is then cooled and reinjected through the main well to complete the cycle. 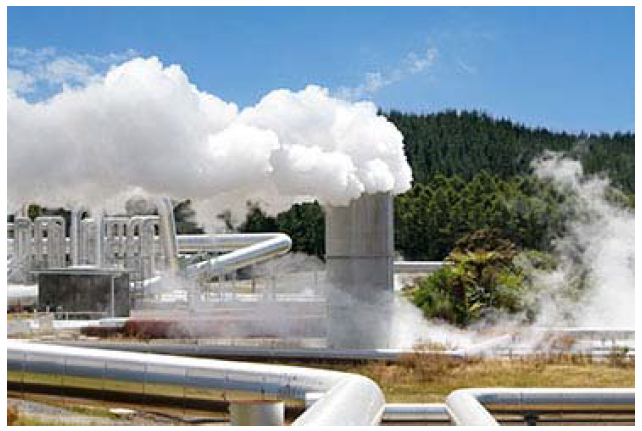 The demonstration unit is intended to verify that the application of an open CO2 system can provide positive output power using “geothermal energy” coupled with geologic carbon sequestration. Our work supports the first-ever field trial of the proposed power plant at a selected site that is being used for carbon sequestration investigation. Echogen is taking the lead in developing this technology.

Where did Echogen’s solution originate?

Echogen’s first prototype, completed in 2007, was a version of the “Champagne” absorption heat pump using carbon dioxide and a preferred secondary fluid. Echogen then converted the heat pump to a WHP engine, reducing to practice a first approach to the power generation cycle. A second prototype system, completed in early 2009, used pure carbon dioxide and proved that a transcritical cycle heat engine could be built to produce electricity from waste heat for commercial applications, and established a development pathway for first production units.

What is Supercritical CO2?

“Supercritical carbon dioxide” (sCO2) describes the fluid state of carbon dioxide when it exceeds its critical temperature and critical pressure. In this state, it assumes properties intermediate between those of a gas and a liquid, and in fact loses the distinction between gas and liquid phases. Its high density manifests itself in an equipment set with a very small footprint. sCO2 is a non-flammable, low-toxicity, non-corrosive, thermally stable working fluid. Because of these properties, sCO2 can interact more directly with the heat source, eliminating the need for a secondary thermal loop, and further reducing the total installed cost of the system.

Properties of supercritical CO2 allow for:

Philip Brennan co-founded Echogen Power Systems in 2007 with Michael Gurin and has led the company as its’ CEO since 2009. He has 25 years of leadership in general management, business development, marketing and sales with both Fortune 100 companies and entrepreneurial start-ups. He has led and managed a variety of businesses, ranging from early stage companies, to turnarounds to $200 million + product lines.

Over his career, Mr. Brennan has conceived, developed, and launched over 100 new products in the plastics, nutraceuticals, food and packaged goods industries, and has secured over $60 million in equity and grant funding while preparing companies for the next stage of growth.

He has held senior and executive management positions across multiple disciplines for Pfizer, Warner Lambert, and Rubbermaid and was the youngest recipient of Georgetown University's Graduate Fellowship for the Masters in Business Administration.

When he’s not working, Mr. Brennan and his wife can be found playing zone defense on their five children. They enjoy travelling with their clan and immersing themselves in all aspects of the cultures they experience especially while travelling internationally.

Dr. Held (Ph.D., Princeton University, B.S.A.A.E. Purdue University) previously managed the Commercial Engine and Industrial Aeroderivatives Combustor Aero Design groups for GE Aviation, where he led the product introduction team for the GEnx TAPS low emissions combustor technology, and the design teams for conventional and Dry Low Emissions (DLE) combustors for the LMS100, the largest aeroderivative gas turbine in the world. He was also responsible for the design of a 15ppm NOX combustion system for the LM6000 and the dual-fuel DLE combustor for the LM2500. He also served as the technical leader for alternate fuels research and evaluation at GE Aviation, where he led the engine evaluation team for the first flight demonstration of a biofuel blend in a Virgin Atlantic 747. He presently holds 19 issued patents, with several additional in process.

After hours, Dr. Held enjoys spending time with his wife and four children, and occupies his occasional spare time working with his hands, either rebuilding and restoring old equipment, or working in his garage on whatever his latest project might be.