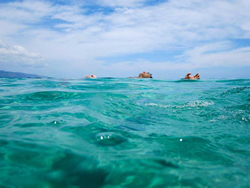 USAID recently announced the winners of the Desal Prize, part of a competition to see who could create an affordable desalination solution for developing countries. The idea was to create a system that could remove salt from water and meet three criteria: it had to be cost-effective, environmentally sustainable, and energy efficient.

The winners of the $125,000 first prize were a group from MIT and Jain Irrigation Systems. The group came up with a method that uses solar panels to charge a bank of batteries. The batteries then power a system that removes salt from the water through electrodialysis. On the most basic level, that means that dissolved salt particles, which have a slight electric charge, are drawn out of the water when a small electrical current is applied. In addition to getting rid of salt (which makes water unusable for crops and for drinking), the team also applied UV light to disinfect some of the water as it passed through the system.

Using the sun instead of fossil fuels to power a desalination plant isn't a totally new idea. Larger solar desalination plants are being seriously investigated in areas where water is becoming a scarce resource, including Chile and California. While proponents hope to eventually could provide water to large numbers of people, the technology is still expensive (though prices are dropping) and requires a lot of intricate technology.