Study: U.S. could run entirely on renewable energy by 2050 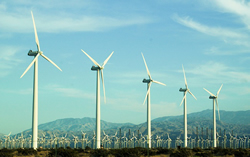 A new study has mapped out a potential plan for the United States to completely transition to clean, renewable energy by 2050.
According to the research study leader Mark Z. Jacobson, a professor of civil and environmental engineering at Stanford, the process would demand significant upfront costs, but over time would be roughly equal to the costs of maintaining the fossil fuel infrastructure currently in place.
“When you account for the health and climate costs – as well as the rising price of fossil fuels – wind, water and solar are half the cost of conventional systems,” Jacobson said. “A conversion of this scale would also create jobs, stabilize fuel prices, reduce pollution-related health problems and eliminate emissions from the United States. There is very little downside to a conversion, at least based on this science.”
Among the positives of switching to clean energy: reducing air pollution in the U.S. that is responsible for approximately 63,000 Americans each year, and eliminating greenhouse gases produced by fossil fuel that would cost the world approximately $3.3 trillion per year by 2050, per a phys.org report.
More EVs and Fuel Cells Stories | Articles | News